On Thursday, the Federal Reserve Banks of Chicago and Kansas City released updates regarding farm income, farmland values and agricultural credit conditions from the fourth quarter of 2017.  The Federal Reserve Bank of St. Louis issued a similar update earlier this month.  Today’s update highlights core findings from the three reports.

David Oppedahl, a Senior Business Economist at the Chicago Fed, explained on Thursday in The AgLetter that, “Farmland values in the Seventh Federal Reserve District had an annual increase of 1 percent for 2017, following three consecutive yearly declines. Values for ‘good’ agricultural land in the fourth quarter of 2017 were overall unchanged from the third quarter, according to 185 survey respondents representing agricultural banks across the District.”

The Fed report explained that, “Agricultural credit conditions in the District deteriorated once again in the fourth quarter of 2017.

Repayment rates on non-real-estate farm loans were lower in the October through December period of 2017 than in the same period of 2016, and rates of loan renewals and extensions were higher—which indicated greater stress in the credit environment.

Thursday’s update noted that, “With farmland values up slightly for 2017, the District avoided exceeding the three consecutive years of declines seen in 1984–86. In the fourth quarter of 2017, Indiana, Iowa, and Wisconsin had year-over-year increases in agricultural land values, while Illinois had a decrease.” 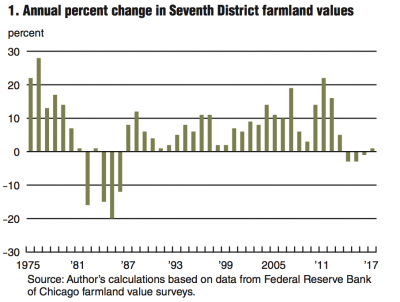 The AgLetter also pointed out that, “In real terms, there has been a 10 percent correction in the District’s farmland values from their peak in 2013 to the end of 2017. Even so, the index of inflation-adjusted farmland values for the District was 58 percent higher in 2017 than at its previous peak in 1979.” 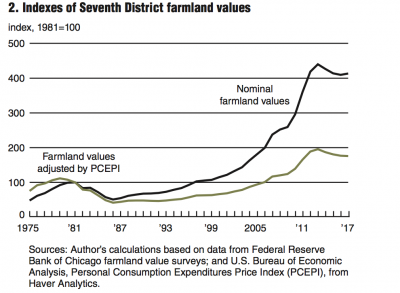 The Chicago Fed noted that, “The productivity of District farmland helped stabilize the value of agricultural ground in 2017. Based on calculations using U.S. Department of Agriculture (USDA) data, the District states’ corn yield set a record of 193 bushels per acre in 2017, edging up 1 percent from 2016. However, the District states’ soybean yield dipped 5.7 percent in 2017 from 2016—to 54.8 bushels per acre (still the second-highest soybean yield ever).”

The Agricultural Finance Monitor, released earlier this month by the St. Louis Fed, stated that, “A majority of agricultural bankers in the Eighth Federal Reserve District reported that farm income declined during the fourth quarter of 2017 compared with a year earlier. This finding is consistent with the past several surveys. Although bankers were modestly more optimistic about the near-term prospects for farm income, they still expect income in the first quarter of 2018 to fall below year-earlier levels.” 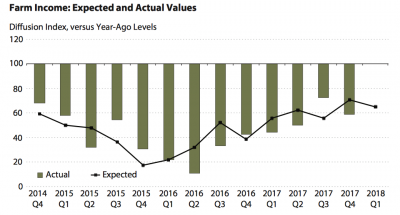 With respect to farmland values, the report stated that, “Quality farmland and ranch and pastureland values posted solid increases in the fourth quarter from a year earlier.

“Cash rents for both land categories also increased in the fourth quarter from a year earlier.”

Nathan Kauffman and Cortney Cowley, writing in Thursday’s Ag Credit Survey from the Kansas City Fed, noted that, “Farmland markets held firm in the fourth quarter, according to the Tenth District Survey of Agricultural Credit Conditions. On average, values for all types of farmland declined only 3 percent from a year ago. Prior to the fourth quarter, farmland values had declined at an annual pace of 5-7 percent, but those declines appear to have slowed more recently. 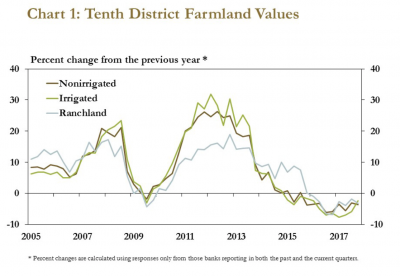 The Kansas City Fed update stated that, “Looking ahead, more bankers indicated they expect farmland values to remain steady. More than 40 percent of bankers surveyed expected cropland values in the coming year either to increase or remain unchanged.”

Turning to farm income, Thursday’s report explained that, “Farm income continued to decline but at a slower pace than in previous quarters. In addition to some stabilization in farmland markets, smaller declines in farm income also suggested that the farm economy in the Tenth District may be stabilizing. Several bankers commented that producers seem to be adjusting slowly to lower commodity prices. One adjustment made by producers is a reduction in capital spending and household spending. These expenses continued to decrease in the fourth quarter, but also have shown some signs of stabilizing from sharper declines in 2016.” 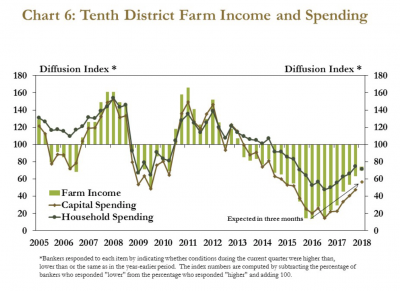 The Fed update also noted that, “Similar to farm income, agricultural credit conditions stabilized modestly but continued to show signs of weakness. The pace of decline in farm loan repayment rates abated somewhat, as fewer bankers reported lower repayment rates compared to previous quarters. Demand for new farm loans and renewals or extensions on existing loans also increased at a slower rate than in previous quarters. Despite signs of stabilizing in the fourth quarter, bankers’ expectations were for loan demand to strengthen and loan repayment rates to weaken slightly in the first quarter of 2018.” 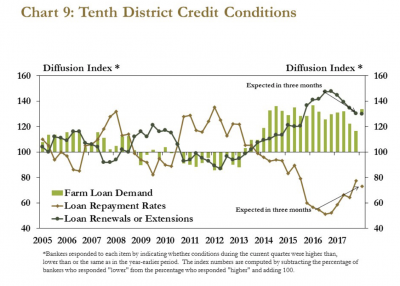 In conclusion, Kauffman and Cowley pointed out that, “Farm income declined in the fourth quarter and credit conditions remained relatively weak, but farm real estate continued to provide support for the District’s agricultural economy.

“Still, ongoing demand for financing amid a low income environment and slightly higher interest rates suggests that credit risks in the farm sector still remain a focus for 2018.”