Today’s update highlights recent information on U.S. agricultural exports from the U.S. Department of Agriculture, and also explores agricultural related trade issues that have been identified in recent news articles.

The ERS/FAS update indicated that, “Fiscal 2018 agricultural exports are projected at $139.0 billion, down $800 million from the revised fiscal 2017forecast of $139.8 billion, largely due to reductions in corn and cotton export forecasts.

Corn exports are forecast down $1.6 billion to $8.0 billion due to lower volumes and unit values. Strong competition from South America is expected to trim exports.

With respect to where U.S. ag exports are going, the quarterly update explained that, “Agricultural exports to China are forecast $300 million higher than fiscal 2017 to $22.6 billion, primarily due to increased soybean and dairy exports, which more than offset reductions in cotton. Exports to Canada and Mexico are forecast at $21.2 billion and $18.8 billion, respectively, both up from 2017.” 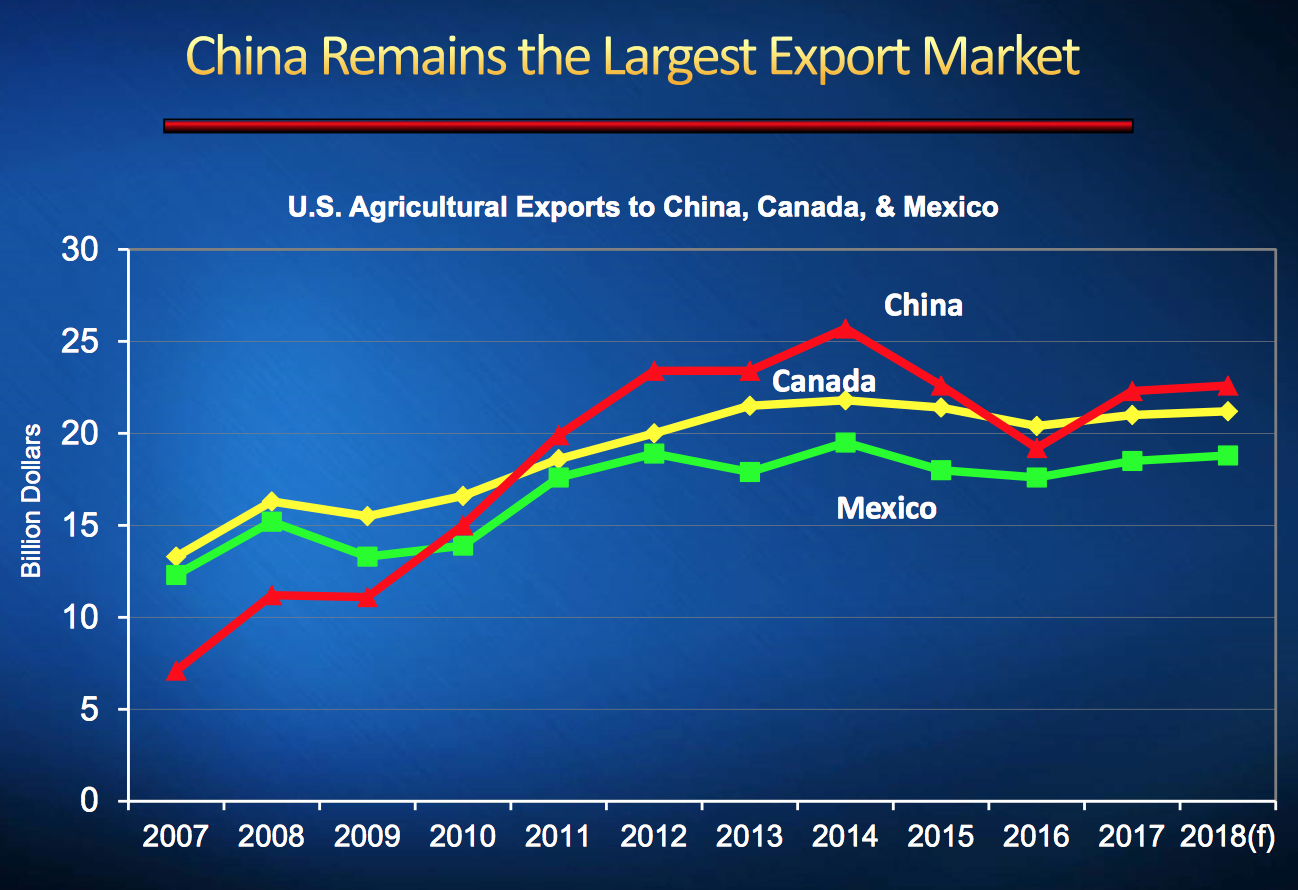 The ERS/FAS trade update added that, “The fiscal 2018 forecast for oilseeds and products is projected at $33.0 billion, up $500 million, driven mainly by record soybean export volumes. U.S. soybean production is also forecast at a record, and is expected to pressure soybean prices lower, especially on the heels of a record 2017 South American harvest. This is expected to spur additional demand and will limit the impact of weaker prices.” 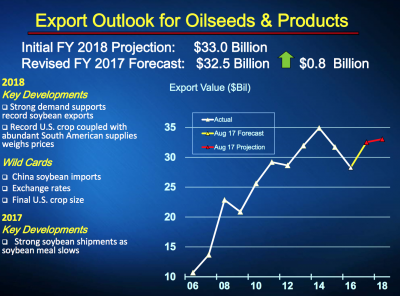 Regarding pork exports, yesterday’s ERS report stated that, “U.S. pork exports in August were 390 million pounds, a volume almost 4 percent lower than a year ago. The decline is primarily attributable to lower shipments to China/Hong Kong (-53 percent). Export volumes to the 10 largest foreign markets in August are summarized below, along with country shares of U.S. exports.” 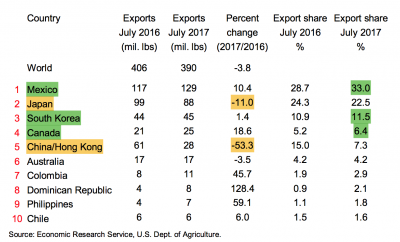 The ERS update added that, “China pork import data for July shows a 52-percent decline from a year earlier; a dramatic decline, but China continues to import pork at a historically high level. It is notable from the figure below that imports bounce and then fall, but ratchet upward in each cycle. The apparent long-term trend is upward.” 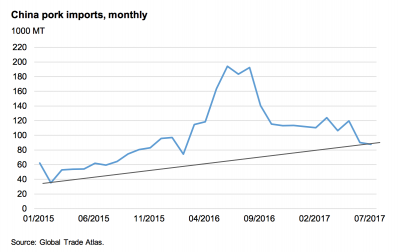 DTN Ag Policy Editor Chris Clayton reported late last week that, “Pork producers can say they are optimistic about the current state of trade, but leaders of the National Pork Producers Council are concerned the U.S. may be falling behind competitors such as the European Union in opening trade markets.”

The DTN article stated that, “While NAFTA and South Korea are important, Japan is the top market for U.S. pork products, valued at about $1.6 billion last year. The EU has reached a trade deal in principle with Japan, though the details have not been hammered out.

‘That No. 1 market in Japan, we’re afraid that’s going to decay and we’re going to lose that because the Europeans are now going to have a leg up on us,’ [Ken Maschhoff, president of NPPC and a producer from Carlyle, Illinois] said.

“Nebraska Gov. Pete Ricketts spoke to reporters separately Thursday during a state trade mission in Japan. DTN asked Ricketts about his understanding of the impact of the European Union trade deal with Japan. Ricketts pointed out Nebraska alone exports about $200 million in pork to Japan.”

In a separate DTN article last week, Chris Clayton reported that, “Agriculture and food were the focus of a forum on the North American Free Trade Agreement on Wednesday as several Beltway insiders highlighted their concerns about the possible direction of the NAFTA renegotiation.”

Mr. Clayton explained that, “The trade experts also pointed out that the three countries have put themselves on a tight schedule compared to the time it often takes to negotiate multi-nation trade agreements. This is more difficult considering the NAFTA talks will be heading into the third round later this month in Ottawa, Canada, while the chief agricultural negotiator in the U.S. Trade Representative’s Office and the trade undersecretary position at USDA are still unfilled. Those vacancies have disrupted communication channels between the industry and the Trump administration, said Gary Martin, president and CEO of the North American Export Grain Association.

“The grain industry has been forced to use different ways of communicating messages to explain where the industry is coming from, he said.”

And William Mauldin reported on Monday at The Wall Street Journal Online that, “President Donald Trump’s trade chief on Monday said China represents an ‘unprecedented’ threat to the world trading system, saying its state-driven economic system poses a ‘substantially more difficult’ challenge than in the past.”

Mr. Mauldin indicated that, “[U.S. Trade Representative Robert Lighthizer], in one of his first lengthy public appearances outside of Capitol Hill, put China at the center of the Trump administration’s concern that the global trading system isn’t serving American workers and farmers well. The focus on Beijing echoes Mr. Trump’s 2016 campaign message and illustrates the administration’s emphasis on trade deficits. China sent $347 billion more in goods to the U.S. than the U.S. exported there in 2016.

“Mr. Lighthizer mentioned only the Beijing government by name in his prepared remarks and didn’t refer in the speech to accelerated talks to renegotiate the North American Free Trade Agreement with Canada and Mexico.”

The Journal article added that, “‘We’re moving at warp speed but we don’t know whether we’re getting to a conclusion,’ Mr. Lighthizer said in answer to a question about Nafta. ‘We’re running very quickly somewhere,’ he said. In contrast, he expressed optimism that future trade talks with the U.K. will be successful.

“The Trump administration has sought to put heavy pressure on Mexico and Canada, which haven’t welcomed some U.S. Nafta ideas, including a possible provision to have Nafta ‘sunset’ every five years if it isn’t renewed. Mr. Lighthizer declined to comment on the sunset idea and wouldn’t discuss Nafta provisions.”