“Drowning In Grain”-Reuters Special Report on the Global Grains Glut

Reuters writer Rod Nickel reported yesterday that, “On Canada’s fertile Prairies, dominated by the yellows and golds of canola and wheat, summers are too short to grow corn on a major scale.

“But Monsanto Co is working to develop what it hopes will be North America’s fastest-maturing corn, allowing farmers to grow more in Western Canada and other inhospitable climates, such as Ukraine.

“The seed and chemical giant projects that western Canadian corn plantings could multiply 20 times to 10 million acres by 2025 – adding some 1.1 billion bushels, or nearly 3 percent to current global production.”

The question, amid historically high supplies and low grain prices, is whether the world really needs more corn. 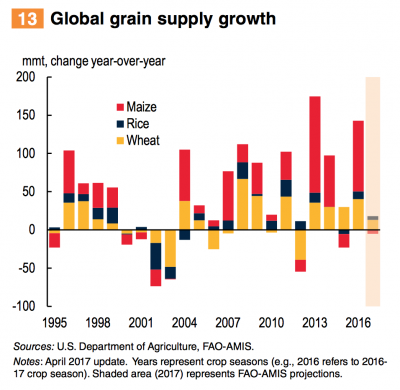 “Based on the USDA’s April assessment—the last for the current season—combined global supplies (i.e., beginning stocks plus production) of wheat, maize, and rice are projected to reach 2,856 mmt this season, 5 percent higher than last season. These projections, which are almost final, imply that 2016-17 will be the fourth consecutive surplus year. Furthermore, FAO- AMIS preliminary projections for 2017-18 point to yet another surplus year.” Commodity Markets Outlook Quarterly Report. World Bank (April 2017). http://pubdocs.worldbank.org/en/174381493046968144/CMO-April-2017-Full-Report.pdf

“The bin-busting harvests of cheap corn, wheat and soybeans are undermining the business models of the world’s largest agriculture firms and the farmers who use their products and services.

Some analysts say the firms have effectively innovated their way into a stubbornly oversupplied market.

The Reuters article noted that, “Never has the world produced so much more food than can be consumed in one season. World ending stocks of total grains – the leftover supplies before a new harvest – have climbed for four straight years and are poised to reach a record 638 million tonnes in 2016/17, according to USDA data.” 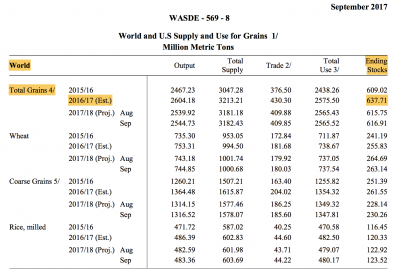 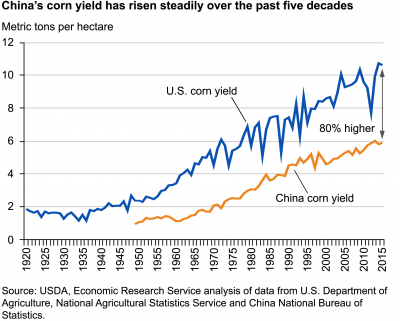 With respect to the impacts of large global food supplies on and food prices, Mr. Nickel stated that, “Abundant supplies have helped lower food prices across the world, but the benefit to consumers and impoverished nations is muted by several factors, including problems with corruption and distribution of food in developing regions, said Sylvain Charlebois, professor of food distribution and policy at Canada’s Dalhousie University.”  (Note that a recent FAO report pointed out that world hunger is actually on the rise).

And when focusing on U.S. farmers, the Reuters article explained that, “Even as farmers reap bountiful harvests, U.S. net farm incomes this year will total $63.4 billion – about half of their earnings in 2013, according to a U.S. Department of Agriculture forecast.

Lower incomes mean farmers cannot spend as much on seed, fertilizer and machinery, extending their pain to firms across the agriculture sector.

Later, the Reuters article explained that, “Even if U.S. or Brazilian corn crops suffered major weather damage, the world would still have the expanding Black Sea corn region to tap, not to mention China’s enormous supplies, said [Paul Bertels, vice-president of production and sustainability at U.S.-based National Corn Growers Association].” 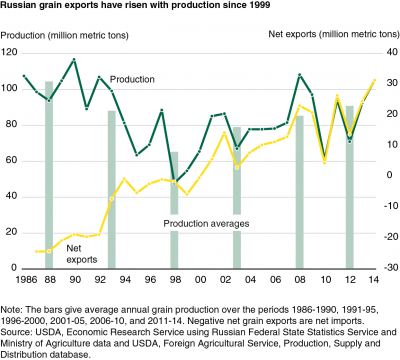 “As grain production rose steadily after the late 1990s, Russia switched from being a small grain importer to a major exporter. The country currently exports about 35 million metric tons (mmt) of grain a year. In 2015-16, Russia supplied 10 percent of total world grain exports.” “Agricultural Recovery in Russia and the Rise of Its South,” by Nicholas Rada, William Liefert, and Olga Liefert. Amber Waves. USDA-ERS (April 25, 2017).

“China’s stockpiling policies, enacted in 2007 when corn supplies were tight, also stimulated oversupply. Aiming for self-sufficiency in grains, Beijing bought virtually the entire domestic crop each year and paid farmers as much as 60 percent more than global prices.” 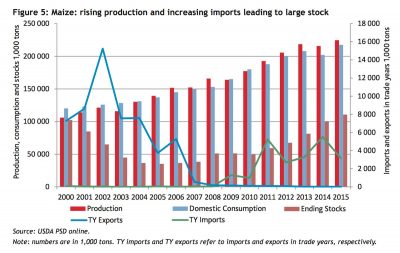 “Maintaining high levels of domestic stocks of grains and other commodities of importance has been part of China’s food security strategy.” “How China’s Farm Policy Reforms Could Affect Trade and Markets: A Focus on Grains and Cotton,” by Wusheng Yu. International Centre for Trade and Sustainable Development (March 2017).

“The program stuffed Chinese warehouses with some 250 million tonnes of corn by the time Beijing scrapped it last year. China is now boosting incentives for farmers to switch to soybeans from corn.”

Also with respect to China and corn, Wall Street Journal writer Lucy Craymer reported yesterday that, China’s agricultural exports to North Korea rose sharply in July and August, amid rising geopolitical tensions and at a time of year when the food supply in the isolated nation is usually at its lowest.”

“In July and August, China corn exports jumped to a total of 34,964 metric tons, nearly 100 times the levels seen in the year-earlier period. Rice exports increased 79% to 17,875 metric tons, while exports of wheat flour surged more than elevenfold to 8,383 metric tons, according to China’s Customs data.”

Ms. Craymer noted that, “Meanwhile, the jump in corn exports to North Korea comes as China has been trying to sell down its overflowing corn stockpiles, which are estimated by the U.S. Department of Agriculture at around 110.8 million metric tons. Those efforts have been met with limited success since China began overhauling the sector in early 2016.

“Beijing doesn’t release information on its stocks, but market players think much of the corn is no longer fit for consumption. Some of it is four years old and might be fit only to be made into ethanol.”