During the “Adams on Agriculture” interview (audio replay here (MP3- 7:14); unofficial FarmPolicyNews transcript here) Mr. Adams queried: “What we’re hearing and reading [on Farm Bill progress] doesn’t sound real positive. Are you at a stalemate? Is there any compromise or breakthrough that you can tell us about?”

Rep. Peterson explained, “We’ve made very good progress this week. We’ve had a number of calls. Right now we’re waiting on scores on a couple of things. And that’s kind of what held us up yesterday afternoon, because we don’t have these couple of things that were put on the table by Chairman Conaway, I guess it was Tuesday, which get us, in my opinion, in the range of getting this thing done.

You know, it would have been good, I think Senator Roberts said it would have been good if we could have got here a month ago. But you know, these things have a way of just kind of, you know, taking their own path. So at least we’re here now. I think we’re really at a point here where I can see how we can get this thing done. But we’ve got to get a couple scores and there’s still some compromises that need to be made. You know, I’m optimistic.

When asked about issues associated with the SNAP provisions, Rep. Peterson noted that, “I think we can get this worked out but, you know, it’s really how far Senator Roberts and Stabenow think they can go to maintain the Senate support for this bill and how far Chairman Conaway is willing to go.

“I told him I think if we come up with a reasonable compromise here, I can deliver a significant amount of Democrats for this bill. So I think we can get…this is really not what’s held the bill up the past couple of weeks. It’s really not been SNAP. It’s been these other issues. And as I say, we’re making good progress, and I can…having been through a number of these, I can kind of see where this thing can come together.” 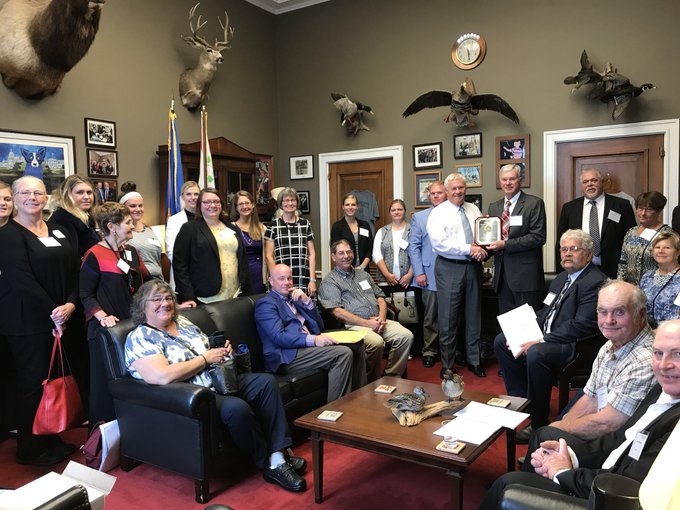 We met with Rep. @collinpeterson this morning and got an update on the #FarmBill conference committee. There’s a lot of work to be done yet. We also presented him with an @NFUDC Golden Triangle for his support of family farmers! #NFUFlyin18

Meanwhile, on Friday’s “Agriculture Today” radio program from the Red River Farm Network, Rep. Peterson reiterated that the nutrition title is not what is holding up progress on the Farm Bill at this point: “There are other things that have been brought into this that are expensive,” he said.

The nutrition title still an issue in farm bill chats, but @collinpeterson tells @rrfn that’s not what’s holding up progress at this point. A dispute regarding title one and the conservation title are causing delay.

When asked if he could elaborate, Rep. Peterson indicated that, “No, I don’t really want to get into it too much.”  He noted that there has been a dispute between Senator Stabenow and Chairman Conaway.

To listen to a replay of the Farm Bill segment from the “Agriculture Today” show with Carah Hart and Rep. Peterson, just click here (MP3- 1:20).

More narrowly on the conservation issue, Mike Adams specifically asked Rep. Peterson on Friday: “What about conservation? Have you come to agreement there?”

Rep. Peterson replied by saying, “Close. You know, we’re a lot closer. That’s not as big a sticking point as the commodity title has been, so I think we can work that out.  It’s…I don’t think there’s a disagreement about what we’re trying to do here at the end. It’s just kind of almost semantics and so forth, so I think it’ll get worked out.” 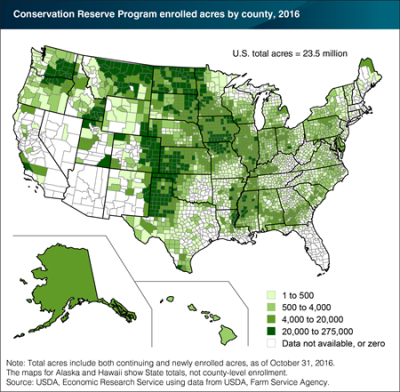 “As of the end of 2016, the Conservation Reserve Program (CRP) covered about 23.5 million acres of environmentally sensitive land in the United States.” USDA- Economic Research Service, https://goo.gl/wkWc1J (March 28, 2017)

And on the logistics of timing, Mr. Adams inquired, “Do you think we could have a new Farm Bill passed by the end of this month?”

Rep. Peterson indicated that, “I think it’s going to be difficult.  You know, because I don’t…at this point, you know, when these CBO scores are going to come through, we don’t know if it’s going to be today or whatever. My staff, who have been through a lot of these, they tell me that even if we get all this stuff wrapped up, you know, by Sunday or Monday, it’s still going to be very difficult to get this final thing drafted, to get it scored, to get it to the conferees, you know, to be signed and so forth by the end of next week.”

He added, “So I think if we can get this resolved this week and come to an agreement and then we’re in the process of drafting it and finalizing it. You know, I think…I don’t know exactly…the Senate’s in…whether we’re going to be in, I think I’ve heard there’s a possibility that we will be around to be able to pass a bill in October. So that’s the majority’s decision, but I think we can get this done.”

In other Farm Bill related news, Melanie Zanona reported recently at The Hill Online that, “Democratic and Republican negotiators are also still working to hammer out differences between the House and Senate versions of the farm bill, which authorizes a number of key food and agriculture programs that are set to expire at the end of the month.

“The House-passed version of the legislation would impose tougher work requirements on participants in the Supplemental Nutrition Assistance Program (SNAP), which provides food stamps for low-income Americans.

“But conferees have struggled to reach a compromise, with Democrats staunchly opposed to the food stamp changes, prompting Trump to weigh in [see tweet below].”

Senator Debbie Stabenow and the Democrats are totally against approving the Farm Bill. They are fighting tooth and nail to not allow our Great Farmers to get what they so richly deserve. Work requirements are imperative and the Dems are a NO. Not good!

The Hill article stated that, “Conaway swatted down the idea that a short-term farm bill may be necessary, but he also told The Hill that he wouldn’t vote for the farm bill if it doesn’t overhaul SNAP.

“Stabenow said she was committed to reaching a bipartisan agreement before the end-of-the-month deadline [see her response to President Trump’s tweet below].”

In case you missed it, the Senate passed a bipartisan #FarmBill that got 86 votes – the most ever. I’m not letting politics distract me from working across the aisle to finalize a good bill that will deliver certainty for farmers and families in Michigan and across the country.

Bob Campbell reported on Wednesday at the Odessa American (Tex.) Online that, “With the current Farm Bill set to expire Sept. 30, House Agriculture Committee Chairman Mike Conaway of Midland said today that he had been working overtime to get senators to accept the House’s more stringent requirements for food stamp recipients.

“Explaining that the current five-year bill too liberally allows waivers for SNAP’s job-seeking and employment regulations, the Republican said some farm state senators are willing to compromise in the House and Senate Conference Committee ‘because they want a farm bill.’”

As a Member of Congress who serves on @HouseAgDems and represents a district where 1 in 5 households receive SNAP — I know from first-hand accounts the devastation families across Philadelphia will face if SNAP is cut.

That’s why I’m doing all that I can to #ProtectSNAP!

Ryan Voyles reported Thursday at the Decatur Herald & Review (Decatur, Il.) Online that, “While lawmakers hash out the details of what will become the next Farm Bill, U.S. Rep. Rodney Davis on Wednesday stressed his continued support for changes to the Supplemental Nutrition Assistance Program, or SNAP, that would toughen work requirements for food stamp recipients. ”

The article noted that, “The work requirements are a key sticking point in the agriculture and nutrition bill. The provision requires most able-bodied adults ages 18 to 59 to work or participate in job training for 20 hours a week to receive benefits. Davis said connecting recipients with job training and future employment is the only way to help them get ahead and stop needing the assistance.

“Davis said the government already offers job training and education opportunities, but they would be more effective and reach more people if connected to SNAP benefits.”

With so many open jobs in the country there has never been a better time to look for a job. The #2018FarmBill will bridge the gap for #SNAP recipients who are either unemployed or underemployed to help them find work to support them and their households.

And Pat Donahue reported on Friday at The Suwannee Democrat (Live Oak, Fla.) Online that, “U.S. Sen. David Perdue is waiting for the pending Farm Bill to answer a critical question for him — what constitutes a family farm.”

The article noted, “Perdue, elected in 2014, said the Farm Bill should have been passed already but he has some difficulties with it.

“‘We have some things that are not as advantageous to Georgians as we thought they would be,’ he said, ‘particularly on the definition of what is a family farmer.’” 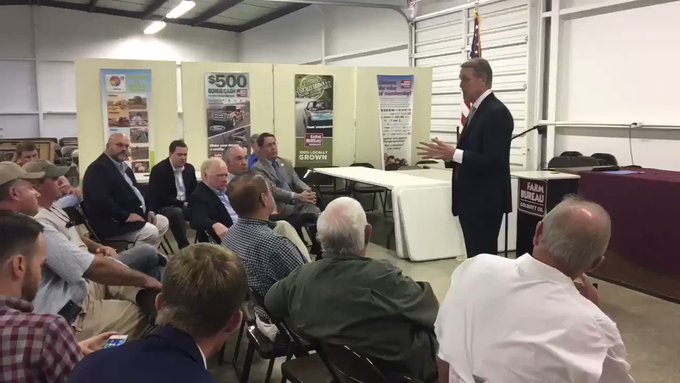 Had a productive discussion w/ the Colquitt County Farm Bureau. Our farmers’ input is critical as we continue working to make the ag industry safer, stronger, & more successful.

“Perdue, a member of the Senate Agriculture, Nutrition and Forestry Committee, said under the proposed guidelines a family farm where a spouse does the books for the operation may not be considered a family farm.

“‘Georgia has a lot of small family farms,’ he said. ‘We want to encourage young people to go into agriculture. This would discourage them.’”