The U.S., Mexico and Canada concluded a second round of NAFTA discussions yesterday as President Trump has continued to criticize the trade measure.  Meanwhile, concerns surfaced over the weekend about the possibility of a U.S. withdrawal from the South Korean trade pact that went into force in 2012.  However, subsequent remarks from U.S. Trade Representative Robert Lighthizer yesterday appeared to mitigate the likelihood of that happening.  President Tump’s recent trade activity was strongly criticized in an opinion column today by Robert B. Zoellick, a former World Bank president, U.S. trade representative and deputy secretary of state.  Today’s update provides an overview of recent news articles highlighting these trade issues, which have important implications for U.S. agricultural producers.

Patrick J. McDonnell reported yesterday at the Los Angeles Times Online that, “Representatives of the United States, Mexico and Canada declared progress but unveiled no breakthroughs at the conclusion Tuesday of a second round of talks to revise the North American Free Trade Agreement.

“Still unresolved are a number of controversial issues, including Washington’s desire for expanded use of U.S.-made materials in automobiles and other products and disagreements about the mechanisms for resolving trade disputes and whether steps should be taken to raise salaries for Mexican workers.”

The L.A. Times article noted that, “‘We must have a trade agreement that benefits all Americans and not just some at the expense of others,’ U.S. Trade Representative Robert Lighthizer said Tuesday at a news conference with Mexican and Canadian officials. ‘I am hopeful we can arrive at an agreement that helps American workers, farmers and ranchers, while also raising the living standards of workers in Mexico and Canada.’”

Mr. McDonnell added that, “The prospect of NAFTA’s demise has also drawn deep concern from U.S. agriculture, automakers and other industries that have benefited from the agreement. Some U.S. farm states are heavily dependent on exports to Mexico.”

A third round of talks is scheduled for Ottawa from Sept. 23 to Sept. 27.

Wall Street Journal writers William Mauldin and Dudley Althaus reported yesterday that, “The second round of Nafta talks in Mexico City wasn’t intended to result in major breakthroughs or serious horse-trading among negotiators, and more substantive progress is expected in the third round later this month in Ottawa, officials said. Canadian Foreign Minister Chrystia Freeland said the second round built on the preparatory work of the first round in Washington.”

The Journal article pointed out that, “An adverse political backdrop isn’t helping negotiators with a goal of wrapping up talks around the end of the year and submitting a new Nafta for approval in the countries’ congresses and parliament as soon as next year.

“President Donald Trump, who made criticism of Nafta a centerpiece of his 2016 campaign, recently renewed threats to pull out of the trade agreement, which has bound North American economies through shared commercial rules and duty-free trade for 23 years.”

And Alan Rappeport reported yesterday at The New York Times Online that, “After five days of discussions in Mexico City, trade negotiators from the three countries said they were encouraged by the talks’ cooperative tenor and remained confident that they could reach a deal by the end of the year.”

Despite their optimistic tone, however, there was no public discussion of the thorniest points of contention between the countries.

The Times article explained that, “The lack of concrete progress raises questions about whether the three countries will be able to rewrite Nafta this year, if at all. Thus far, Canada [related article] and Mexico [related article] have made it clear that they will not be cowed by Mr. Trump’s threats to unilaterally scrap the trade agreement, a move that would most likely damage the United States economy.”

Meanwhile, Bloomberg writer Mario Parker reported last week that, “President Donald Trump may be eyeing a Nafta exit, but his agriculture secretary is trying to get him to see the merits of the trade deal.

“Secretary Sonny Perdue said [August 30th] he’s been trying to convince the Trump administration the North American Free Trade Agreement is ‘good for U.S. agriculture.’ The trade deal just has some ‘rough edge’ that need to be smoothed for improvement, he said during a presentation at an industry event in Decatur, Illinois.”

Mr. Parker indicated that, “The U.S. is one of the world’s biggest agricultural exporters, and Canada and Mexico are major buyers. Tearing up the 23-year-old deal between the neighboring countries could put Trump at odds with his rural base, with farmers and ranchers dependent on trade for their livelihood. Companies including Cargill Inc. and Tyson Foods Inc., the largest U.S. meat company, have called on the administration to protect agriculture during the negotiations.” 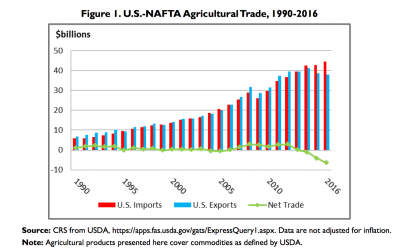 Jacob M. Schlesinger, Michael C. Bender and Jonathan Cheng reported on Sunday at The Wall Street Journal Online that, “The Trump administration is weighing giving notice to South Korea of plans to withdraw from a five-year-old bilateral trade pact, with a decision arriving as soon as this coming week, according to people familiar with the matter.”

The Journal writers noted that, “A break in the South Korea trade pact also would be seen by some critics as a sign of further American withdrawalfrom economic engagement in the region, following Mr. Trump’s January pullout from the 12-nation Trans-Pacific Partnership trade pact, which had been negotiated by former President Barack Obama with Japan, Australia, Malaysia, Vietnam, and others, but was never ratified by Congress.

“Under the terms of the [South Korean trade] pact, either side can pull out by giving 180 days notice.”

New York Times writers Glenn Thrush and Gardiner Harris reported over the weekend that, “The [trade] debate comes as the United States and South Korea are working together to try to combat a growing nuclear threat from North Korea, which said on Sunday that it had tested a hydrogen bomb that could be mounted on an intercontinental ballistic missile. It is a more powerful weapon than the atomic bomb it had tested in the past.”

The Times article added that, “The possibility of abandoning the agreement has alarmed economists and some members of the president’s own party who fear that such a move would force South Korea to block American manufacturers and farmers from a lucrative market.

‘The president and Nebraska have a basic disagreement about trade,’ said Senator Ben Sasse, a Nebraska Republican who has frequently criticized Mr. Trump. ‘His administration holds 18th-century views of trade as a zero-sum game. I side with our farmers and ranchers who are feeding the world now.’

Jacqui Fatka reported on Monday at Feedstuffs Online that, “Reports indicate the Administration may issue on Tuesday a notice of intent to withdraw from the Korea-U.S. Free Trade Agreement (KORUS). Agricultural groups were quick in issuing a stern warning that withdrawal from the pact, and the larger strategy of brinkmanship with regard to trade agreements by the White House, could have disastrous consequences for the nation’s farmers.”

However, Shawn Donnan and Jude Webber reported yesterday at The Financial Times Online that, “Donald Trump’s top trade negotiator appeared to back away on Tuesday from a widely criticised threat to pull out of a trade pact with South Korea, after a loud backlash from Congress, farmersand the US business community.

“Speaking to reporters in Mexico City, Robert Lighthizer, the US trade representative, said he hoped that the Korea-US deal that went into effect in 2012 could be renegotiated to help reduce the US trade deficit with Seoul. But he made clear that his focus was on continuing negotiations rather than pulling out of the Korus pact.”

Jacob M. Schlesinger and William Mauldin reported yesterday at The Wall Street Journal Online that, “The Trump administration’s chief trade negotiator said Tuesday that he is looking to negotiate some changes to the Korea-U.S. free-trade agreement and that he is hoping for a ‘successful discussion’ with the South Koreans—avoiding any mention of a possible termination of the five-year-old pact.”

The Journal article stated that, “Iowa Republican Sen. Joni Ernst wrote her own letter to Mr. Trump ‘to express my strong concern’ about the pact’s possible abrogation, saying that it ‘has been particularly favorable for American agriculture.’ [The Korean trade pact] has given American farmers better access to that long-closed market.”

Also, Robert B. Zoellick, a former World Bank president, U.S. trade representative and deputy secretary of state, penned an opinion column in today’s Wall Street Journal, which noted in part that, “Donald Trump’s trade policy is speeding toward a shipwreck. Under the Constitution, Congress has principal authority over trade, although it has delegated considerable powers to the executive. Congress needs to reassert control to block Mr. Trump’s crack-up.”

Mr. Zoellick added that, “This trade policy will unravel vital ties across the Asia-Pacific region, hurt an ally facing a security crisis, destroy a North American partnership that should be the foundation for U.S. global power projection, and subvert confidence in the U.S. around the world. Congress can no longer wait for Mr. Trump to speak and act sensibly. It needs to assert its constitutional powers over trade to stop this president’s destruction.”