On Thursday, the Senate Finance Committee held a hearing to consider three nominees for key trade positions, while the Senate Ag Committee questioned two nominees for Undersecretary posts at the USDA.  Today’s update highlights some key points from the hearings, including issues related to agricultural trade and the Conservation Reserve Program.

Gregory Doud, the nominee to be Chief Agricultural Negotiator at the Office of the U.S. Trade Representative, was one of the three witnesses to provide testimony at the Finance Committee hearing.  In his opening remarks, Mr. Doud indicated that, “America’s farmers and ranchers understand that their future and their new wealth, as Thomas Jefferson would put it, depends upon the ability to export the food and fiber they grow to the 95% of the world’s population that lives outside the United States. They also understand, as do I, that these efforts can take years to accomplish and require a unique combination of strategy and relationship building.”

One area where work is needed is Japan.

“We are at a particularly critical juncture in terms of our competitiveness for U.S. meat exports into Japan. Failure to address this situation immediately does not bode well for our fiercely competitive and rapidly expanding production of beef, pork and poultry. In fact, this is not only true for Japan but for all Southeast Asia as well.” At the Finance Committee hearing, Ag Committee Chairman Pat Roberts (R., Kans.) indicated that, “As we progress in the renegotiation of NAFTA, pretty much the ag industry has made it clear that the number one priority is to do no harm. NAFTA has widely been viewed as successful, at least within the agriculture community and all those related, and also successful for all three countries, Canada, Mexico and the United States.”

In response to a question from Sen. Roberts, Mr. Doud explained that,

Senator, it’s hard to overstate the importance of NAFTA to U.S. agriculture.

“Those are our second and third biggest markets. I think the number is that they account for $38 billion of about $138 billion in U.S. agricultural exports are just to those two countries. I saw a statistic the other day, that amounts to 287,000 jobs in the U.S., just agriculture, to the NAFTA countries. So there are things that we can upgrade.” “China, Canada, and Mexico are the top destinations for U S agricultural exports.” From “Ag and Food Statistics- Charting the Essentials, 2017 (USDA-ERS).”

“And with regard to Korea, that is an enormously important market for meat. That 40% tariff that we had in beef, bringing that down has made that over a billion dollar market for us now on the beef side of the equation. There are always things and ways you can improve these markets, but we have to maintain them, Senator.”

Sen. Roberts added that, “I’m just going to make the point that if we don’t do something quickly, this farm situation is going to become even more difficult, and it’s difficult right now. And to use a term from my predecessor, way back in the House days, you either have to sell it or smell it. And we’re about right there. We have to export our products.

So I would ask you to consider—and my time has run out, and we’ll just toss this out as an admonition—do what you can to get our trade policy back to being robust and a reliable supplier, and quit letting countries take our markets, because that’s what they’re doing right now, and that’s what farmers and ranchers and growers are upset about, as well as everybody with the related industries in agriculture.

Sen. John Thune (R., S.D.) stated at the hearing that, “Mr. Northey, you’ve worked at USDA now—with USDA, I should say, over three terms as the Iowa Secretary of Agriculture, and I’m sure that you’ve been frustrated, as I have, over the bureaucratic processes that sometimes hamper achieving desired results. As an example, during this past drought stricken summer on the Northern Plains, extreme forage and grazing shortages forced many grazing livestock producers to reduce their herds. CRP emergency haying and grazing was a critical source of feed.

“And I appreciate Secretary Perdue’s cooperation in opening CRP for haying and grazing, yet it took weeks for approval to open up all reasonably available acres. As one of your first priorities, I want to urge you to review administrative processes in the three mission areas under your jurisdiction and see what we might be able to do to expedite some of these administrative authorities when needed. Is that something you would commit to doing?”

Continuing, Sen. Thune asked, “Based on your experience as Iowa Secretary of Agriculture, would you agree that more flexibility in the management of CRP, such as allowing CRP practices to be grazed on a limited basis, or hayed one-third of each contract every year, would enhance the productivity and simplify the management of the CRP program?”

Mr. Northey noted that, “Yeah, I think there’s certainly…it’s important to be able to understand the needs and opportunities for producers and provide some flexibility within the guidelines of the program, and so I’m…if confirmed I’m very interested in being able to talk about additional flexibilitiesand understand what the law allows and what would be beneficial to producers and to managing that natural resource.” 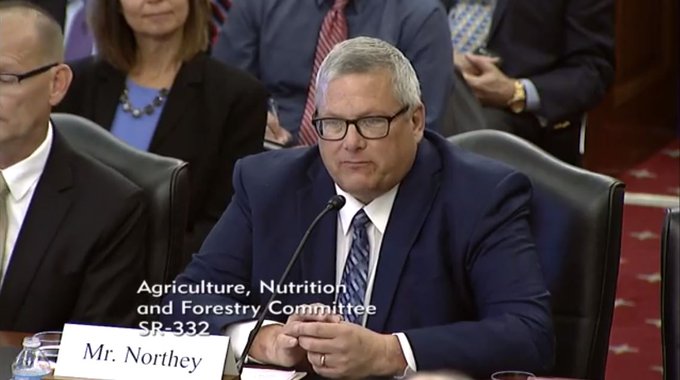 Sen. Thune also inquired about the number of acres in the CRP program, saying  that, “[W]e have a substantial demand for CRP right now, both for general and continuous enrollment. And CRP plays a critical support role in our state for what is our world class pheasant hunting. It’s estimated to provide about almost $300 million annually to South Dakota. What plans do you have to reinstate CRP open enrollment for the next general signup? And does USDA support a higher acreage cap, as I do, as part of the 2018 Farm Bill? And just so you know, I support raising it to 30 million acres. It’s at 24 right now under the current farm bill.” 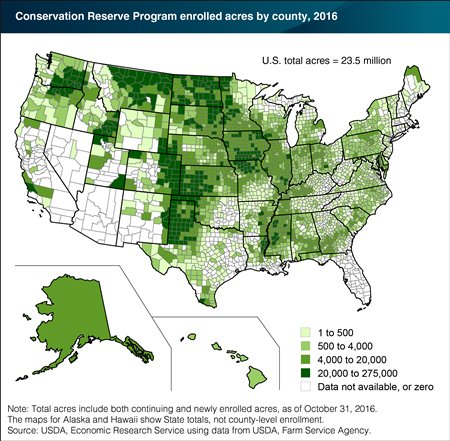 Mr. Northey replied by saying that, “I know there’s a lot of conversation about the acreage cap going into the next farm bill. Certainly look forward to being a part of those conversations, if confirmed. Need to have conversations with our Secretary Perdue and be able to understand exactly what the administration’s support is. But CRP is an important program and answers many of the natural resource needs that are out there.”

And Sen. John Hoeven (R., N.D.) indicated on Thursday that, “But we’re down to 24 million acres, and there’s a pretty strong demand out there for it, particularly with the current lower commodity prices and so forth.”

Mr. Northey explained to Sen. Hoeven that, “There was an impact by hitting the cap this last year, and so I’m not close enough to have been a part of the conversations within USDA, and so not been briefed on those pieces. But within the countryside of Iowa there were some folks that would have liked to have been able to get their acreage into CRP. We’ve hit the cap on some of the continuous enrollment CRP as well.