CoBank recently released a report that explored a variety of issues that will impact the U.S. agricultural economy in 2019.  Meanwhile, recent news items have discussed issues associated with farm lending and farm income.  Today’s update briefly highlights core points from the CoBank report, and also looks at the recent news items discussing important elements of the agricultural economy.

A new report from CoBank (“The Year Ahead: Forces That Will Shape the U.S. Rural Economy in 2019“) outlined ten areas of focus in assessing the year ahead, including a closer look at the U.S. farm economy and trade issues.

Continually rising costs in agriculture, though, are expected to squeeze farmers and ranchers, causing further margin erosion and financial stress in 2019.

“Rising production costs span the agricultural sector. Costs ranging from interest expense to labor and seed will march higher in tandem with growth in the broader U.S. economy. Farm production expenses in 2018 were at the highest level since the peak in 2014.  Further increases in 2019 would put production costs still closer to record levels but with no comparable increase in farm income on the horizon.” 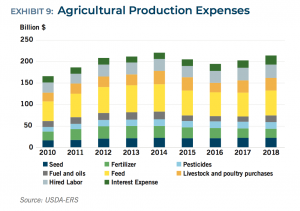 More specifically, Mr. Ehmke explained that, “Interest expense in particular is quickly eroding margins in agriculture as farmers lean harder on debt to continue farm operations. Surveys of rural banks by the Federal Reserve banks in Chicago, Kansas City and Dallas show fixed interest rates for farm operating loans have kept a steady pace with the rise in the federal funds rate.” 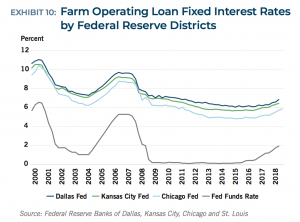 Mr. Ehmke stated that, “With a less-than-positive outlook for agricultural net farm income, demand for loans in farming households continues to grow. 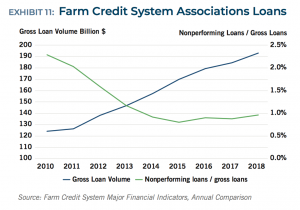 “Strong land values remain the positive for farmers and ranchers. Another year of higher interest rates and declining farm incomes, though, will continue to pressure farmland valuesin regional areas if more farmers sell land to raise capital. For farmers and ranchers who have borrowed against the equity in their land, a drop in local land values would add further financial stress to their balance sheets.”

Farmers cannot bank on a fourth consecutive year of above-trend crop yields to make up for low commodity prices and rising costs. To steady the agricultural economy, and boost revenues, the sector is dependent on substantive breakthroughs in trade policy.

While discussing trade issues in the CoBank report, Tanner Ehmke and Dan Kowalski noted that, “Three significant trade-related issues must be solved this year to restore some normalcy to agricultural markets: legislative approval of USMCA, removal of the steel/aluminum retaliatory tariffs, and substantive improvement of trade relations with China.

“Congressional approval of USMCA will be much more challenging under a divided Congress. Democrats will require additional labor and environmental enforcement mechanisms to be included in the bill before they will support its passage. Reaching the finish line will require several administrative steps before Congress will debate the merits of the trade deal, so final approval is unlikely to happen before Q2, or perhaps the second half of the year. However, we do expect the trade deal to pass all three nations’ legislative bodies in 2019.”

With respect to China, the CoBank report indicated that, “The outcome of the 90-day ‘cease-fire’ with China will be the most pivotal event for U.S. agriculture in 2019. We expect some progress to be made by the March deadline, but a substantive deal that is acceptable to both sides will likely require more time. Critical differences related to issues such as IP rights and forced technology transfer remain, and will be difficult to overcome. However, China has reportedly offered to increase its purchases of U.S. goods significantly, in an attempt to bring bilateral trade into balance. This type of arrangement would have a measurable impact on U.S. agricultural exports. Without this type of deal, exports to China will remain well below past levels when 2019 comes to a close. The U.S. agricultural sector will aggressively attempt to develop alternative markets in 2019 to prepare for a sustained, smaller share of China’s agricultural purchases.” 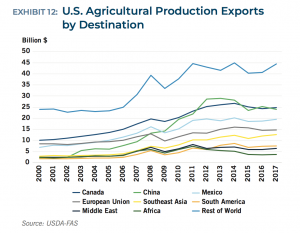 The CoBank report noted that, “As a result of the trade war, the value of total U.S. agricultural exports in 2019 is expected to fall to $141.5 billion, down $1.9 billion YoY, according to USDA’s latest projections. The loss of soybean exports will account for most of the decline.” 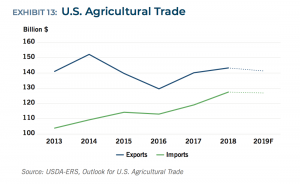 In summary on trade issues, the CoBank report explained that, “The lack of certainty in trade policy on a number of fronts, combined with a resilient U.S. dollar, makes for a discouraging export outlook for agriculture in 2019.  Progress in negotiations is likely to be slow, which spells more pain for months to come. Access to key markets will remain limited and downward price adjustments will persist, both hurting margins and opportunities for U.S. agriculture.”

Earlier this month, Minneapolis Star Tribune writer Adam Belz reported that, “Bankers in some parts of the Midwest are tightening the screws on farmers in the new year. 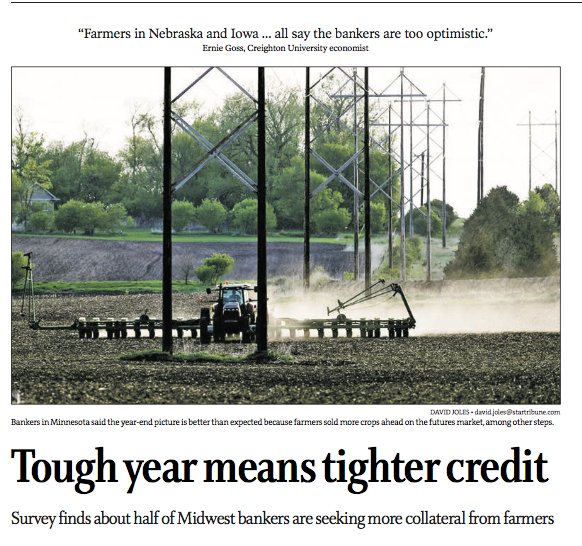 “Survey finds about half of #Midwest #bankers are seeking more collateral from #farmers.”

“Fifty-two percent of bankers in a 10-state area said they have boosted collateral requirements for farm loans, according to the Rural Mainstreet Index, a survey of business conditions conducted by Creighton University in Omaha.

Meanwhile, a recent update at FarmWeekNow Online reported that, “U.S. farmers likely will have to borrow more money to plant their crops this year.

‘We saw a huge jump in operating loan volume from the fall of 2017 to the fall of 2018,’ Brewer said. ‘This tells me there’s less liquidity out there. I expect farmers will need a larger operating note for the spring of 2019.’

And an update this month by Brad Lubben from University of Nebraska Extension (“Farm Programs, Payments, and Prospects“) stated that, “Barring significant market recovery or further trade assistance, producers will be managing for relatively low market prices and relatively little farm program support in 2019. A new farm program decision in 2019 could provide additional payments in 2020, but regardless, producers will need to manage their risk carefully, including not just farm programs, but also production, insurance, and marketing decisions that all contribute to a portfolio approach to risk management.”