Recent updates from Purdue University, the University of Illinois, and Iowa State University provide a snapshot of variables impacting the U.S. agricultural economy in 2019.  Today’s update looks briefly at key points from each of these three land grant university reports.

With respect to cash rental rates and farmland values, Professor Craig Dobbins indicated that, “Historically a decline in cash rent of 5% is a significant change in this extremely competitive market. The tight margins do not provide room for cash rents to increase.

For next year, cash rents are more likely to be flat or down with a higher probability of stable cash rents than declining cash rents. 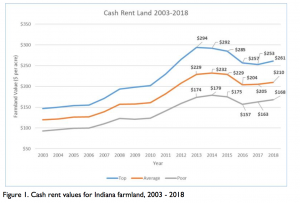 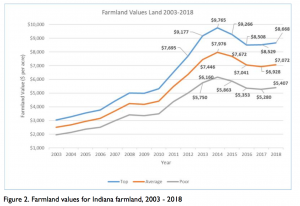 More broadly, Dr. Dobbins noted that, “Tight margins, uncertainties about trade negotiations and tariffs, and rising long-term interest rates are likely to be negative enough to keep the farmland market from increasing in 2018. While there is continued concern about the financial strength of farmers, there is no pending crisis that is likely to force an increased supply of land on the market.

It is expected that farmland values are likely to remain steady, with the possibility of a small decline if the trade news is negative.

Professor Russell Hillberry discussed trade issues in the Purdue report, and pointed out that, “Recent negotiations between the President and the Chinese premier seem to have halted further escalation for now, but there seems to be little progress on the removal of trade barriers that were put up this year.

“While further escalation seems less likely than deescalation, prospects for a return to normalcy are quite low. U.S. soybean farmers will continue to bear a significant share of the costs of the trade war with China.”

In a closer look at soybean prices, Professor Chris Hurt noted in the Purdue update that, “Chinese purchases of U.S. beans this year (through December 6, 2018) are down 98% as they have made good (so far) on their threat to avoid buying U.S. origin.  The reduction in Chinese purchases is 772 million fewer bushels, which has not been offset by 305 million bushels of greater purchases by the rest of the world.” 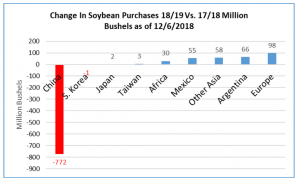 Dr. Hurt added that, “Most will want to hold some inventory for the possibility of a favorable negotiated settlement with China and/or for some harmful growing weather in South America in the next few months. These possibilities could result in March 2018 futures testing $10.”

Meanwhile, the Purdue report indicated that, “Corn prices are expected to be at their highest level in three years.

The potential strength in prices is being led by record usage and declining inventories. 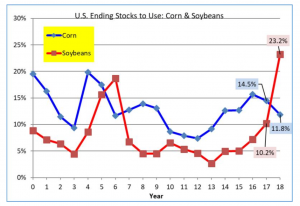 “Corn ending stocks are lower for both the 2017 crop and now the 2018 crop. The stocks-to-use ratio has dropped from 15.7% for the 2016 crop to 11.8% currently anticipated for this year. This is a meaningful tightening of inventory and provides bullish price opportunities if usage is stronger than currently anticipated, or if weather in South America or the U.S. turns adverse in 2019…Keep an eye on new crop pricing opportunities with the potential for December 2019 futures to reach $4.25,” the report said.

In a farmdoc update earlier this month (“Grain Farm Income Outlook for 2019: Negative Incomes Ahead?“), Gary Schnitkey stated that, “In 2018, many grain farms in Illinois will have incomes above $70,000 per farm, the average from 2013 to 2017. Incomes in 2019 could be negative on many farms. While scenarios exist that result in near average incomes, it seems best to plan for negative incomes on grain farms in 2019. Income from 2018 should be saved to cover potential losses in 2019.” 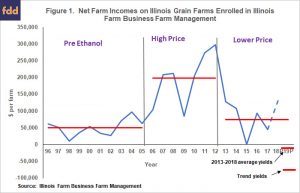 The farmdoc update explained that, “Expectations are for much lower incomes in 2019 because of two factors:

Dr. Schnitkey added that, “At this point, it seems likely that net farm incomes will be very low in 2019. Negative average incomes across Illinois grain farms are possible in 2019. As often happens in agriculture, conditions can change, resulting in a brighter outlook. Still, it seems prudent to plan for low and negative incomes on grain farms in 2019. Saving 2018 income and building working capital seems like a good strategy for combating potentially low income in 2019.”

The report included a “Corn Following Soybeans” budget, as well as a “Herbicide Tolerant Soybeans Following Corn” budget (see below). 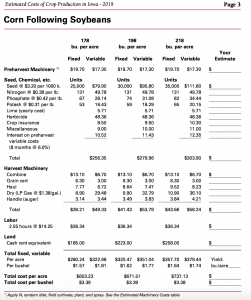 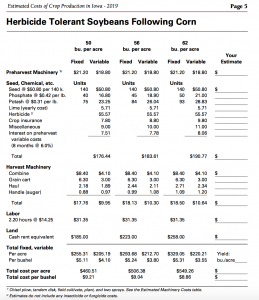 The ISU update reminded readers that, “These cost estimates are representative of average costs for farms in Iowa. Very large or small farms may have lower or higher fixed costs per acre.

“Due to differences in soil potentials, quantity of inputs used, and other factors, production costs will vary from farm to farm.”