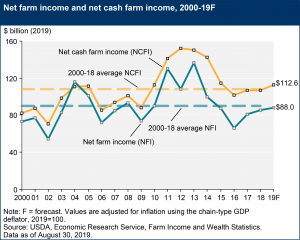 USDA Deputy Chief Economist Warren Preston explained in the radio interview that, “In March of this year, we had estimated net farm income for the United States at $63.1 billion.  With [Friday’s] release, we are now estimating 2018 net farm income at $84.0 billion.”

Dr. Preston noted that, “Primarily, there were reductions in feed, net rent, agricultural labor and the capital depreciation that reduced those production expenses for 2018.” 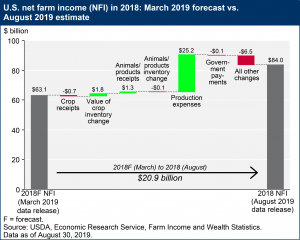 Bloomberg writers Mike Dorning and Dominic Carey reported late last week that, “The U.S. Department of Agriculture on Friday projected net farm income this year will reach $88 billion, up from [a revised estimate of] $84 billion last year. That’s a rosier financial picture for farmers than prior estimates, which didn’t anticipate the level of aid Trump would provide to compensate for lost sales to China, said Jeffrey Hopkins, the economist who supervised the forecast.” 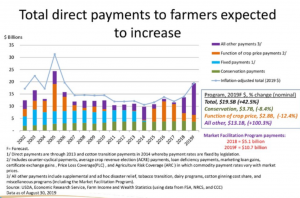 “The last forecast, made in March, also didn’t include the level of aid payments farmers received for being unable to plant because of floods, Hopkins said.”

The Bloomberg article pointed out that, “Rob Larew, vice president of public policy for the National Farmers Union, the second-largest general farm organization, said the boost in profits ‘belies the economic difficulties that most farmers are still facing’ and relies entirely on aid from taxpayers.

‘Though those payments are helpful in the short term, they ultimately are not a sustainable solution to the ongoing farm crisis,’ Larew said. ‘Unless the government plans to either keep throwing money at these problems or implement real solutions, farm income will likely fall again next year.’ 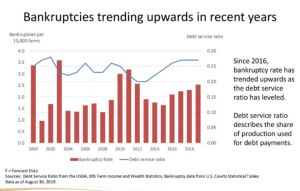 Friday’s Bloomberg article stated that, “Farmers will receive $19.5 billion in direct government aid by year-end, the most since 2005, according to the projections. That doesn’t include an additional $10.5 billion in federally subsidized crop insurance payments forecast for the year.” 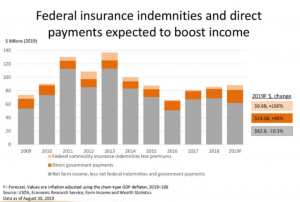 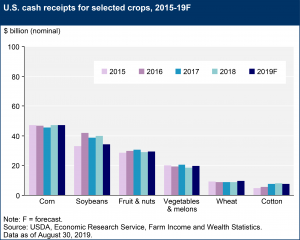 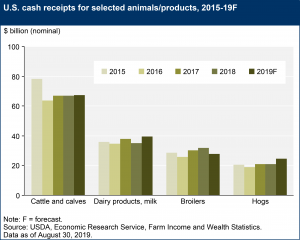 While discussing commodity program payments, ERS noted that, “Payments in 2019 under the Price Loss Coverage (PLC) program are expected to increase modestly due to higher payments for feed grains and rice, and the addition of seed cotton to the program, as authorized by the Bipartisan Budget Act of 2018. Agriculture Risk Coverage (ARC) payments are expected to decline because of a large drop in payments for wheat. Payments are also expected to increase for the marketing loan gains and the loan deficiency programs.”

Also, “Conservation payments—reflecting the financial assistance programs of USDA’s Farm Service Agency and Natural Resources Conservation Service—are expected to fall to $3.7 billion in 2019, down 8.4 percent from 2018.” 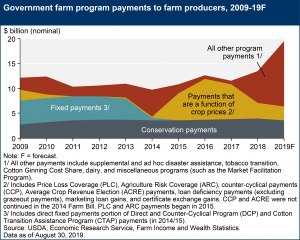 In a look at production costs, Friday’s update pointed out that, “Farm sector production expenses (including expenses associated with operator dwellings) are forecast to increase less than 1 percent in 2019, which is under the rate of inflation. Forecast at $346.1 billion, 2019 production expenses are still below the record high of $391.1 billion in 2014. While the overall farm sector expense forecast is little changed from 2018, fluctuations to individual expense items are expected to occur.” 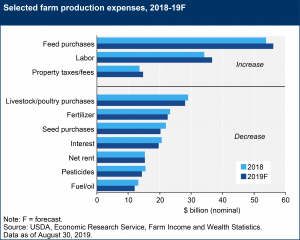 Friday’s update also provided a perspective on farm household income, and stated that,

Farm households typically receive income from both farm and off-farm sources. Median farm income earned by farm households is estimated at -$1,840 in 2018 (nominal terms) and is forecast to increase slightly to -$1,644 in 2019.

“In recent years, slightly more than half of farm households have had negative farm income. 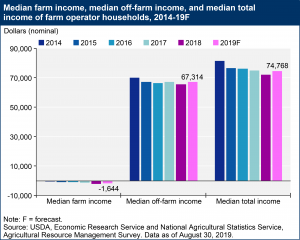