Recent news articles and government reports show that African Swine Fever (ASF) continues to have a disrupting impact on soybean and pork markets.  Today’s update highlights key points from several of these sources.

Laura Reiley reported earlier this month in The Washington Post that, “African swine fever is decimating the world’s largest hog herd in China, and that holds risk and opportunity for U.S. pork producers.

“Affected animals have now been reported in every province in China, and the disease has spread to neighboring Mongolia, Vietnam and Cambodia.”

The Post article stated that, “At least 129 outbreaks have been reported since African swine fever was first identified in August, according to China’s National Bureau of Statistics. It estimates that 1 million exposed animals have been exterminated and that the interruption in production has reduced the country’s overall hog population by 40 million.”

‘It’s so much more than 1 million pigs, but no one knows for sure,’ said Dermot Hayes, an economist at Iowa State University who runs a small center that studies Chinese agriculture. China penalizes the ‘provinces that report the disease, so reporting is not a good measurement.’

Ms. Reiley pointed out that, “In March, the USDA announced enhanced biosecurity measures to prevent the disease from spreading to the United States. The agency also expanded its Beagle Brigade, which patrols U.S. ports of entry, to 179 teams across key air and sea ports, where the dogs and their handlers screen new arrivals and check for illegal pork and pork products.”

Also in March, USDA indicated in a news release that, “USDA-trained detector dogs played a major role in the seizure of smuggled pork from China where there is an outbreak of African swine fever (ASF). The highly contagious and deadly disease affects both domestic and feral (wild) pigs and there is no treatment or vaccine available for it.”

The release noted that, “Since prevention is our best protection against the disease, U.S. Secretary of Agriculture Sonny Perdue is sharing information about the importance of keeping ASF out of the United States.”

And a news release last week from USDA, which outlined additional ASF related actions by the Department, stated that: “USDA is furthering its overall [ASF] preparedness efforts with the implementation of a surveillance plan. As part of this plan, the Animal and Plant Health Inspection Service (APHIS) will work with the swine industry, the states, and veterinary diagnostic laboratories to test for ASF.” 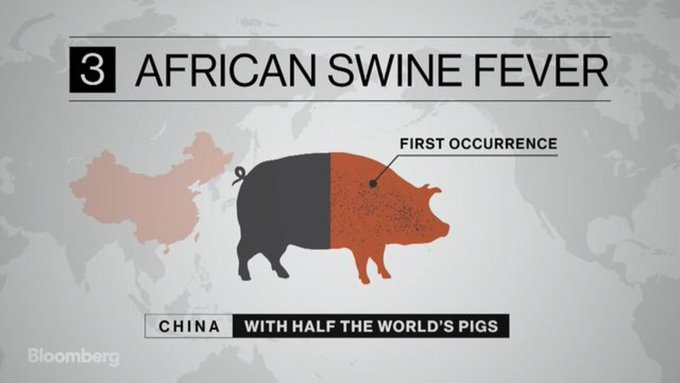 Financial Times writer Gregory Meyer reported earlier this month that, “The head of meatpacking company Tyson Foods has warned the ‘threat is real’ that African swine fever could enter the US for the first time, a nightmare scenario for pork exporters.”

The FT article noted that, “However, [Noel White, Tyson’s chief executive] spoke in grave terms about the risk that the disease could spread to the 74.3m pigs on US farms, which would immediately shut off American pork exports.

“‘I think the threat is real. I do think there is a distinct possibility it could come to the United States,’ Mr White said.”

Emiko Terazono reported last week at The Financial Times Online that, “US farmers, already feeling the impact of man-made problems in the form of political tensions with China, are about to face a natural challenge, with the effects of the African swine fever that is decimating China’s pig herds.”

“The impact for US farmers is likely to be significant,” the FT article said.

In its biannual report on global food markets, the Food and Agriculture Organization of the United Nations (FAO) noted this month that, “With the sharp decline in pig inventories, the exponentially rising import trend, especially of soybeans, over the past two decades could come to an abrupt halt. Indeed, the first signs of a slowdown in soybean imports were already evident in 2018.” 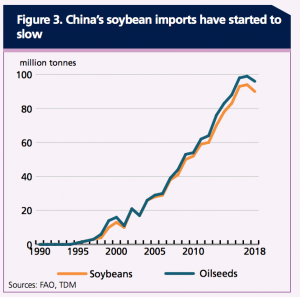 “Initial estimates for 2019 suggest that this trend would continue.” 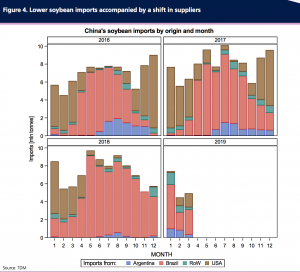 Meanwhile, a report earlier this month from USDA’s Foreign Agricultural Service (FAS)  (“China- Falling Hog Numbers Pressure Import Demand for Oilseeds“) stated that, “China’s soybean imports are estimated to fall to 84 million metric tons (MMT) in marketing year (MY) 18/19 and 83 MMT in MY19/20, compared to 94.1 MMT in MY17/18.” 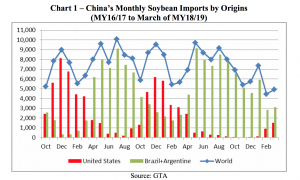 “The sizable decrease in MY18/19 and MY19/20 soybean imports is due to reduced feed demand as a result of [ASF] in China beginning in August 2018. The disease has caused a significant decline in sow and hog inventories, thereby reducing demand for soybean meal for feed. This situation is expected to continue through 2019 and into 2020,” FAS said. 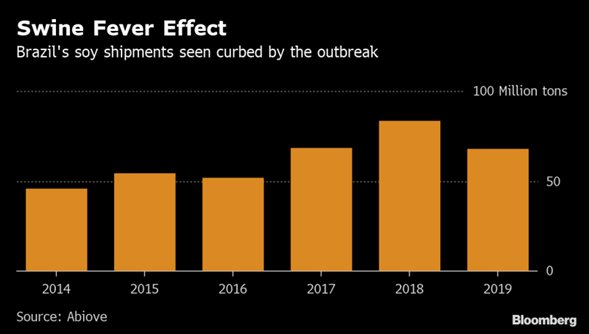 In a separate update this month (“Oilseeds: World Markets and Trade“), FAS explained that,

African Swine Fever (ASF) in China will be a game changer for the global oilseed complex, and soybeans in particular, in the coming years.

FAS added that, “With declines in China’s imports and crush for 2018/19 and little recovery in demand expected in the coming year, there will be limited opportunity for U.S. producers to see any appreciable draw-down in soybean stocks. And with a recovery in Argentina’s soybean output, Chinese buyers will have additional supplies to access outside of the United States compared to last year. 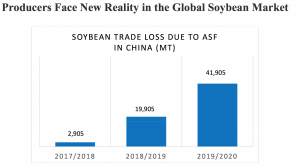 “Consequently, large global supplies and lower demand in China will continue to pressure soybean prices; a situation that will likely continue as the industry adjusts to ASF. This is a far cry from the market dynamics producers experienced since the mid-2000’s and will require adjustments by producers to remain profitable in a lower priced market.”

With respect to ASF impacts on pork, USDA’s Economic Research Service (ERS) stated in this month’s Livestock, Dairy, and Poultry Outlook that, “Going forward, the ASF-related impacts on the Chinese hog inventory are expected to lead to significant increases in demand for imported pork. A probable scenario is for Chinese excess demand for imported pork to progressively drive world pork trade dynamics. High Chinese pork prices can be expected to draw large volumes of imports from pork-exporting countries. For the United States, this could mean that significant shares of increased U.S. pork exports may back-fill pork diverted to China by other pork-exporting countries. The bar graph below shows year-over-year percent changes in quarterly U.S. pork export trade forecasts.

“The forecasts show progressive, aggregate effects of China’s growing pork deficit on U.S pork exports. However, to the extent that increased demand is reflected in higher prices, U.S. pork may find itself under competitive pressure in a number of price- sensitive markets.”

Meanwhile, while addressing pork market dynamics, the FAO’s biannual report on global food markets stated that, “The unfortunate prospect facing Asian producers could bring opportunities for producers elsewhere, particularly those in Europe, the United States of America and Brazil.

It is a rare combination of events that presents pig producers with higher prices, higher export volumes and lower feed prices.

“But the data available for the spread of ASF so far would indicate that in Europe and the Americas pig producers may be about to enjoy precisely this situation.” 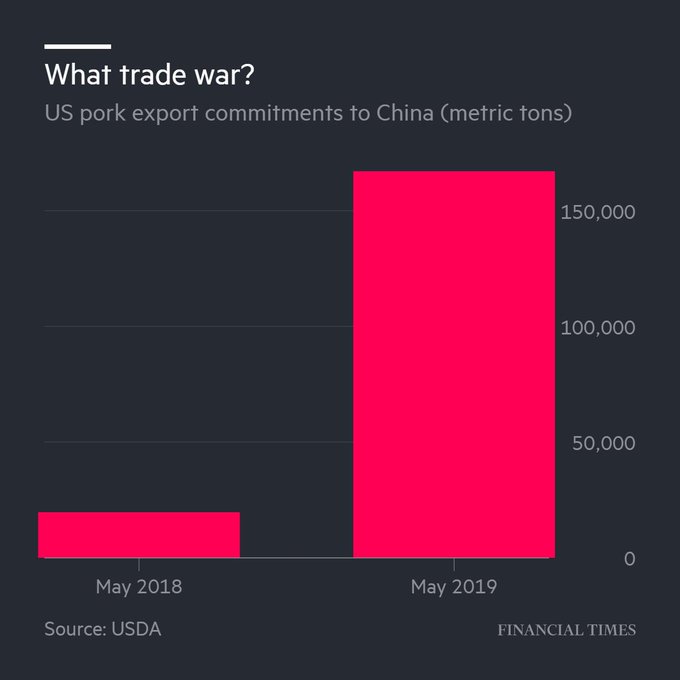 The US-China trade fight might be getting worse, but US data this morning show China has bought 8x more US pork than a year ago. Despite a 62% tariff. African swine fever is having an impact (background here: https://www.ft.com/content/041fd63a-6143-11e9-a27a-fdd51850994c … via @financialtimes)

Bloomberg writers Isis Almeida and Ashley Robinson reported on Friday that, “Canadian pork exports to China soared 80% in March as the spread of African swine fever forces the Asian nation to tap overseas markets, government data show. With Chinese tariffs on American pork still in place, Canada is importing more from the U.S. and shipping its own produce to China. All of that is curbing supply to Mexico.”

“Canada shipped 33,456 metric tons of pork to China in March, compared with 18,628 tons a year earlier, data from Statistics Canada show. At the same time, it increased imports from the U.S. by 41%,” the Bloomberg writers said.

And Heather Haddon and Jacob Bunge reported on Sunday at The Wall Street Journal Online that, “A disease sweeping China’s hog farms is set to hit U.S. meat eaters’ pocketbooks.

“The companies that sell Big Mac and Whopper burgers, Jimmy Dean sausages and Dunkin’ bacon sandwiches all expect meat prices to rise this year, as China imports more pork, beef and poultry to fill a shortfall in its huge hog market.” 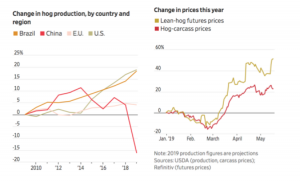 “Meat Prices are Set to Climb as Swine Fever Claims China’s Hogs,” by Heather Haddon and Jacob Bunge. The Wall Street Journal (May 19, 2019).

The Journal writers pointed out that, “Hog futures have risen 52% this year. Wholesale meat prices are beginning to follow. Hog-carcass prices are up 23% in 2019, according to USDA data, and prices for pork trim, used in sausage, have nearly doubled.”