A Wall Street Journal article Wednesday stated that, “Hog prices have surged in recent weeks on signs that Chinese buyers have turned to the U.S. to make up for the dwindling of China’s pig herds because of African swine fever.” Today’s update explores this development in greater detail.

A report earlier this month (China- Livestock and Products Semi-annual) from USDA’s Foreign Agricultural Service (FAS) stated that, “African Swine Fever outbreaks continue in China, affecting all aspects of the swine and pork industry. China has reported 115 ASF outbreaks to the World Organization for Animal Health (OIE), covering all commercially significant swine producing regions.  While it is still unclear if ASF outbreaks will continue to be reported with the same frequency and geographic distribution, the disease has already taken a toll on China’s swine and pork production for 2019.

By the end of 2019, the total swine inventory will be down 13 percent to 374 million head. Pork production will decrease by 5 percent to 51.4 million metric tons (MT), with the reduced supply only slightly offset by weakened demand.

With respect to how ASF is impacting Chinese pork imports, the report explained that, “In 2019, China’s imports of pork are forecast at 2 million MT, representing a 33-percent year-on- year increase. This jump in imports is directly due to the temporary decrease in domestic pork production. While the actual amount of pork imported in 2019 depends on a number of factors, two key drivers will be the ASF situation in Europe and U.S.-China trade relations.”

The FAS update noted that, “Chinese imports of U.S. pork were down by nearly half in 2018 as China’s government levied retaliatory tariffs on most U.S. agricultural products, including pork. With an additional two tariffs, most U.S. pork now faces a 62-percent tariff, versus the MFN rate of 12 percent. While the United States is well-positioned to supply the Chinese market, the additional tariffs will continue to constrain opportunities.

“In 2018, Brazil surpassed Germany, Spain, and Canada to become the largest exporter of pork to China. From 2017 to 2018, Brazilian pork exports to China jumped over 200 percent.”

Also this month, USDA’s Economic Research Service pointed out in its Livestock, Dairy, and Poultry Outlook that, “Major foreign destination for U.S. pork exports in 2018 are summarized [in the table] below. It is notable that Mexico, Japan, Canada, and China/Hong Kong all accounted for a smaller share of U.S. pork exports in 2018 compared with a year earlier, while the reverse was true for South Korea, Colombia, Australia, the Dominican Republic, the Philippines, and Honduras. 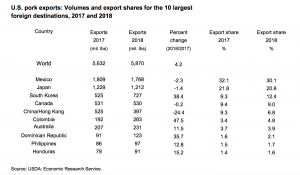 Wall Street Journal writer Kirk Maltais reported on Wednesday that, “U.S. hog futures prices have rocketed nearly 50% higher in the past month, as expectations rose that China would use American imports to cover shortfalls in its pork supplies.

“April prices of U.S. lean hog futures on the Chicago Mercantile Exchange have risen 43% since the beginning of March, on track for the best monthly performance on record in data going back to 1973, according to Dow Jones Market Data.” 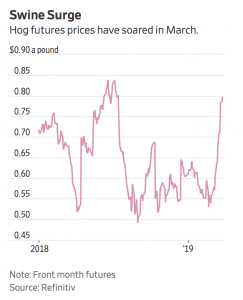 “Hog futures are one of the best-performing markets this year—just behind gasoline and U.S. crude—across commodities, stocks and currencies. The broader S&P GSCI commodity index has climbed 16% in that period,” the article said. 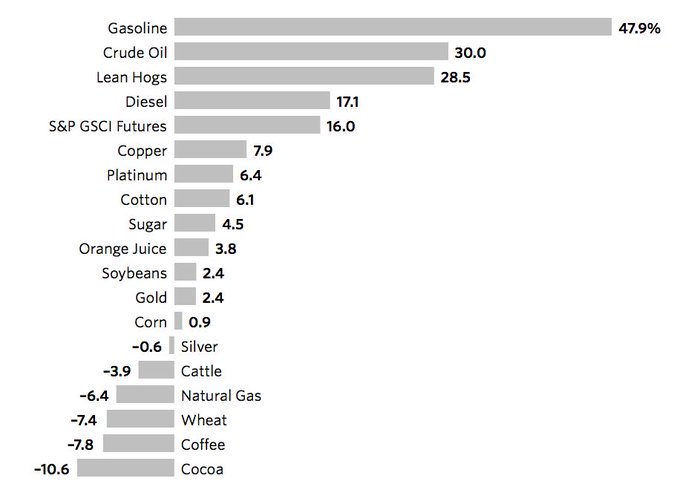 Hog prices have surged in recent weeks on signs that Chinese buyers have turned to the U.S. to make up for the dwindling of China’s pig herds because of African swine fever. Outbreaks of the disease, which is deadly to pigs but not harmful to humans—started last year.

In addition, the Journal article noted that, “The livestock futures market was abuzz this week about even bigger U.S. purchases in the coming weeks. According to a Bloomberg report, Chinese officials are considering buying up to 300,000 metric tons of pork from the U.S. in 2019, two-thirds of which could be purchased in the first half of the year alone. That would be a stark reversal from last year, when Chinese pork imports from the U.S. plummeted 47% to 29,600 tons as trade tensions between the two countries intensified.

“Whether or not China makes such a substantial purchase, the rally this year already marks a shift from 2018, when hog prices hit lows as U.S. trade disputes with Mexico and China curbed pork demand, all while U.S. producers ramped up their herds, expecting strong demand.”

In a separate Wall Street Journal article Wednesday, Kirk Maltais and Jacob Bunge reported that, “A deadly virus that has decimated Chinese hog herds has prompted buyers in the world’s largest pork market to purchase more of the meat from U.S. producers for the first time in a year. 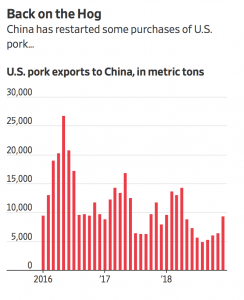 “Now U.S. officials are enlisting sniffer dogs and other heightened monitoring efforts to help protect that hog-market rally. They are inspecting shipments of live hogs, frozen meat and other goods into the U.S. for evidence of African swine fever, a contagious disease that is nearly 100% fatal in both domestic and wild pigs. It doesn’t affect humans but has wreaked havoc on China’s pork industry.”

Maltais and Bunge noted that, “The USDA said any detection of African swine fever here would hit that rally and the broader pork industry hard. The U.S. pork industry annually markets over 115 million pigs, providing a gross income of over $20 billion, according to the National Pork Producers Council. The industry accounts for over 500,000 jobs in the U.S.”

If this [African Swine Fever] gets in the United States, it’s going to put us out of business. Are we on the ball here?

Sec. Perdue stated that, “Well, I think we are. But there’s no doubt, in these kind of transmissible diseases and the mobility of society today, there’s no way to guarantee that Mr. Chairman. But I think APHIS, our Animal Plant Health Inspection Service, is on the job at borders. Working hand in glove with our customs and border patrol, using obviously dogs, rescue beagles, in order to sniff out incoming travelers from internationally, particularly in those areas that we fear.

“But the pest transmission, both of animal and plant, is a real concern always. We’re ever vigilant about that. We feel that we’ve got a good protocol in place. We’re working both with our primary threats, although there are no evidence of African swine fever in Canada or Mexico, you know that we both enjoy very long borders, and fairly porous borders with each. And that’s a concern. So we work with those countries.”

Sec. Perdue added that, “It’s the mobility of our swine population in the United States, as you well know from your area. Many of these pigs are born elsewhere and they’re transferred to be fed out in other parts of the country. And there are a lot of pigs on the road at any given time, which makes this very difficult. Unlike maybe a regionalization, or a concept in poultry, where you can more identify and encapsulate, the mobility of our pig population makes that more difficult. But I believe we’re doing everything we can.”