News items continue to highlight the ongoing impacts of African Swine Fever (ASF).  In addition to explaining some of the market effects of the disease, recent articles have also addressed under-reporting issues in China, the spread of ASF, and the importance of keeping ASF out of the United States.

Bloomberg News reported last week that, “Most Chinese hog farms are choosing not to replenish herds as a deadly swine virus continues to spread across the world’s top pork market.

“More than 80 percent of farms are deciding not to restock, according to China’s Agriculture Ministry. Outbreaks of African swine fever were confirmed on [April 21] on six farms in Hainan, the island province in the far south. The virus has spread across virtually the entire country since it was first reported in August, with more than a million hogs culled.”

The article explained that, “As well as leading to a surge in pork prices, the epidemic could also cut demand for soybeans, an animal feed ingredient, where China is the world’s largest importer.” 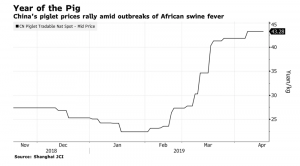 The article stated that, “China’s soybean imports in the year to September may fall to 85-86 million tons, said Chen Gang, vice chairman of the China Vegetable Oil Industry Association, below the U.S. Department of Agriculture’s 88 million ton forecast.”

More specifically on Chinese pork imports, the Bloomberg article noted that, “While increasing imports could narrow the shortfall, global trade volume may not be enough to fill China’s supply gap, according to Zhu Zengyong, a researcher with the Chinese Academy of Agricultural Sciences at the Agricultural Information Institute.

Should China’s domestic hog supplies drop by 10 percent, the country would need to import more than 2 million tons of pork, Zhu said at the Beijing conference. The global annual pork trade of about 9 million tons is only the equivalent of about two months of Chinese consumption, according to the USDA.

Also last week, Financial Times writers Gregory Meyer, Hudson Lockett and Andres Schipani reported that, “The ASF virus, endemic to Africa, is fatal to pigs and has no cure. The current wave of cases began in Georgia in 2007 and spread to parts of eastern Europe and Russia before reaching China in August.” 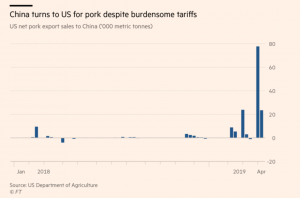 The FT writers pointed out that, “Expectations of Chinese buying have also fed a big rally in Chicago livestock futures, which track transactions in the US. Hog contracts for June settlement were 96 cents a pound on the Chicago Mercantile Exchange last week, up more than a quarter from March 1, when China began stepping up purchases of US pork that now total more than 127,000 tonnes.”

On Wednesday, Bloomberg writers Alfred Cang and Anna Kitanaka reported that, “In almost 40 years of analyzing commodity markets, Arlan Suderman says he has never witnessed an industry-jolting event as dramatic as the contagion spreading across China’s hog farms.

“The chief commodities economist at INTL FCStone Inc., the New York-based brokerage, has been warning clients about the impact of African swine fever, which he says is not only under-reported but will spur a restructure of China’s entire farm industry and trigger an escalation in meat prices globally. Most react in disbelief, Suderman said, but the situation is likely to worsen before it gets better.” 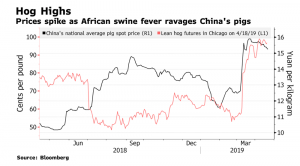 Cang and Kitanaka added that, “Suderman estimates that China’s nationwide pig feeding has dropped by more than 40 percent, or about 300 million hogs in terms of annual production.”

“The picture changed late last year, when Mr. Prestage began fielding calls from Chinese buyers asking when his plant might be able to start exporting pork. He said he met with Chinese officials last week. The recent surge in pork prices—carcass prices have climbed 40% in the last 2 months—means his family’s plant now is likely to turn a profit in 2020, he said.

‘”It’s going to help us get a leg up quicker than we expected,’ Mr. Prestage said.” 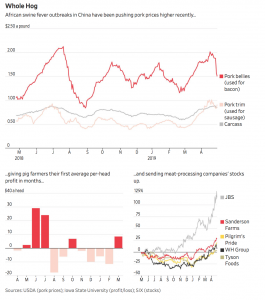 The Journal article added that, “Combined, China and Hong Kong bought 495,637 metric tons of U.S. pork in 2017, before tariffs that took effect last year sapped that flow to 351,774 tons in 2018, according to data compiled by the U.S. Meat Export Federation. Now, China’s purchases in the past two weeks alone have totaled 101,200 metric tons, U.S. Department of Agriculture data show, even as the tariffs remain in effect.”

Nonetheless, the Journal writers pointed out that, “For Pam Janssen, whose family sells some 6,000 hogs annually from their farm near Minonk, Ill., the higher prices haven’t made up for losses last year when tariffs pushed down prices.

With respect to other market impacts of ASF, a recent update from USDA’s Foreign Agricultural Service (“China- Grain and Feed Annual“) stated that, “The emergence of African Swine Fever will prompt further consolidation of China’s hog sector to meet heightened government biosecurity requirements. This will require the overall feed sector to consolidate and integrate vertically, by investing in larger-scale grain handling, storage, and milling infrastructure in China’s North East Corn Belt. In South China, feed mills will shift from manufacturing hog feed formulations for small hog production operations to producing aquaculture and poultry feed. This will increase the efficiency of feed use in the hog sector.”

ASF- Chinese Response, Spread, and High Alert in the U.S.

New York Times writers Raymond Zhong and Ailin Tang reported last week that, “The need to get a grip on African swine fever could not be more urgent for China, the world’s largest producer and consumer of pork. Yet the official response seems to fit a pattern from previous crises involving public health and safety in the country, including an AIDS epidemic in the 1990s, an outbreak of severe acute respiratory syndrome in the early 2000s and a widespread tainting of baby formula in 2008.

“The authorities’ tendency to hush up such problems engenders public distrust. Distrust makes the problems even harder to solve.”

The Times article added that, “China has introduced new hygiene requirements, imposed quarantines and restricted the transporting of swine. But such measures will be of limited use if the authorities have an incomplete picture of the problem — or if they have more a complete picture that they do not make public.”

Lucy Craymer and Zhou Wei reported in Friday’s Wall Street Journal that, “‘The disease is spreading more quickly than we expected,’ said Wantanee Kalpravidh, who works in Asia for the Food and Agriculture Organization, a United Nations agency.

Experts see the situation worsening further before it gets better.

The Journal writers noted that, “In recent months, customs officials in Japan, Taiwan and Australia have found infected meat in other food products carried by tourists. And the disease has since been confirmed in herds in Vietnam, Mongolia and Cambodia.

“Matthew Stone, a deputy director general at the World Organization for Animal Health in Paris, said those findings were alarming, and showed there were risks that the disease could become more widespread through the region.” 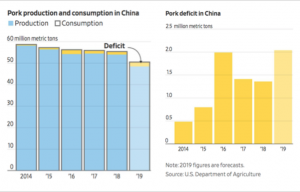 PODCAST: African swine fever is wreaking havoc on global hog futures but offers a boon to U.S. producers — as long as they can keep the virus at bay. @mhirtz and @daniellebochove discuss https://soundcloud.com/user-730712918/this-week-in-commodities-african-swine-fever …

The Bloomberg writers indicated that, “The risk of spread into the U.S. has now more than doubled, most likely by passengers bringing pork in luggage to airports in California, New York or Texas, according to the Swine Health Information Center.

The first year of a U.S. outbreak would mean revenue losses of $8 billion for pork producers, $4 billion for the corn industry and $1.5 billion for soybeans, according to a study led by Dermot Hayes, an Iowa State University economics professor. Corn and soybean meal are principal feeds for hogs.

Last week’s article noted that, “At U.S. airports, sniffer beagles are deployed to snort out banned pork products and other contraband. Meanwhile, the Department of Agriculture has a 28-page response plan that calls for quarantining any herds upon ‘strong suspicion’ of the disease on the premises and eradicating herds if a case is confirmed, said Joelle Hayden, a spokeswoman for the agency’s U.S. Animal and Plant Health Inspection Service.

“Last month, federal agents seized 1 million pounds (454 metric tons) of pork smuggled from China to a port in New Jersey — it was the largest-ever U.S. seizure of agricultural products.”