Washington Post writers Andrew Van Dam, Laris Karklis and Tim Meko reported on Tuesday that, “Corn Belt farmers are used to being at the mercy of the weather.

“But they are not used to the weather being quite this merciless.

“Through all of April and all of May, wave after wave of rain hit the nation right in the breadbasket, with April capping the wettest 12 months on record for the continental United States. The past 60 days, in particular, have coincided with planting season in much of the country.” 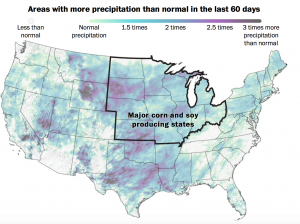 “After a biblical spring, this is the week that could break the Corn Belt,” by Andrew Van Dam, Laris Karklis and Tim Meko. The Washington Post (June 4, 2019).

Recent measurements show most of Illinois’s famous topsoils are more waterlogged than they have ever been, University of Illinois economist Scott Irwin said. 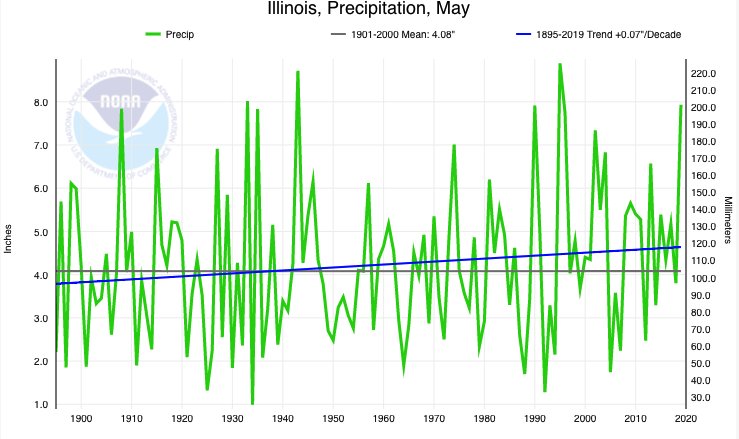 The Post writers explained that, “As the calendar ticks toward the point of no return, new data released Monday shows farmers have planted 67 percent of the acres they had planned to put in corn. In key states such as Illinois (45 percent) and Indiana (31 percent), it is even lower.” 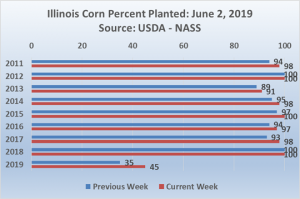 “Planting in June is so absurd that Midwest universities typically do not even test dates that late when determining optimal growing seasons, Irwin said.”

And, Wall Street Journal writer Lauren Silva Laughlin reported on Wednesday that, “A wet planting season has delayed farmers from getting their corn crop in the ground. Many are now trying to decide whether to forgo their main livelihood, growing and selling crops, to instead collect insurance payouts for leaving fields fallow. The variables are complex and the stakes shift daily.” 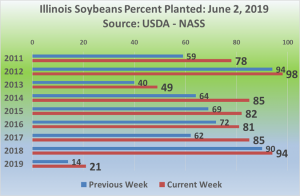 The Journal article explained that, “Farmers often buy insurance policies before the planting season starts that reimburses them if the results are subpar. Many policies promise 85% of what could be a farmers’ typical revenue, assuming they plant their crop but it doesn’t grow as well. There is a catch, though. Farmers have to plant by a certain date—June 5 in many Midwestern states—or their payouts tick down daily.

In extreme scenarios, farmers may choose not to plant at all. That is the decision many are facing now. They receive less from insurers than if they do plant, but they may choose this option if, for example, they haven’t yet incurred any costs of fertilizer or other products.

Jacob Bunge and Kirk Maltais reported on Wednesday at The Wall Street Journal Online that, “While some farmers may gamble on a late-planted crop that could yield a fraction of a typical harvest, many will turn to crop insurance that pays out when farmers are unable to plant by a preset deadline. Farmers also are weighing the promise of another multibillion-dollar trade rescue package from the USDA, and potential funding from federal disaster recovery legislation. The Trump administration last year directed $12 billion in federal aid toward the U.S. farm sector in response to tariffs on U.S. crops, meat and dairy products.”

Note that with respect to the executive branch trade mitigation program, an update Wednesday from USDA Radio pointed out that Secretary of Agriculture Sonny Perdue said the details of the program are just days away.  As announced, the market facilitation program (MFP) payments are based on reported plantings, meaning farmers will not receive payments if they do not plant.

A news article Wednesday confirmed this, and reported that unplanted acres will not be a eligible for the trade mitigation payments due to legal issues.  (This was an issue that House Ag Committee Chairman Collin Peterson alluded to in an interview with Mike Adams on Friday.  On Monday, Sec. Perdue also addressed this topic, and noted that, “we are looking at it from a legal perspective.”).

Nonetheless, Congress appears to be looking to the recently passed disaster aid bill as a “backdoor” vehicle for MFP payments on prevented planted acres (See tweets below).

3. Straight from the horse’s mouth: “Hoeven told Agri-Pulse in an interview on Wednesday that a provision was inserted into the bill to provide disaster relief payments for prevented plantings in lieu of the MFP assistance. “

4. More: “We can’t help on prevented plant acres under the trade assistance (package), which is why it’s in disaster supplemental bill,” said Hoeven, R-N.D.

DTN Ag Policy Editor Chris Clayton reported on Wednesday that, “We’re in a land of confusion just off a highway paved with good intentions.

“That more or less sums up what is going on with the prevented-planting language in the new agricultural disaster legislation approved by Congress at a time when spring planting season could be looking at record-breaking unplanted acreage.”

The DTN article stated that, “‘Folks are calling us from Ohio to Iowa to the Dakotas all through that whole delayed planting area and they are confused,’ said John Newton, an economist with the American Farm Bureau Federation. ‘When we started working on this, there was no idea there would be this kind of historic delays in planting. Now the package has been modified to cover that, there’s a lot of confusion.’

“Newton had some analysis on the disaster provisions as well.”

Mr. Clayton explained: “That specific language on ‘crops prevented from planting’ was not in the original disaster bill, but was added this spring as congressional appropriators worked on crafting the language and senators amended the bill several times. The bill also specifies raises in coverage levels for crop insurance protections from the past disaster bill to 90% for those who bought insurance policies and 70% for those who had non-insured crops. (Those percentages were raised from 85% and 65% in the earlier bill.”

“This time around, there were competing disaster bills in the House and Senate with various lawmakers adding language as new disasters mounted, such as the Midwest floods.

As one congressional insider told me, a Midwest senator added the language on ‘crops prevented from planting in 2019’ and changed the percentage of insurance loss protection levels that could be covered.

Mr. Clayton added that, “A significant percentage of prevented-planting acres will likely come out of counties and states that are not under any federal disaster declaration. Again, the difference between then and now is the sheer volume of potential unplanted acres that could be covered — and how that changes the equation.

USDA will have to figure out how to divvy up $3 billion in disaster funds that includes Hurricanes Michael and Florence, as well as crops from California wildfires and the Midwest flooding. The math just doesn’t add up for a prevent-planting windfall for everybody everywhere.

Meanwhile, Bloomberg writer Brian K Sullivan reported on Wednesday that, “Across the corn belt, there will only be sporadic days of dry weather in the next two weeks to help farmers catch up, said Dan Hicks, meteorologist at Freese-Notis Weather in Des Moines, Iowa. Fields east of the Mississippi River are hardest hit.

“‘For parts of Illinois, Wisconsin, Indiana, Michigan and Ohio, it is possible that they may never get all the corn planted,’’ Hicks said by telephone. ‘There are no clear signs for a week of dry weather to allow a rapid finish in most areas.’”

Cash corn prices need to be above $4.50 early in the late period before planting corn has higher expected returns than prevent plant (#plant19).

A farmdoc daily article this week provided an in-depth look at variables farmers will need to consider as they make decisions about late planting.

In part, the update stated that, “June 5 is the final planting date for corn in most of Illinois, Indiana, and Ohio. After that date, farmers can decide to plant corn or take a prevented planting payment for fields or partial fields they intended to plant to corn.  The date of planting will impact expected returns from corn planting…In general, cash prices must increase from current levels before planting corn results in the highest return in most situations analyzed.  If all costs of production need to be incurred, cash corn prices need to exceed $4.50 on June 6 if the RP has an 85% coverage level.  This break-even price goes over $5.00 per bushel by the second week of the late planting period.”

12. In my view, the additional risk factors tilt the decision toward PP even more than indicated in the #FDD article. How much more is hard to say. Emerson Nafziger has a #FDD article coming out today that discusses the agronomic issues. Won’t want to miss that one either.

13. So, the bottom-line for me is that it only makes economic sense for a minority of farmers in the Corn Belt to continue planting corn after today, June 5th.

The update added that, “The over 2 bushel per acre daily decline in corn yield in June and the decline in crop insurance guarantee during the late planting period mean that the returns from planting corn decline rapidly after June 5.”
Source: Keith Good, Farm Policy News