The Purdue University/CME Group Ag Economy Barometer declined moderately in December to 127, which was 7 points below the index’s value one month earlier and 9 points below October’s reading. The December 2018 barometer was virtually unchanged from December 2017 when the barometer stood at 126. This month’s decline in the Ag Economy Barometer occurred because producers’ perceptions of current conditions and their expectations for the future both drifted lower this month compared to November. The Index of Current Conditions declined six points this month to 109 and the Index of Future Expectations fell to 135 compared to 143 in November. It should be noted that this month’s survey was completed before President Trump signed the Agricultural Improvement Act of 2018 (2018 Farm Bill) into law so it remains to be seen what impact, if any, passage of that legislation has on U.S. farmer sentiment. 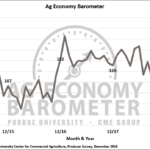 Compared to a year earlier, an interesting shift in producer perceptions has taken place regarding both current conditions and future expectations. The December 2018 Index of Current Conditionswas substantially below a year earlier, registering a year-to-year decline of 30 points. In contrast, the Index of Future Expectations was actually 15 points higher in December 2018 than in December 2017. This divergence in perceptions has been especially notable since last spring as producers continue to exhibit more confidence in future conditions for their farms in the face of weakening perceptions regarding current economic conditions. 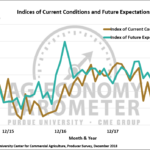 Producers interest in making large investments in their farm operations waned somewhat in December as the Large Farm Investment Index fell to a reading of 51, five points below a month earlier but still 9 points higher than in September, when it reached its lowest reading of the last three years. The investment index remains well below a year ago, when it reached a reading of 70, suggesting farmers are wary of making substantial farm investments given current financial conditions on their farms. 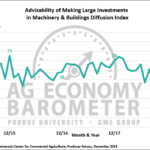 Concerns about agricultural trade continue to dominate headlines. To track farmers perceptions about future exports we have repeatedly asked farmers whether they expect U.S. agricultural exports to increase or decrease in the upcoming five years. Responses to this question became more positive from April through November 2018, but that changed on the December survey as the percentage of producers expecting exports to increase declined from 66 percent in November to 59 percent in December and the percentage expecting exports to decrease increased from 10 percent in November to 26 percent in December. 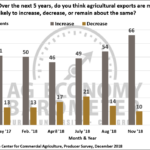 Figure 4. Agricultural producers’ expectations for agricultural exports over the next 5 years, May 2017-December 2018. 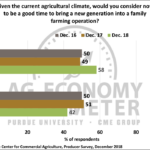 To learn more about on-farm technology usage, we queried farmers regarding their usage of drones on their farms. Thirty-four percent of survey respondents said a drone was used on their farm in the last year. On farms where a drone was used, nearly two-thirds (64 percent) of respondents said the drone was used by one of their farm’s service providers with just 36 percent of farms indicating a member of their own staff used the drone. Field scouting was the most common use for a drone (43 percent) followed by field mapping (17 percent), photography for promotional materials (17 percent) and hobby or other usage (17 percent). Only six percent of respondents reported using a drone to inspect farm structures. Just over half (56 percent) of farms that used a drone in 2018 said that drone usage provided added value to their farm operation, whereas 44 percent indicated that it did not add value. Looking ahead to 2019, just 6 percent of farms in our survey said they plan to purchase a drone in 2019. 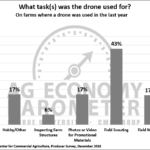 Ag producer sentiment weakened modestly in December compared to November 2018. December’s sentiment decline, compared to a month earlier, was attributable to producers’ perception that current economic conditions on their farms deteriorated, combined with reduced optimism about the future. When compared to a year earlier, however, producers’ perception of current conditions was markedly worse than in December 2017 as the Index of Current Conditions in December 2018 fell 30 points below the year ago level. In contrast, producers were actually more optimistic about the future in December 2018 than they were a year earlier as the Index of Future Expectations rose 15 points over the 12-month period. The weakening of farmer sentiment that took place from November to December appeared to impact farmers willingness to make large investments in their farming operations. The Large Farm Investment Index declined 5 points from November to December, which left it 9 points above the low established in September, but well below its year ago level.

Trade disputes with key ag trading partners, including Mexico, Canada and China, continue to be a concern among producers. Starting in mid-summer 2018 and prior to the December survey, producers showed signs of becoming more optimistic about future ag exports, but that changed on the December survey with the percentage of producers expecting U.S. ag exports to decline over the next five years increasing from just 10 percent in November to 26 percent in December.

Looking ahead to 2019, producers overwhelmingly expect contraction to take place in the nation’s dairy herd and also think a contraction of the U.S. beef herd in the upcoming year is more likely than when they were surveyed a year ago. Producers expect expansion to continue in the U.S. hog herd, which is consistent with estimates in USDA’s recently released December Hogs and Pigs report.