As Harvest Drags On, Producers Reminded to Cool Stored Grain 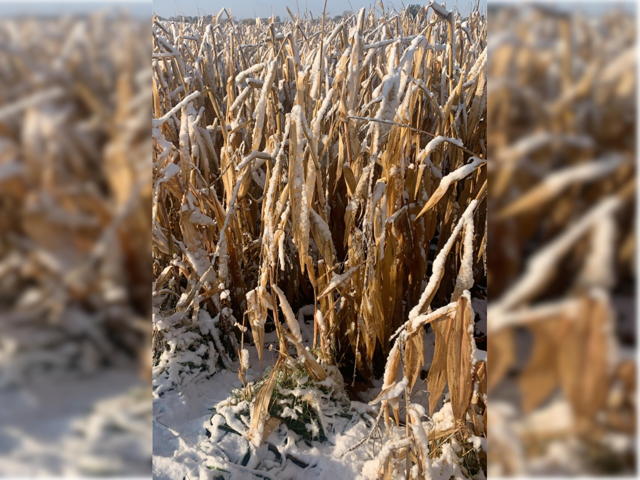 On Nov. 5, AgriSource consultant Keith Gehring told DTN this corn in Lee County, Iowa still had 20% to 23% moisture and had not dried down much in the past three weeks. The field was planted June 6. (Photo courtesy of Keith Gehring)

Many Midwest farmers faced a late-planting season with the added headache of poor summer growing weather, excessive rainfall and in some states early snowfall stalling harvest. However, things got worse at harvest, which has been moving almost at a snail’s pace. This presented a new headache for many, with probably the biggest issue being wet corn.

The USDA reported that as of Nov. 3, corn harvest reached 52% and still 10 days behind average. Minnesota, Iowa and Kansas did see some progress for that week, but North Dakota was only at 10% done, three weeks behind average and the least amount harvested for this date in 2009.

Many farmers have been storing this year’s harvest in their on-farm bins, likely after having to dry it down. But many university extension offices are reminding farmers not to ignore the corn after binning and to be sure to keep it cool. “A good rule of thumb is to cool grain any time the average air temperature is around 20 degrees Fahrenheit (F) cooler than the grain temperature. Repeat this cooling cycle until the grain temperature is 30 to 40 degrees F for winter storage. This storage temperature minimizes insect activity and mold growth in the stored grain. Cooling grain below 30 degrees F has little added benefit and can cause ice to form in the grain. Air humidity makes little difference when cooling grain,” Kristina TeBockhorst and Shawn Shouse of Iowa State University said in a Nov. 4 blog published by the University of Minnesota Extension.

The blog noted that the hours required for cooling the whole bin can be estimated as 15 divided by the cubic feet per minute of airflow per bushel of grain in the bin (cfm/bu). If you don’t know how much airflow per bushel your fan provides, you can estimate it using the calculator provided by the University of Minnesota at this link: https://bbefans.cfans.umn.edu/…

“The key at-harvest activities are cooling as fast as possible and drying as rapidly as drying systems will allow,” noted a Nov. 4 blog from the University of Minnesota Extension.

HAULING WET CORN CAN BE COSTLY

Many farmers don’t have the room to store their corn on farm and will need to haul it to their local elevator for drying, which will add costs to the farmer and lower their final price for their corn. See Iowa State Extension’s article “Corn Drying and Shrink Comparison” at https://www.extension.iastate.edu/…

However, some elevators have extended their wet corn allowance in order to get farmers to bring new crop bushels to them. The norm for the start of drying charges is that corn sold via contract is 15.1% and higher, but corn sold for storage is at 14.1% or higher. To give you an idea of the added cost to a farmer, here is a typical drying discount schedule, this one from Beardsley Farmers Elevator Company, Beardsley Minnesota: http://s3.amazonaws.com/…

Archer Daniels Midland Company waived grain drying charges below 19% at three of its processing locations to keep their plants running. In a statement provided to Brownfield News on Nov. 8, ADM said they are not charging farmers to dry corn unless it is above 19% moisture at their corn-wet mills in Cedar Rapids and Clinton, Iowa, and Decatur, Illinois.

However, wet corn will need to be handled differently by processors. When I was a corn buyer at an ethanol plant in Wisconsin, we only took wet corn to 17.5% moisture if we were desperate for corn to grind. We put wet corn in the “day” bin so the corn didn’t sit around for long and was used immediately. When the corn is above 16.5%, the hammer mills (they grind the incoming corn) can gum up and the plant manager is quick to make a call to the corn buyer noting the mess that was made. On top of that, wet corn can contaminate a bin if it makes it to the larger storage bin, so it needs to be used right away.

While some farmers will leave their corn in the field over the winter, especially if space is tight and the corn is wet, there are considerations that need to be weighed when doing so. North Dakota State University Extension Service grain drying expert Ken Hellevang noted to make sure corn stalks and cob shanks are strong if considering leaving high-moisture corn in the field over winter. “Field losses can range from minor to severe. Compare the cost of drying versus losses associated with leaving the corn in the field. In addition, standing corn tends to slow soil drying in the spring, which may delay planting.”

The biggest problem now facing Midwest farmers is a propane shortage related mostly to logistics issues, causing a lack of physical supply in some parts of the Midwest. Much of the shortages have been seen in Iowa and Minnesota, but a farmer from western Illinois said on social media Nov. 9 that his local co-op officially decided not to haul any more propane to grain dryers for the time being.

So, the headaches continue.