A proposal released on Friday by the Environmental Protection Agency and the U.S. Department of Agriculture aims to satisfy both farmers and energy companies by increasing use of ethanol, a fuel additive made from corn. Ethanol-blending exemptions granted to individual refiners will be offset by higher overall requirements to incorporate the fuel into gasoline, officials said.

“Corn futures on the Chicago Board of Trade dropped following the plan’s release, with the December corn contract slipping 1%. Traders said they were dissatisfied with the scant details in the EPA’s press release. Ethanol futures also declined, with the November contract down 2.2% at $1.39 a gallon.”

The Journal article explained that, “Ethanol production has been declining since August, after the EPA granted 31 waivers to small gasoline refineries allowing them to forgo mixing ethanol into their fuel as required. From the beginning of August into mid-September, U.S. daily ethanol production fell by roughly 100,000 barrels to 943,000 barrels, the lowest rate of production since April 2016. It has since rebounded to 958,000 barrels a day this week.” 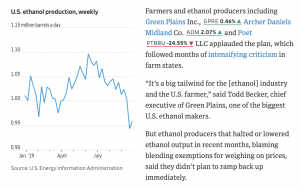 Reuters writers Humeyra Pamuk and Stephanie Kelly reported on Friday that, “While the move was largely welcome by biofuel groups, some industry players said they were concerned that the EPA declined to provide an exact figure for the 2020 blending quotas. A brief EPA call with reporters offered little insight, with an agency official saying only that the mandates will be based on a calculation of waived volumes over the previous three years.”

And, Bloomberg writers Jennifer A Dlouhy and Mario Parker reported on Friday that,

The EPA is set to formally propose changes next week. The agency said it would seek public comment on ensuring more than 15 billion gallons of conventional ethanol are blended into the nation’s fuel supply beginning in 2020 and that statutory obligations for biodiesel also are satisfied.

“The agency is set to effectively offset future exemptions by factoring a three-year rolling average of waived gallons into those annual quotas. In a forthcoming proposal, the EPA will propose a range of additional volumes informed by the last three compliance years and the underlying law, an EPA official said Friday.”

Gregory Meyer reported on Friday at The Financial Times Online that, “The Trump administration has changed course on US biofuels policy to placate angry farmers ahead of the 2020 election.”

“The exemptions for oil refiners had begun to damage the goodwill Mr Trump established in the Corn Belt last spring when he allowed unfettered sales of petrol containing 15 per cent ethanol, an increase from the customary limit of 10 per cent. Since he took office, the average number of exemptions has trebled.” 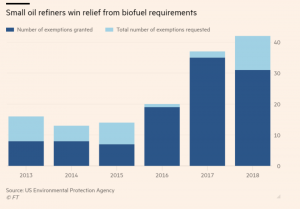 The FT article stated that, “Eighteen of the nation’s more than 200 ethanol plants have closed in the past year, according to the Renewable Fuels Association. US ethanol plant output has slumped to levels last reported in 2016…The slowdown has affected grain markets, with the US Department of Agriculture recently paring its estimate of ethanol sector corn use to 5.45bn bushels, which still amounts to 39 per cent of the projected 2019 harvest.” 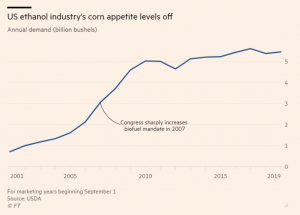 Donelle Eller reported on the front page of Friday’s Des Moines Register that, “The waivers have been a major blow to farmers at a time when they are already experiencing reduced demand for agricultural products because of trade wars with China, Mexico, Canada and other countries.”

“It also calls for greater transparency in the market for credits used by refiners to show compliance with the federal mandate.

“The action outlined in the plan will become a supplemental document to the 2020 biofuels requirement. It’s required to be filed by Nov. 30.”

The administration’s decision to increase the biofuel mandate is a body blow to the millions of refinery industry workers across the U.S. who were counting on the President to fulfill his promise to protect manufacturing jobs. #RFS #ethanol https://www.afpm.org/newsroom/news/api-and-afpm-joint-statement-administrations-changes-us-biofuel-mandate?utm_source=twitter&utm_medium=brand-social&utm_campaign=rfs-statement … 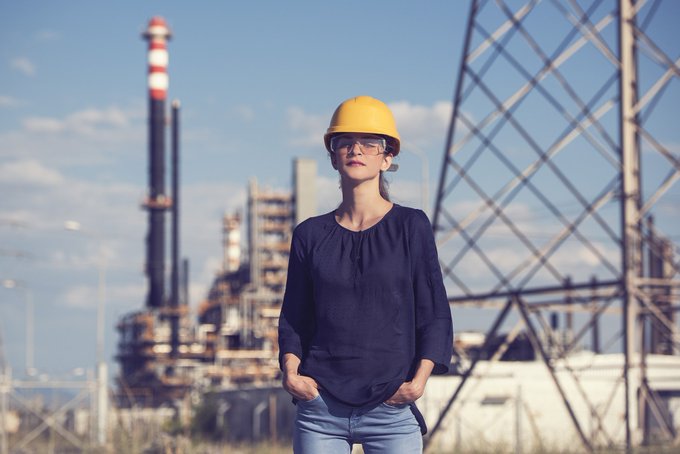 On Saturday, Joseph Morton reported on the front page of the Omaha World-Herald that, “Renewable-fuel groups, farm organizations and Midwestern politicians have embraced the Trump administration’s new ethanol proposal as a desperately needed production boost.”

“Still, many details remain to be fleshed out, and the country’s oil and gas interests pledged to fight it every step of the way,” the World-Herald article said.

1. Yes, this move by President Trump is a step forward in the #RFSwars from the perspective of ag and biofuels. But I think it can only be characterized as a partial victory at best. https://twitter.com/jendlouhyhc/status/1180125304456650752 …

It’s official: The Trump administration is taking action to boost U.S. demand for corn-based ethanol and soybean-based biodiesel, as the president seeks to temper criticism from farmers and Midwest politicians before next year’s election.https://bloom.bg/2LKjoQO  w @MarioDParker

Meanwhile, Donnelle Eller reported on the front page of Sunday’s Des Moines Register that, “On Friday, Siouxland’s board and 42 employees got some good news: The administration said it would take steps to begin restoring the market for billions of gallons of renewable fuel waived through small refinery exemptions.

While the announcement was widely welcomed, it lacked details, and it was unclear whether the president’s plan would be enough to immediately boost the market and help the nation’s ailing renewable fuel plants. 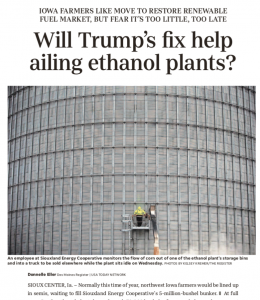 “But tucked into many of their responses was an acknowledgment that more work is needed to ensure the proposal becomes the final rule,” the Register article said.

This is great news for #Iowa and rural America. President @realDonaldTrump is following through on his commitment to our nation’s hardworking farmers and biofuels producers.

Great news for Illinois biofuel & ag producers! The announced plan to uphold the intent of the RFS & ensure lost gallons from SREs are accounted for will bolster the ag economy. I applaud @POTUS & his team for delivering on a promise to Midwest producers. https://lahood.house.gov/media-center/press-releases/rep-lahood-applauds-president-trumps-plan-boost-midwest-ethanol-and …

The #RFS has been widely successful, bipartisan, and benefits producers and consumers alike. The President’s RFS plan announced today restores credibility to the RFS and compliments his action to expand E-15. My statement here: https://bit.ly/2MhCrRm

Washington, D.C. – Congressman Adrian Smith (R-NE) released the following statement today after the Trump administration released the details of his plan to uphold the RFS.

.@realDonaldTrump & @SecretarySonny have delivered on their promise! Great news for our Kansas producers, and good for our environment, too. #ksleg #kssen https://twitter.com/business/status/1180128289026904065 …

The Trump administration pledges to boost demand for corn-based ethanol and soybean-based biodiesel to temper criticism from farmers and Midwest politicians https://bloom.bg/2LIO84u

Today’s announcement from the administration to restore integrity to the Renewable Fuel Standard is good news for farm country and builds off our E15 win. Read my full statement here: https://www.thune.senate.gov/public/index.cfm?p=press-releases&id=C7DAA1F9-933E-4DB6-A5C4-0482A1042AF4 …

U.S. Sen. John Thune (R-S.D.) today issued the following statement after the administration announced that it has reached a deal to restore integrity to the Renewable Fuel Standard (RFS) by account…