Bloomberg writers Jennifer A Dlouhy, Mario Parker, and Jennifer Jacobs reported yesterday that, “The Trump administration has agreed to a new plan for boosting renewable fuels and offsetting waivers exempting oil refineries from mandates to use them, according to three people familiar with the matter who asked for anonymity before a formal announcement.

“The tentative agreement, which follows weeks of negotiations, would allow the Environmental Protection Agency to offset those waivers in response to criticism from industry advocates and Midwestern politicians that the exemptions have hurt demand for corn-based ethanol and soybean-based biodiesel.

Dlouhy, Parker and Jacobs explained that,

Under the deal, the EPA would factor recent waivers into new annual biofuel quotas, by adjusting the targets to reflect a three-year rolling average of exemptions. White House officials also rejected a bid by oil industry allies to prevent spikes in the prices of biofuel compliance credits refiners use to prove they have fulfilled the targets.

“The agreement reflects a deal pitched by farm-state senators to the president earlier this month.”

Yesterday’ article cautioned that, “The deal could still unravel as administration officials work to translate broad commitments into formal regulations. There is a narrow window for the administration to codify the changes, as the EPA is legally required to finalize 2020 biofuel-blending quotas by Nov. 30.”

The Trump administration has agreed to a new plan for boosting renewable fuels and offsetting waivers exempting oil refineries from mandates to use them, according to three people familiar with the…

Also yesterday, Reuters writers Stephanie Kelly and Humeyra Pamuk reported that, “The Trump administration is close to finalizing a deal that would boost U.S. biofuels consumption and is aiming to get it signed by President Donald Trump on Friday, two sources familiar with the matter said on Tuesday.

“The policy change is intended to assuage anger in U.S. farm country, a key political constituency for Trump, after the administration exempted 31 oil refineries in August from their obligations under the U.S. Renewable Fuel Standard – a law requiring that corn-based ethanol and other biofuels be blended into the nation’s fuel.”

Only in Washington is it a good idea to burn food as fuel – and force Americans to pay for it. The corn ethanol mandate is egregious corporate welfare. @RealDonaldTrump ought to say NO to a bad deal that will cost PA refining jobs and consumers more money. https://twitter.com/jendlouhyhc/status/1179126075336675332 …

The Trump administration has agreed to a new plan for boosting biofuels and offsetting waivers exempting oil refineries from mandates to use them.https://bloom.bg/2mNrEG4  w @JenniferJJacobs @MarioDParker

The Reuters article stated that, “Sources said the administration aims to announce the final deal next week and is unlikely to include a price cap for the biofuel blending credits that refiners must earn or purchase to comply with the RFS, a measure the oil industry was seeking as a concession in the biofuel deal.”

The Trump administration has agreed to a new plan for boosting renewable fuels and offsetting waivers exempting oil refineries from mandates to use them, according to three people familiar with the…

Looks like the deal is what @USDA proposed TWO YEARS AGO, #ethanol #corn #soybeans #biodiesel

Kelly and Pamuk pointed out that, “The deadline to finalize the RFS mandates for 2020 is Nov. 30, giving the EPA two months to draft a plan, release it for public comment and finalize it.”

If this is the same plan that was leaked a couple of weeks ago, my position is unchanged. It is a bad deal for ag because it never recovers all of the waived SRE gallons. https://twitter.com/JenniferJJacobs/status/1179128248187404288 …

Yesterday’s article added that, “The work on the biofuel policy change had run into a brief slowdown after senators from oil states in mid-September asked the administration for the price cap for biofuel credits, four sources familiar with the matter told Reuters. 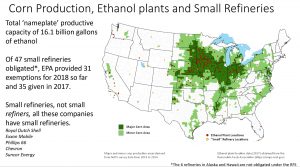 Graph from Seth Meyer on Twitter, September 20, 2019 (@SethMeyerMU, https://twitter.com/SethMeyerMU/status/1175052257798365186). Dr. Meyer is a Research Professor at the Food and Agricultural Policy Research Institute at the University of Missouri.

“The agency’s proposal to boost biofuels here would calculate a three-year rolling average of total biofuels gallons exempted from the RFS mandate under its Small Refinery Exemption program and use it to boost blending quotas for the coming year, according to previous reporting by Reuters.

“That would be in addition to a tentative agreement for a one-time boost to next year’s blending volumes to satisfy a 2016 court decision that the Obama administration had illegally lowered the RFS mandate by 500 million gallons, the sources said.”