“The deals for about 600,000 tonnes, slated for shipment from Pacific Northwest export terminals from October to December, were similar in size to a wave of buying earlier this month, two traders with direct knowledge of the deals said.”

In a separate Reuters article last week, Hallie Gu reported that, “China has given new waivers to several importers to buy U.S. soybeans exempt from retaliatory tariffs, in a goodwill gesture ahead of high-level trade talks next month, two sources familiar with the matter said on Tuesday.

“The waivers, offered in two batches, total around 5 million to 6 million tonnes, according to one of the sources. They came as China returned to the U.S. soybean market this month.”

More broadly, a Bloomberg News article last week pointed out that, “Investors have been watching for signs of whether China will boost U.S. farm imports, viewing the purchases as a proxy for the outlook on trade talks.”

On Wednesday, Bloomberg News reported that,

China imported 1.68 million tons of U.S. soybeans in August, the most in four months, before top negotiators from the two countries meet in October in a further attempt to resolve their trade dispute. 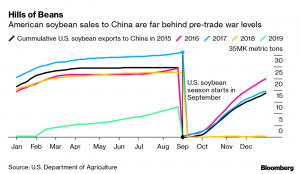 The Bloomberg article added that, “China bought 6.68 million tons of soybeans from Brazil, the country’s largest supplier in August, up from 6.42 million tons in July.

Despite the ongoing US-China trade dispute, Brazil’s 2019/20 (Feb/Jan) #soybean shipments have progressed at a reduced pace compared to the prior season – largely due to the impact of African swine fever on Chinese demand. 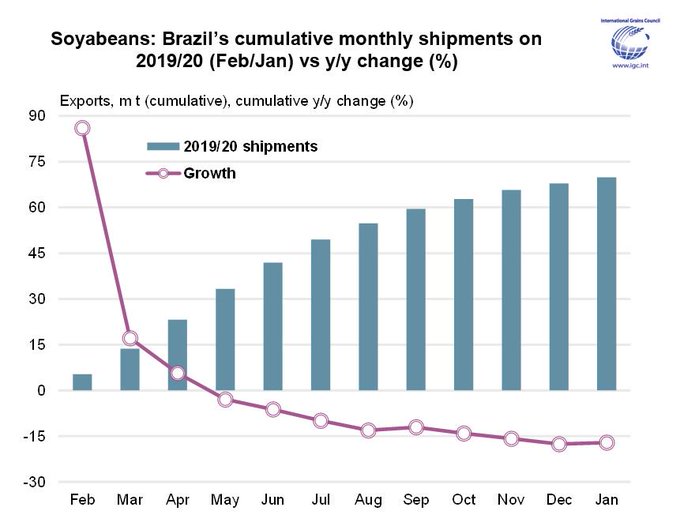 Meanwhile, Wall Street Journal writer Lin Zhu reported last week that, “China’s Commerce Ministry on Thursday said that Chinese companies have agreed to buy ‘sizable amounts’ of soybeans and pork from the U.S. ahead of planned high-level talks in Washington next month.

“Chinese companies have been asking about prices for the U.S. farm goods, Gao Feng, the ministry’s spokesman said at a routine media briefing. He didn’t specify the quantity or the value of the purchases.”

The Journal article stated that,

In the 12 months through July, agriculture and foodstuff exports from the U.S. to China dropped by nearly $10 billion, compared with the same period a year earlier, a plunge of over 50%.

“Oil seeds including soybeans accounted for more than $7 billion of that drop, with those exports down by 65%.” 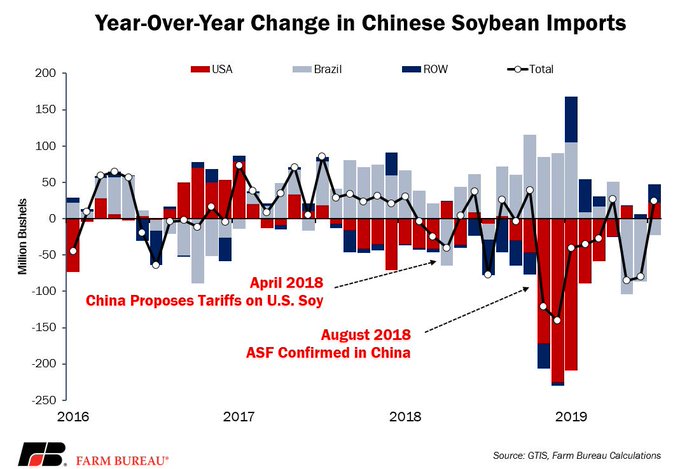 The Reuters article explained that, “The United States and China are preparing for another round of high-level trade talks in early October in Washington to try to find a way out of their nearly 15-month trade war.

“CNBC reported on Thursday that the talks are scheduled for Oct. 10-11 in Washington, citing people familiar with the arrangements.”

There are many reports in the US recently on China buying US farm products. The purchase obviously signaled China’s goodwill, not concessions. China and the US need to create real progress in trade talks so that such purchase can be sustained.

And with respect to pork, Bloomberg News reported last week that, “Chinese companies are preparing to purchase more U.S. pork, according to people familiar with the situation, as the government battles against domestic shortages and top trade negotiators from both nations plan to meet in Washington next month.”

The Bloomberg article noted that, “The imports may be part of China’s efforts to ease tensions with the U.S. as they strive to reach a trade deal. They also come at a time when the Asian nation, the world’s biggest pork consumer, desperately needs more of the meat. China has already boosted pork imports from the U.S., with July imports at the highest in two years, as the government also makes purchases for its state reserves.” 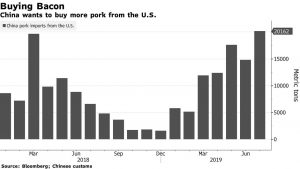 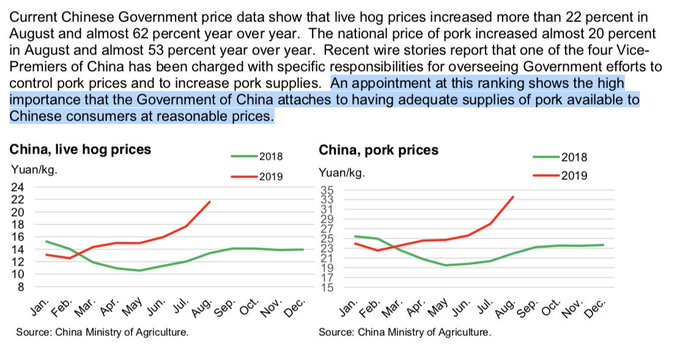 “The announcement comes less than two weeks after Argentina, the top soymeal supplier, announced that China, the world’s biggest soymeal consumer, would allow imports from the country for the first time following decades of talks.”

With a sharp fall in the US 2019/20 #soybean crop anticipated to be only partially offset by increased production elsewhere, world output may decline by 6% y/y. 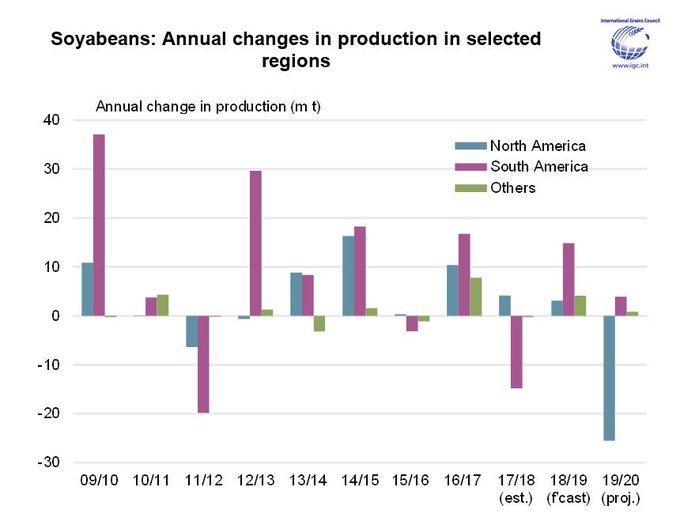 Also last week, Bloomberg News reported that, “China is considering allowing imports of Brazilian soybean meal as the top pork-consuming nation looks to diversify sources of the key ingredient for pig feed, according to people familiar with the matter.”

“Opening the door to Brazilian meal would follow a similar arrangement with Argentina earlier this month. China has a large amount of soy-crushing capacity and usually prefers to import raw soybeans and process them domestically, but with the ongoing trade war with the U.S., Beijing wants to keep its options open for alternative suppliers,” the Bloomberg article said.