in Top Ag News
U.S., China trade talks resumed last week in Washington, D.C., and extended into the weekend.  As the negotiations unfolded, Secretary of Agriculture Sonny Perdue indicated that China committed to buy an additional 10 million metric tons of U.S. soybeans.  And citing progress made in the talks, President Trump tweeted Sunday that, “I will be delaying the U.S. increase in tariffs now scheduled for March 1.”   News items tracking these developments are highlighted in today’s update. Earlier this week, Associated Press writers Joe McDonald and Paul Wiseman reported that, “The United States and China resume talks Tuesday aimed at ending a fight over Beijing’s technology ambitions ahead of a deadline for a massive U.S. tariff hike.

At week’s end, Bob Davis, Alex Leary and Lingling Wei reported on the front page of Saturday’s Wall Street Journal that, “President Trump, citing progress in U.S.-China trade talks, said he is looking at extending a deadline to raise tariffs and hoping to meet next month with Chinese leader Xi Jinping to complete a broad trade agreement.
“His comments in the Oval Office followed four days of talks between U.S and Chinese negotiators, which Mr. Trump extended through the weekend. ‘We’re having good talks, and there’s a chance that something very exciting can happen,’ he said. “Among the accomplishments that Mr. Trump cited was a pact with Beijing to curb currency manipulation, which Treasury Secretary Steven Mnuchin called ‘one of the strongest agreements ever on currency.’” With respect to agriculture, the Journal writers explained,

One concession cited by the administration is a Chinese pledge to purchase an additional 10 million metric tons of U.S.-grown soybeans. 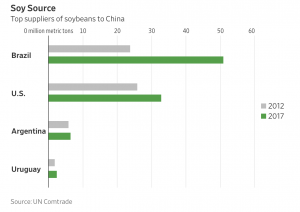 Sec. Sonny Perdue ✔@SecretarySonny
BREAKING: In Oval Office meeting today, the Chinese committed to buy an additional 10 million metric tons of U.S. soybeans. Hats off to @POTUS for bringing China to the table. Strategy is working. Show of good faith by the Chinese. Also indications of more good news to come.
2:54 PM – Feb 22, 2019

Writing in Saturday’s Washington Post, David Lynch reminded readers that, “Chinese officials have reportedly offered to buy an additional $30 billion worth of U.S. agricultural exports each year, more than doubling the current $24 billion figure,” a variable that was reported on Thursday at Bloomberg News.
Specifically, the Bloomberg article stated: “China is proposing that it could buy an additional $30 billion a year of U.S. agricultural products including soybeans, corn and wheat as part of a possible trade deal being negotiated by the two countries, according to people with knowledge of the plan.”
View image on Twitter

China proposing to secure $30 Bil additional US ag goods on top of their prior non trade war US purchases to reduce US trade deficit . Using 2017 as baseline- that would equate to nearly $50 Bil of US ag goods if US/China deal gets done. That’s a big big deal!

More narrowly on U.S. corn exports to China, Bloomberg writers Shruti Singh and Alyza Sebenius reported early last week that, “U.S. corn sales to China have been part of the ongoing trade discussions between the nations, President Donald Trump said from the White House Oval Office Tuesday.
“‘These are not just, you know, let’s sell corn or let’s do this,’ Trump said, referring to trade discussions. ‘It’s going to be selling corn, but a lot of it, a lot more than anyone thought possible,’ he said, adding that the talks with China are ‘going very well.’” 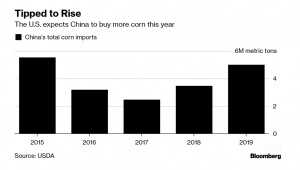 In a follow-up article Friday, Bloomberg News reported that, “China’s state grain buyer is preparing to snap up more U.S. corn in anticipation of a trade deal between the two countries, according to people familiar with the matter. “Sinograin was in the market agreeing contract terms for potential purchases on Thursday so it could act quickly in the event of an agreement being reached during talks in Washington, the people said, asking not to be identified because the matter is confidential. “The deals would dovetail with a proposal by Beijing to buy an additional $30 billion a year of U.S. agricultural products including corn, soybeans and wheat as part of a possible agreement.” And Bloomberg writer Shruti Singh reported Saturday that, “China is expected to make its next round of American soybean purchases ‘relatively quickly,’ while corn, ethanol, beef and poultry also have been part of trade discussions between the two countries, according to U.S. Agriculture Secretary Sonny Perdue.” The article pointed out that, “Perdue expects China’s purchases of soybeans to be so-called old crop, meaning the supplies U.S. farmers harvested in the fall. U.S. inventories are expected to double this year amid rising yields and a drop in exports to China.

“‘Frankly the way the Chinese operate, I would not be surprised if they had not already begun to place some orders,’ Perdue said. ‘I am optimistic and hopeful that these 10 million metric tons will be done in the very near future,’ he said.

In more detailed perspective on the Chinese commitment to purchase the additional 10 million metric tons of U.S. soybeans, Bloomberg writers Shruti Singh and Isis Almeida explained on Friday that, “Since the U.S.-China trade truce began in early December, Chinese buyers have scooped up at least 6.9 million tons of American beans, government data show. People familiar with the transactions have said the Chinese have already bought close to 10 million tons.” “On Friday, a data dump from the U.S. Department of Agriculture showed net-export sales to China during the six weeks ended Feb. 14 totaled 3.92 million metric tons for the 2018-2019 season. That was basically in line with previously reported sales during the period,” the Bloomberg article said. 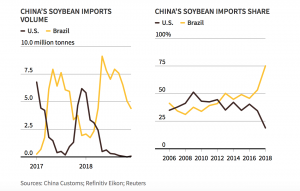 “U.S. farm country reels from the trade war,” Reuters Graphics (February 22, 2019). “After agreeing to a 90-day trade war truce on Dec. 1, Chinese firms resumed purchases of soybeans from the United States, but at volumes well below previous years.”

In other soybean trade news last week, USDA noted on Thursday, in its quarterly Outlook for U.S. Trade publication, that: “Oilseeds and products exports are projected at $27.8 billion, down $100 million from November expectations, driven by lower soybean volumes.” And Reuters writer Dominique Patton reported last week that, “China, the world’s largest importer of soybeans, will rely on overseas purchases for supplies of the oilseed, even as it tries to revive domestic production, a top official said on Wednesday.” The article noted that, “‘We will for sure trade soybeans in the international market,’ [Agriculture Minister Han Changfu] said, adding that the United States is an ‘important partner’ in soybean trade.” In a related article, Wall Street Journal writers Thomas Grove and Anatoly Kurmanaev reported Thursday that, “Russia’s overall trade with China, its biggest individual trading partner, rose more than 27% to over $100 billion last year, according to Chinese trade data. The trade has mostly involved oil, gas and metals. But Russian agricultural exports also are growing, especially soybeans, which have risen more than 10-fold in four years to nearly 1 million tons.” 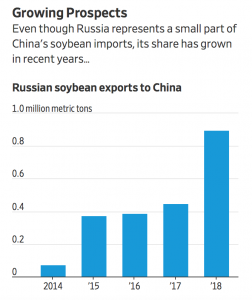 With respect to future U.S. export market share, Reuters writer Humeyra Pamuk reported last week that, “The United States will be able to quickly recover lost markets for U.S. farm products to China once Washington and Beijing clinch a trade deal, U.S. Agriculture Secretary Sonny Perdue said on Thursday.” But since those markets are currently constrained, Ms. Pamuk reported on Friday that, “U.S. Department of Agriculture has paid out $7.7 billion so far to farmers, William Northey, Undersecretary for Farm Production and Conservation, said on Friday, in aid designed to offset the negative impact of tariff imposition.” As trade talks continued, Reuters writer Rajesh Kumar Singh reported Saturday that, “U.S. and Chinese negotiators met for over seven hours on Saturday to resolve their trade dispute and avoid an escalation of the tit-for-tat tariffs that have already disrupted global commerce, slowed the world economy and roiled financial markets. After noting that “the two sides will meet again on Sunday morning,” the article stated that, “Saturday marked the fifth straight day of the negotiations between the world’s two biggest economies.” “The Chinese delegation is scheduled to leave for Beijing on Monday, according to a person familiar with their itinerary,” the article said.

Very productive talks yesterday with China on Trade. Will continue today! I will be leaving for Hanoi, Vietnam, early tomorrow for a Summit with Kim Jong Un of North Korea, where we both expect a continuation of the progress made at first Summit in Singapore. Denuclearization?

On Sunday, Bloomberg News reported that, “President Donald Trump said he’ll extend a deadline to raise tariffs on Chinese goods until he can meet Chinese President Xi Jinping after the two sides made ‘substantial progress‘ in the latest round of trade talks that wrapped up Sunday in Washington.”

I am pleased to report that the U.S. has made substantial progress in our trade talks with China on important structural issues including intellectual property protection, technology transfer, agriculture, services, currency, and many other issues. As a result of these very……

….productive talks, I will be delaying the U.S. increase in tariffs now scheduled for March 1. Assuming both sides make additional progress, we will be planning a Summit for President Xi and myself, at Mar-a-Lago, to conclude an agreement. A very good weekend for U.S. & China!

Pleased to see this step taken by the President. Tariffs have hurt our farmers in central Illinois and it’s important the dialogue between us and the Chinese continue without escalated tensions so an agreement can be reached and trade markets opened.