Tom Mitchell reported on Wednesday at The Financial Times Online that, “Chinese officials are offering to increase purchases of US agricultural products as they seek an interim agreement between Beijing and Washington that will stave off a new round of tariff hikes on October 15, according to people briefed on the two countries’ ongoing negotiations.

“China’s lead trade negotiator, Vice Premier Liu He, is scheduled to begin two days of talks with US Trade Representative Robert Lighthizer and Treasury Secretary Steven Mnuchin on Thursday, followed by a meeting with President Donald Trump on Friday if the discussions go well.”

Despite US sanctions announced this week against Chinese companies and officials allegedly involved in human rights abuses in Xinjiang, Mr Liu’s team is offering to boost annual purchases of soy beans to 30m tonnes compared with 20m at present. The extra purchases would be equivalent to about $3.25 bn of orders at current rates.

“China would also make a raft of changes to non-tariff barriers that have long frustrated the US Department of Agriculture and American farmers.”

American producers are unlikely to fully regain their lost market share in China, according to Decker Walker, the firm’s global head of agribusiness and one of the study’s lead authors. ‘My personal view is less than half of that demand will come back, even if a trade deal is concluded in the near term,’ he said.

“The findings by a blue-chip management consulting firm could feed mounting fears among major U.S. agricultural players that the damage done from a tariff war that has already dragged on for more than a year will extend long after a deal is reached and a $28 billion trade aid program for farmers ends.”

China promises to buy 10mmt of #soybeans, so is that an additional 10mmt or the same 10mmt from Feb 22, but we mean it this time? 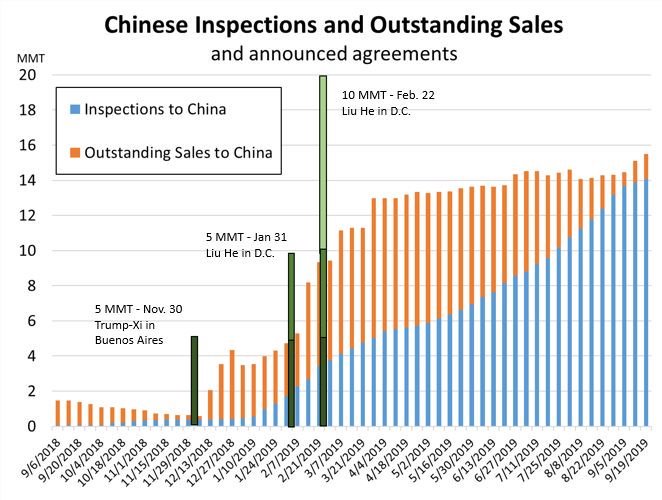 And Wall Street Journal writers Jacob Bunge and Kirk Maltais reported earlier this week that, “The U.S. government is marketing the nation’s crops and meat in smaller countries as Washington and Beijing continue to spar over trade.

“Ted McKinney, undersecretary for trade at the U.S. Agriculture Department, said the agency is mounting more trade missions and spending more time in lower-profile markets such as Guatemala to find buyers for a glut of U.S. farm goods that has grown over the past year as China curtailed purchases from the U.S.” 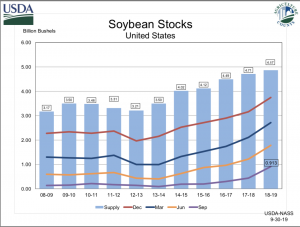 Bunge and Maltais pointed out that, “Over the first eight months of 2019, U.S. agricultural exports have declined 4% from last year’s level, according to USDA data. China’s purchases of U.S. farm exports dropped by more than half, from $19.5 billion in 2017 to $9.1 billion last year, after China put tariffs on U.S. soybeans, pork, milk and other products.” 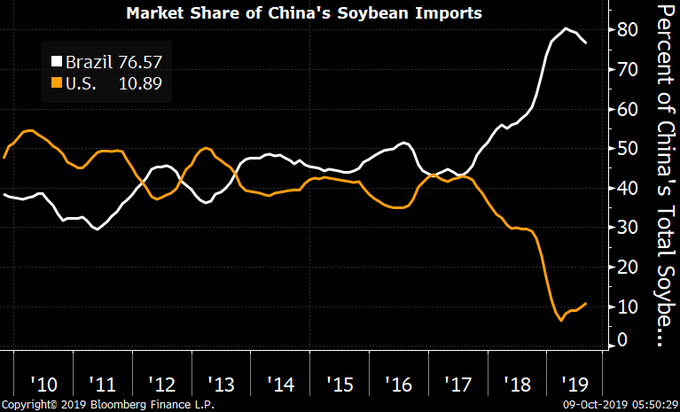 Ted McKinney, undersecretary for trade at the USDA, says China has recently started following through with promises to restart purchases of some U.S. agricultural products https://on.wsj.com/2pVZFFr 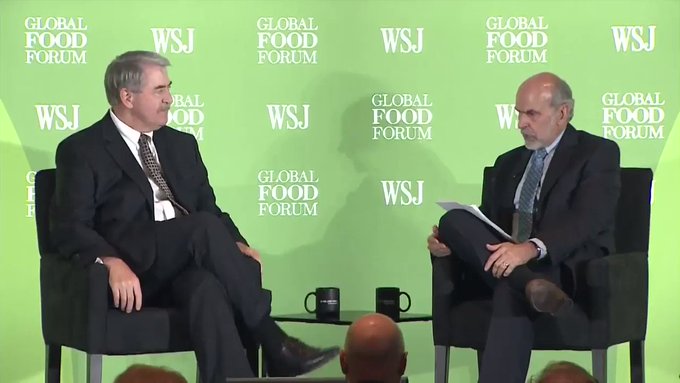 The Journal article also stated that, “Mr. McKinney said China in recent weeks has started following through with a promise to restart purchases of some U.S. agricultural products—specifically soybeans—though at a slower pace than the Trump administration had expected. Trade negotiators from the U.S. and China are scheduled to meet in Washington on Thursday and Friday.”

Private exporters reported to @USDA #export sales of 398,000 MT of #soybeans for delivery to #China during the 2019/2020 MY. https://www.fas.usda.gov/newsroom/private-exporters-report-sales-activity-china-229 …

Additionally, Reuters News reported this week that, “President Donald Trump said on Wednesday there was a very good chance that the United States and China will reach a trade agreement.

“Speaking to reporters a day before high-level trade talks resume in Washington, Trump said: ‘If we can make a deal, we’re going to make a deal, there’s a really good chance.’”

And Bloomberg writer Jenny Leonard reported on Thursday that, “The White House is looking at rolling out a previously agreed currency pact with China as part of an early harvest deal that could also see a tariff increase next week suspended, according to people familiar with the discussions.

“The currency accord, which the U.S. said had been agreed to earlier this year before trade talks broke down, would be part of what the White House considers to be a first-phase agreement with Beijing. It would be followed by more negotiations on core issues like intellectual property and forced technology transfers, the people said.”