China Plans Purchase of U.S. Farm Products, According to Reports “‘We expect to have another principal-level call this week, and to the extent we make significant progress, I think there’s a good chance we’ll go there later,’ Mnuchin said Monday at a briefing for reporters at the White House.”

On Tuesday, Bloomberg’s Justin Sink reported that, “President Donald Trump reiterated that he could impose additional tariffs on Chinese imports if he wants, after promising to hold off on more duties in a trade-war truce he reached with China’s Xi Jinping last month.

“‘We have a long way to go as far as tariffs where China is concerned, if we want. We have another $325 billion we can put a tariff on, if we want,’ Trump said. ‘So, we’re talking to China about a deal, but I wish they didn’t break the deal that we had.’

“China said Wednesday that further levies would complicate the negotiations.” 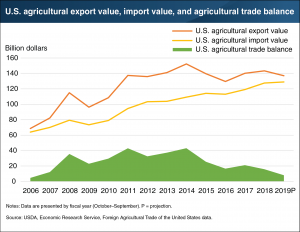 ‘Right now we’re having principal-level calls and to the extent that it makes sense for us to set up in-person meetings, I would anticipate that we would be doing that,’ Mnuchin told Reuters.

The Reuters article noted that, “Asked if Thursday’s call could lead to a face-to-face meeting, Mnuchin said: ‘It’s possible, but I’m not going to speculate on the outcome.’

“Lighthizer’s office later confirmed that the conversation took place as scheduled, but gave no details.

“China’s foreign ministry said on Friday the two sides had discussed ways to implement the consensus reached by the two countries’ presidents, but gave no other details.”

Meanwhile, Reuters writer Tom Polansek reported last week that, “China made its biggest purchase of U.S. sorghum since April last week, according to U.S. Department of Agriculture data issued on Thursday, as Washington and Beijing revive discussions to end their trade war.

“The world’s top sorghum importer bought 51,072 metric tons of the grain even though China imposed a 25% tariff on American shipments in July 2018 as part of the tit-for-tat trade dispute. The purchases will likely be used to feed livestock or make a fiery Chinese liquor called baijiu.

“China has made other modest purchases of sorghum since the beginning of June.”

Mr. Polansek noted that, “The United States and China agreed last month to restart trade talks that stalled in May. U.S. President Donald Trump said at the time he would not to impose new tariffs and U.S. officials said China agreed to make agricultural purchases. But Trump said on July 11 that China was not living up to promises to buy U.S. farm goods.

“U.S. farmers welcomed the latest sorghum sale as the crop was one of the first casualties of the trade war, which has also slowed exports of U.S. soybeans and pork to China.”

On Sunday, Bloomberg writer Dominic Lau reported that, “China’s importers have started making arrangements to buy U.S. agricultural products, Global Times’s Editor-in-Chief Hu Xijin said in a tweet, without specifying where he got the information.

“The possible purchase of American farm products — which adds to recent gestures of goodwill between both sides — also indicates U.S.-China trade talks will restart soon, according to the tweet.”

Based on what I know, Chinese importers have started arrangement of purchasing US agricultural products.This is a prominent part from Chinese side as the two countries have signaled goodwill to each other recently. It also indicates China-US trade consultations will restart soon.

The Bloomberg article added that, “Senior U.S. and Chinese officials spoke by phone last week, the second call since a late June summit where the two sides agreed to a truce in their ongoing trade spat.”

The Reuters article stated that, “Chinese businesses have made inquiries with U.S. exporters to buy crops and agricultural products and applied for the lifting of tariffs, Xinhua said, citing Chinese authorities.

“Herring, president of the National Pork Producers Council, told a House Agriculture subcommittee on Tuesday that retaliatory tariffs imposed by China and other countries are ‘one of the most damaging threats‘ to his industry. The dispute with the Asian nation has cost producers $8 per animal annually.” 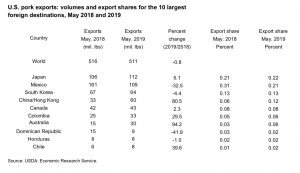 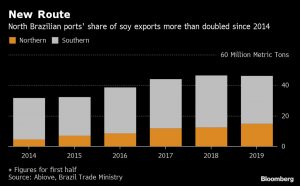 “That’s according to Archer-Daniels-Midland Co., one of the world’s largest agricultural commodities trader.

The tit-for-tat tariff spat, which has already shrunk purchases of American beans, probably will mean China will try to reduce its dependence on the U.S. by buying from elsewhere and improving yields of its own production, ADM Chief Financial Officer Ray Young said.

“‘We should not be naive to assume that longer term, China will not want to become more self-reliant on their own supply of agriculture products,’ he said at the Kansas Fed Ag Symposium Tuesday. ‘I think this has been a wake-up call for China in terms of understanding the relationship between the U.S. and China and how they will view food security in the future.’”