“Both state-owned and privately run firms purchased between 12 and 15 cargoes, or as much as 1 million metric tons, said the people, who asked not to be identified because the information is private. Most of the cargoes are for shipment this year, with a few for January, they said.”

“The move may help lay the groundwork for a more conciliatory meeting between high-level officials next week in Washington, when they try to resolve the trade war between the nations,” the Bloomberg article said.

And Bloomberg writers Tatiana Freitas and Dominic Carey reported on Thursday that,

U.S. soybean-export sales doubled last week to the highest in seven months as shipments to China surged in a break in the 13-month trade war.

“This month, China has issued waivers on tariffs imposed as part of the trade dispute with the U.S. The countries are set to resume high-level negotiations next week.” 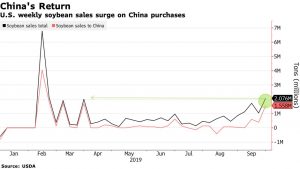 “Now, with new talks looming and China buying soybeans again, soybean futures have climbed 5.7% on the Chicago Board of Trade since Sept. 6 to $9.12 a bushel on Thursday, a level unseen since July. China’s big 100,000-ton-plus purchases began in mid-September,” the Journal article said. 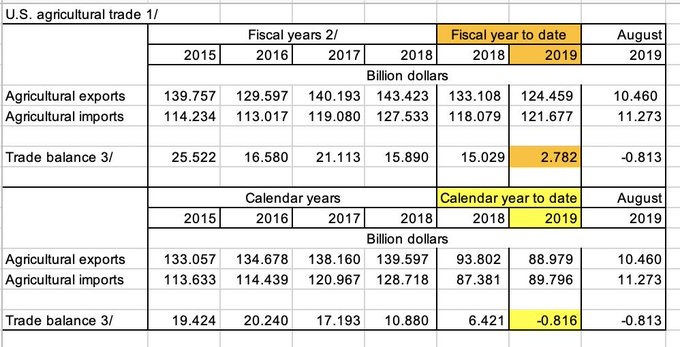 And on Monday, Wall Street Journal writers Josh Zumbrun and Michelle Hackman reported that, “The long-frozen U.S.-China trade talks are showing signs of a possible thaw, as a Chinese trade team returns to Washington and Chinese commodity buyers return to America’s soybean market.

“Farm exports, new purchasing deals and prices have all been climbing again in recent weeks. Reports from the Commerce and Agriculture departments last week showed China making some of its largest purchases in over a year.” 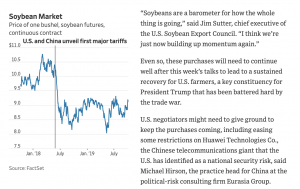 The Journal article noted that, “When trade tensions erupted early last summer, the price of soybeans dropped by nearly $2 a bushel. The market has yo-yoed with the ups and downs of the talks ever since.

“The U.S. and China struck a tentative truce in November, which stabilized the market, but when those talks broke apart in May this year, prices fell to nearly $8 a bushel, a 25% decline from prices seen in early 2018, before the trade war began.

“Spirits had been buoyed in the spring when the U.S. and China appeared to be nearing a deal, but then fell apart.” 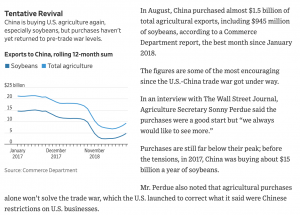 “On one hand, they have good reason to plant aggressively given China has largely turned its back on U.S.-grown oilseed. Then again, trade wars don’t last forever and the spread of African swine fever in Asia is undermining feed demand. Weather and currency swings offer further variables.

The upshot is expected to be a modest 1.8% increase in planted area from the previous season, according to the average estimate of 10 analysts surveyed by Bloomberg. That would be the slowest rate of expansion in 13 years, trailing the 3.5% five-year average and the 5% annual rate of the past 10 seasons.

Also with respect to Brazil, a report late last month from USDA’s Foreign Agricultural Service (FAS) (“Brazil: Oilseeds and Products Update“) stated that, “In the first seven months of this season, Brazil exported almost 55 mmt, which is 13 percent less than at this point last season. So far this season, sales to China made up 75 percent of total volume shipped. In this same timeframe, exports to China are down by 17 percent year-on-year, with volumes declining more rapidly – in percentage terms – in the last several months. In August 2019, Brazil shipped 4.1 mmt of soybeans to China, which represents a 40 percent decline from same month last year.” 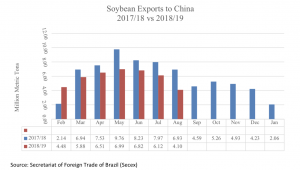 The FAS update explained that, “Several factors account for falling exports to China, most notably lower demand due to the outbreak of African Swine Fever (ASF), which curtailed feed demand. In the remaining five months of the season, Post anticipates further downward pressure on sales to China. Aside from lower overall demand due to ASF, competition from U.S. soybeans is likely to pick up. In mid-September, Beijing announced that it would waive import duties on certain U.S. agricultural products, including soybeans. At this point, there is no clear market take on whether the current détente between the United States and China will be long lasting. However, given that China typically sources U.S. soybeans in September-December timeframe, the news had dampened Brazilian premiums, and exerted downward pressure on sales at least in the short term.”

On the issue of U.S. pork exports to China, Reuters writer Tom Polansek reported on Friday that, “JBS USA will remove a growth drug banned by Beijing from its U.S. hog supply, the company said on Friday, accelerating the competition for pork exports as China grapples with a devastating pig disease.

“The meat packer’s move away from the drug ractopamine, a feed additive, shows how companies are maneuvering to take advantage of an expected shortage in China, the world’s largest pork consumer, due to African swine fever (ASF).”

China is bearing the brunt of the tariffs, they need to talk to us, says Larry Kudlow. https://bloom.bg/30PFUM9 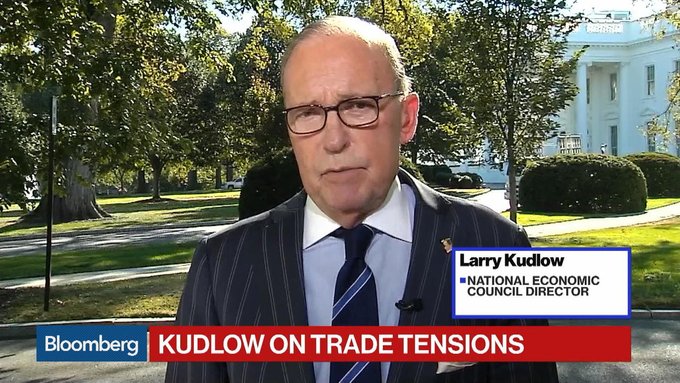 More broadly with respect to U.S., China trade talks, Bloomberg writers Shawn Donnan and Jenny Leonard reported on Sunday that, “Chinese officials are signaling they’re increasingly reluctant to agree to a broad trade deal pursued by President Donald Trump, ahead of negotiations this week that have raised hopes of a potential truce.

China narrows the scope for a U.S. trade deal https://bloom.bg/2VlCRue 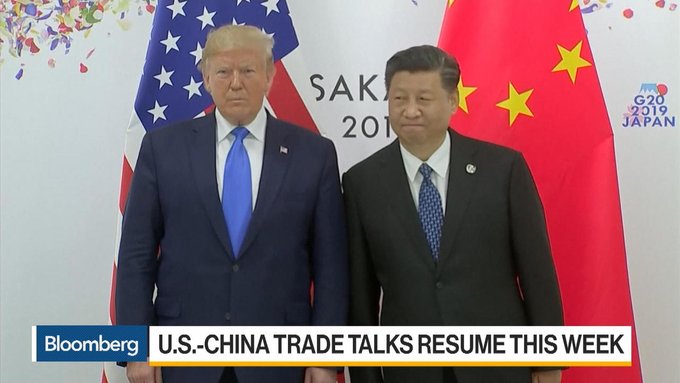 “In meetings with U.S. visitors to Beijing in recent weeks, senior Chinese officials have indicated the range of topics they’re willing to discuss has narrowed considerably, according to people familiar with the discussions.

Chinese officials are signaling they’re increasingly reluctant to agree to a broad trade deal pursued by Trump. @jendeben on the latest 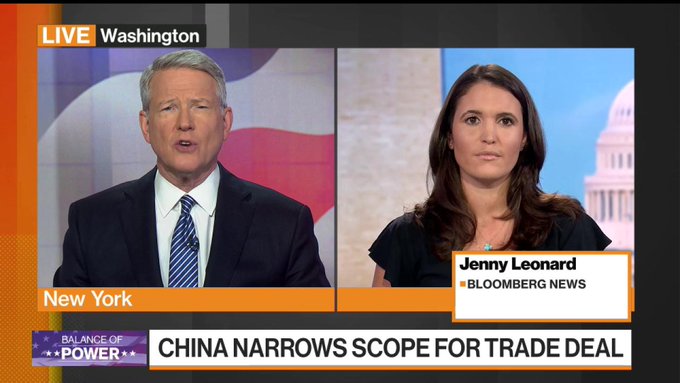 Navarro on @NPR says it’s a big deal or no deal with #China – that @realDonaldTrump has a “steely resolve” on the issue.

“Vice Premier Liu He, who will lead the Chinese contingent in high-level talks  that begin Thursday, told visiting dignitaries he would bring an offer to Washington that won’t include commitments on reforming Chinese industrial policy or the government subsidies that have been the target of longstanding U.S. complaints, one of the people said.”

Also on Monday, Bloomberg writers Shawn Donnan and Jenny Leonard reported that, “The Trump administration placed eight Chinese technology giants on a U.S. blacklist on Monday, accusing them of being implicated in human rights violations against Muslim minorities in the country’s far-western region of Xinjiang.”

The Bloomberg writers explained that, “The move, first reported by Reuters, still takes President Donald Trump’s economic war against China in a new direction, marking the first time his administration has cited human rights as a reason for action. Past moves to blacklist companies such as Huawei Technologies Co. have been taken on national security grounds.”

Following this development, on Tuesday, Bloomberg News reported that, “China signaled it would hit back after the Trump administration placed eight of the country’s technology giants on a blacklist over alleged human rights violations against Muslim minorities.