While not the most encompassing measure of crop productivity, yield, or production divided by land, is easy to compute.  Research confirms its value as farms with consistently higher yields are found to be more profitable over time (Nivens, Kastens, and Dhuyvetter, 2002; and Sonka, Hornbaker, and Hudson, 1989).  In addition, since land is a foundation input used in all crop production, percent change in yield provides insights across crops.  In short, yield is a simple, useful metric.  In contrast, commonly-used livestock productivity measures are specific to a species and usually to a particular part of the production process, such as pigs per litter.  This article discusses a livestock productivity measure that is easy to compute and can be used to compare productivity across species.  It is analogous to yield in construction.  Specifically, livestock output is divided by the breeding stock that produces the animals that produce the output.  The latter will be referred to as the foundation herd.  By this measure, hogs clearly have the highest productivity gain over the last quarter century.

Beef: (total dressed carcass weight of beef cattle slaughtered at commercial facilities) divided by (average of the beef cow inventory on January 1 and July 1 of the calendar year lagged by 2 years)

Dairy: (total pounds of cow’s milk) divided by (average of the dairy cow inventory on January 1 and July 1 of the calendar year lagged by 2 years)

Hogs: (total dressed carcass weight of hogs slaughtered at commercial facilities) divided by (average of the hog breeding herd inventory on June 1, September 1, and December 1 of the prior calendar year and March 1 of the same calendar year)

Sheep: (total dressed carcass weight of lambs and sheep slaughtered at commercial facilities) divided by (inventory of breeding ewes 1 year or older on January 1 of the prior calendar year)

The analysis spans 1993, the earliest calendar year for which the chicken hatching flock by broilers and layers is available, through 2018, the last completed calendar year.  To dampen year-to-year variability and focus on long-term productivity, changes are computed between 5-year averages for 1993-1997 and 2014-2018.

Except for hogs, each denominator is only female animals to maintain consistency across species.  For hogs, only breeding stock, which includes boars, is available for all years.  If the share of boars in the hog breeding stock has changed little since 1993, then the change in productivity should be little affected by the use of hog breeding stock.

Meat production data are from USDA (US Department of Agriculture), Economics Research Service, which obtains the data from USDA, NASS (National Agricultural Statistics Service) reports.  USDA, NASS Quick Stats is the source for egg and milk production, as well as for animal inventory numbers except for the chicken hatching flock from 1993 to 2007.  The latter are from USDA, NASS, Chicken and Eggs – Annual Summary.  See data notes 1-4 for additional features of the productivity measures.

Productivity of hog production stands out.  It was 68% higher in 2014-2018 than in 1993-1997 (see Figure 1).  Next highest were dairy and broilers at 44% and 43%, respectively.  Productivity gains for beef and eggs are 17% and 13%, respectively.  In assessing the productivity of beef, it is important to keep in mind that calves from dairy cows that are not retained for the dairy herd are often fed out for beef and culled dairy cows are sold for beef.  If the share of beef coming from dairy cows and calves has changed since 1993, it could affect the change in productivity of beef production. 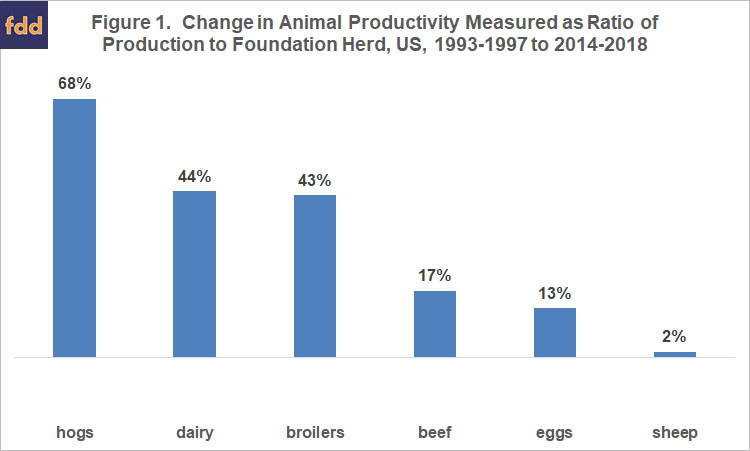 Productivity increased only 2% for sheep.  Non-commercial slaughter is much larger in sheep than other species due to demand from non-traditional markets.  This slaughter is a moving target and difficult to assess.  It is not captured in the productivity ratio, and thus could explain at least some of the small gain in sheep productivity. 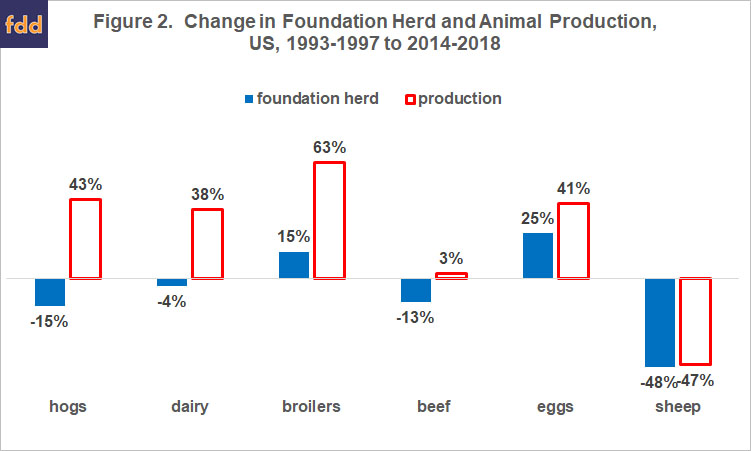 Caution is needed in comparing changes in this livestock productivity measure with changes in crop yields, in part because livestock production is a flow process while crop production is more akin to a stop-action process involving a time-defined planting-to-harvest period.  However, the comparison does provide one perspective.  Gains in hog productivity exceeded the increase in harvest yield of 9 large acreage field crops over the same period (see Figure 3).  The gain in dairy and broiler productivity is on par with the increase in corn yields and is exceeded only by the increase in peanut yields. 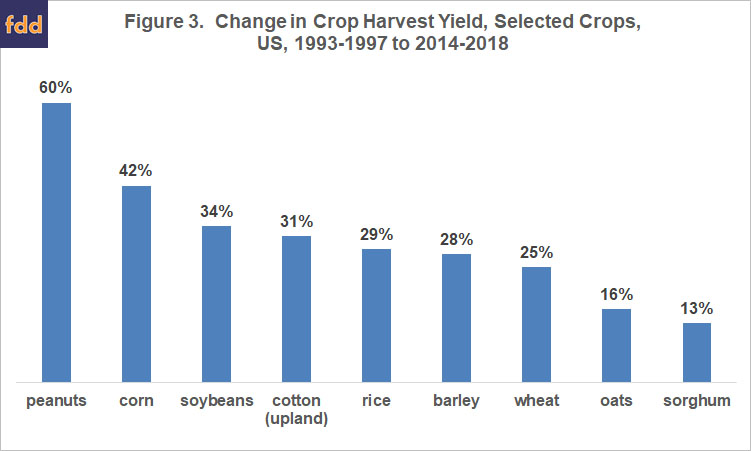 (1)  Commercial facilities include federally inspected and other slaughter plants.

(2)  Production of beef, pork, and lamb and mutton are based on packers’ dressed weight.

(3)  Production does not include on-farm slaughter.