This article documents the very late planting that is occurring in 2019, leading to the prospects of lower yields and higher than normal prevented planting from crop insurance. As a result, one suspects that corn prices will increase.  For many farms, price increases are needed to cause planting corn to be an economical alternative to taking prevented planting. As of yet, prices have not risen enough to induce farmers to plant corn after the final planting date if all inputs still need to be applied. Paradoxically, rising prices could reduce Price Loss Coverage (PLC) payments for 2018, which will be received this fall.

Currently, the National Agricultural Statistical Service (NASS) is reporting that 49% of the corn crop has been planted. This value is as of May 19 and is well below the 80% average progress for this week.  It is the lowest value on record, dating back to 1980 when these statistics became available on Quick Stats. Next lowest progress is 56% in 1995.

Very slow planting also is occurring in some states in the western Corn Belt:

There are four states with over 50% of the corn planted.  These states still lag five-year averages:

In past years, planting progress for corn during any given week can be large. The largest progress across the 18 largest states was 43% in 2013. The maximum planting during the 21st week of the year is 20%, which occurred in 2009.

Conditions do not suggest rapid progress this week. The Midwest received a great deal of rain last week, with over 2 inches of rain across northern Illinois, much of Iowa, and western Ohio. These saturated soils will take time to dry out.

At this point, the following expectations seem reasonable:

Corn prices have risen in recent days. For corn in Midwest states, the projected insurance price for corn is the average December settlement prices of Chicago Mercantile Exchange (CME) contracts during February. The 2019 projected corn price is $4.00 per bushel. The December contract settled at $4.04 on May 20th, almost the same as the projected prices and well above the $3.72 low on May 9th. Note that these are futures prices. Cash and forward bid prices are considerably lower. In central Illinois, fall delivery bids are about $.25 per bushel lower than futures prices.

A significant question is: Have corn prices risen enough to draw acres away from prevented planting once the final planting date arrives? To aid in answering the question, break-even cash corn prices that cause planting corn to have the same returns as taking prevented planting are presented in Table 1. Note, these are cash prices, not futures prices. Assumptions used in Table 1 are given in more detail in a May 14th farmdoc daily article. Briefly those assumptions are: 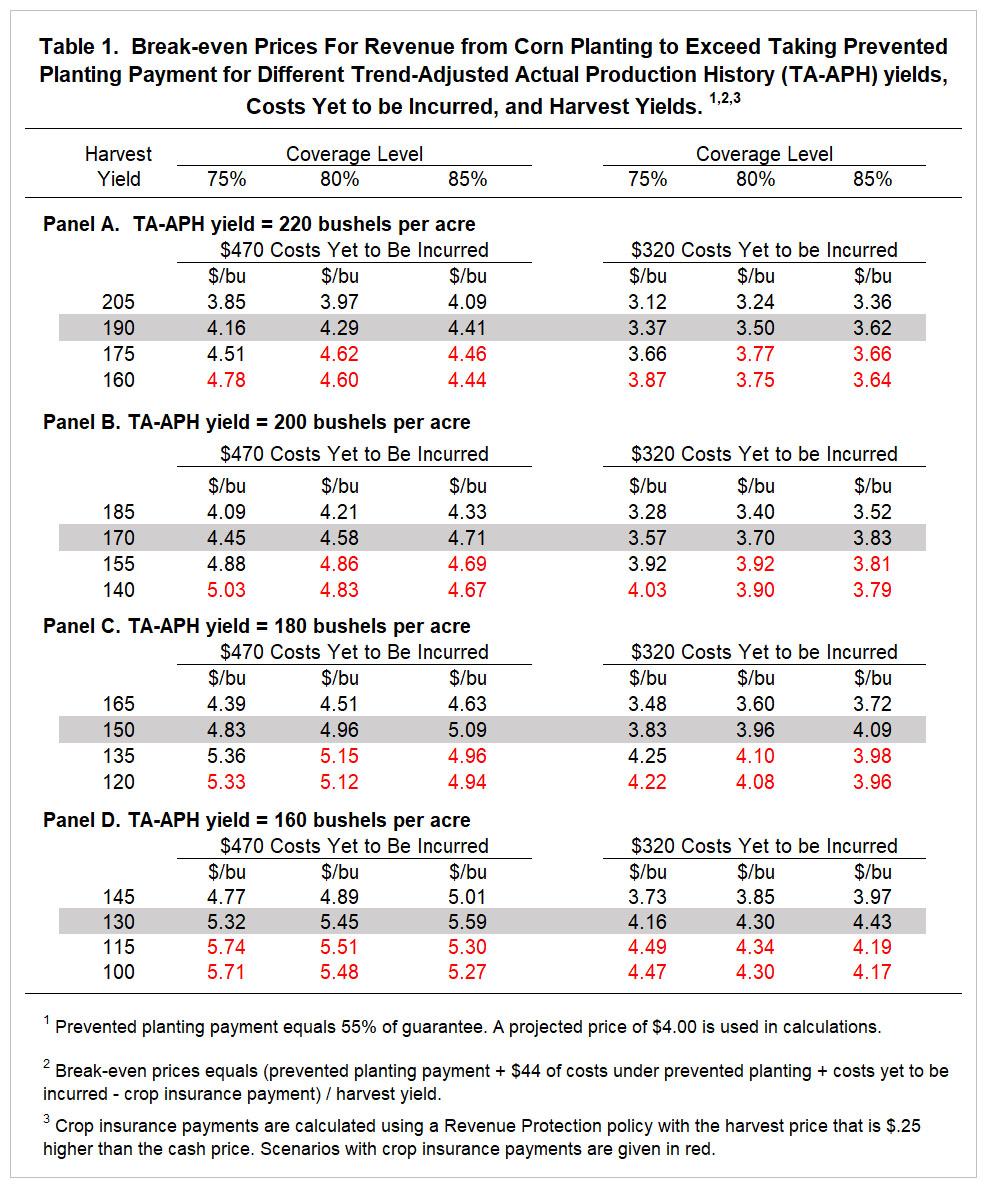 Field trial work at the University of Illinois suggests that expected yields are between 80 and 85% of maximum yield when planting occurs in early June (farmdoc daily, May 15, 2019). A decline of this nature would be roughly a 30 bushel per acre. Yields that are 30 bushels below the TA-APH are noted by a gray background in Table 1.

To provide more intuitions, Figure 1 shows the break-evens from Table 1 at the 85% coverage levels in graphical forms.  Note several items: 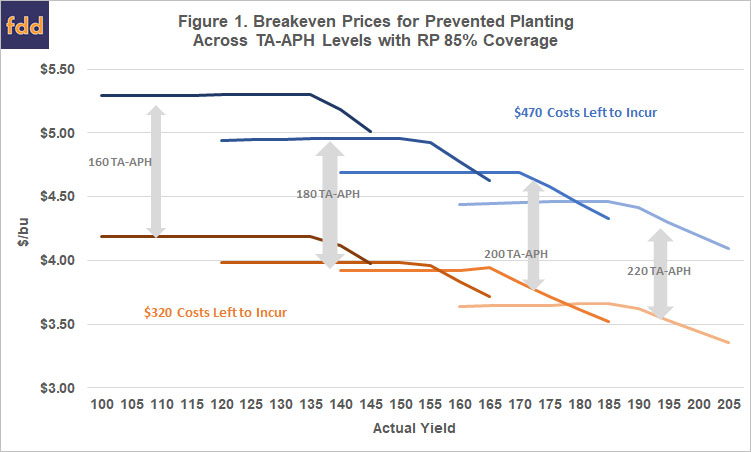 Higher prices in the summer months could increase the 2018 MYA price, resulting in lower payments for the 2018 crop by the Price Loss Coverage (PLC), Agricultural Risk Coverage at the county-level (ARC-CO), and ARC at the individual level (ARC-IC). This implication will be most directly felt by PLC, as ARC-CO is not likely to make payments (see farmdoc daily, April 2, 2019). Lower PLC payments will not impact a large number of farmers, as only 6.6% of corn base acres are in PLC. Still, budgeting for lower payments for those farmers seems prudent.

Price estimates for the current market year are available in the World Agricultural Supply and Demand Estimates (WASDE) reports for May beginning with the report released in May 1977 for the 1976 market year.  The corn market year starts September 1 and ends August 31.  Changes in the current market year price estimates are examined from the May WASDE until the final price for the year is released, which occurs in the November WASDE.  Note, the period of price change is over the growing season for the upcoming crop.  The largest percent increase in market year price is +11 per-cent for the 1987 market year.  This increase occurred during the drought-stressed growing period of the 1988 crop.  Next largest increases are both +4% for the 1978 and 2001 market years.  During the 2012 drought, the price for the 2011 market year increased +2%.

The recent 2019 May WASDE forecast a price for 2018 market year of $3.50, implying a potential PLC payment rate of $0.20 per bushel before adjusting for the sequestration amount and the 85% base acre payment factor.  An increase of 5.7% would eliminate PLC payments.  Such an increase has happened once.  The 2% increase in price that happened during the 2012 drought would increase the 2018 market year price to $3.57, reducing PLC payment to $0.13 from $0.20.

For farmland that has no inputs applied, cash corn prices must exceed $4.00 by large amounts for planting to have the same expected returns as taking prevented planting other than for fields with very high expected yields and individual farm insurance coverage levels below 80%.

Farmers should complete their own analysis of plant and prevented planting alternatives on a field by field basis.  As this article illustrates, the prevent plant decision is significantly impacted by expected yield, insurance coverage level, and planting costs already incurred.  There is no universal decision rule. The farmdoc Prevented Planting Module can be used to aid in making these decisions. The Prevented Planting Module is part of the Planting Decision Model, a Microsoft Excel spreadsheet within the FAST series available for download on farmdoc (here). The specific spreadsheet is available (here).

Another consideration is trade aid currently being crafted for 2019. If the decision is to distribute based on 2019 production, prevented planting become less favorable. A May 14th article entitled “Prevented Planted Decision for Corn in the Midwest” covers these issues).

When prevented planting becomes an option, we suggest farmers speak with crop insurance agents. There are additional risks to planting in terms of downside revenue risk and reductions in APH yields.

Nafziger, E. “Managing When Planting Is Delayed.” farmdoc daily (9):89, Department of Agricultural and Consumer Economics, University of Illinois at Urbana-Champaign, May 15, 2019.

Schnitkey, G. and C. Zulauf. “Late Planting Decisions in 2019.” farmdoc daily (9):83, Department of Agricultural and Consumer Economics, University of Illinois at Urbana-Champaign, May 7, 2019.