Wall Street Journal writer Vivian Salama reported last week that, “President Trump said China has started to buy U.S. agricultural products, and signaled optimism that his administration will be able to sign a trade deal with China before the 2020 presidential election.

“‘They are starting to buy our farm products big league,’ Mr. Trump said.”

Private exporters report sales of 260,000 MT of #soybeans for delivery to China during MY 2019/2020. https://www.fas.usda.gov/newsroom/private-exporters-report-sales-activity-china-223 …

‘We want them to be a customer, but we want them to play by the rules everybody else plays by,’ Perdue told representatives from the fruit and vegetable industries at the United Fresh conference Wednesday morning.

With respect to Thursday’s trade talks, Reuters writer David Lawder reported late last week that, “The discussions are seen focusing heavily on agriculture, including U.S. demands that China substantially increase purchases of American soybeans and other farm commodities, a person with knowledge of the planned discussions told Reuters.

“Two negotiating sessions over the two days will cover agricultural issues, while just one will be devoted to the strengthening of China’s intellectual property protections and the forced transfer of U.S. technology to Chinese firms.

“‘Sessions on agriculture will get a disproportionate amount of air time,’ the source said.” 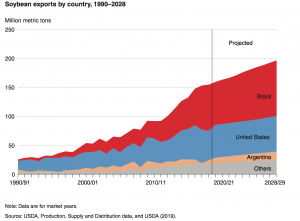 Meanwhile, Kayla Tausche reported on Thursday at CNBC Online that, “After trade talks with Chinese negotiators wrap in Washington this week, a small group of those officials are planning a trip to farm country to meet face to face with the producers whose finances have been deteriorating as the trade war drags on.

“The delegation, led by Vice Minister for Agriculture and Rural Affairs Han Jun, is currently planning follow-on visits to Bozeman, Montana, and Omaha, Nebraska, according to two people with knowledge of the visits. The Montana Farm Bureau on Thursday confirmed a Chinese delegation would be visiting with farmers in the state early next week.”

Baucus Says U.S. and China Want to Save Face in Trade Talks

Former U.S. Ambassador to China Max Baucus discusses U.S.-China trade negotiations that resume this month and where he sees them heading. He speaks on “Bloomberg Daybreak: Asia.” (Source: Bloomberg)

However, Bloomberg writers Mike Dorning, Jordan Fabian, and Mario Parker reported on Friday that, “A Chinese trade delegation canceled a planned visit to farms in the U.S. heartland, driving down stock indexes as investors turned pessimistic on progress toward resolving the two nations’ trade war.

“The cancellation came only about an hour after President Donald Trump said he wasn’t interested in ‘a partial deal’ with China based on Beijing increasing its purchases of U.S. agricultural products. U.S. and Chinese officials held negotiations this week and are aiming for a high-level meeting around Oct. 10.”

In a quick change of events, China canceled a planned visit to farms in the U.S. heartland – a trip the Trump administration had touted as a building of “goodwill” https://www.bloomberg.com/news/articles/2019-09-20/montana-farm-bureau-says-china-visit-to-state-s-farms-canceled … via @MarioDParker 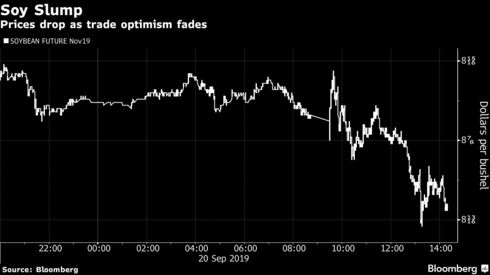 “But on Friday, the Montana Farm Bureau Federation said it was told by the Chinese embassy that the delegation ‘had an adjustment of their agenda‘ and would return to China earlier than planned. The Nebraska Department of Agriculture, which also had planned to host the delegation, confirmed their visit was canceled, too.”

Financial Times writers Demetri Sevastopulo, James Politi and Colby Smith reported on Friday that, “Mr Trump said Beijing had made some ‘very big‘ agricultural purchases this week, but stressed that he would not accept a narrow deal — which would focus on efforts to reduce the US trade deficit with China but do less to compel the country to tackle problems related to intellectual property theft and market access reforms.

‘China has been starting to buy our agricultural product,’ he said. ‘But that’s not what I’m looking for. We’re looking for the big deal, we’ve taken it to this level.’

The FT article indicated that, “On Friday a top Senate Democrat urged Mr Trump to reject any deal that did not address the bigger points of contention between the countries such as intellectual property.”

“‘My hope is that the president . . . won’t back down just for some commitment to buy a couple of shiploads of soyabeans, but that we will get something enforceable around IP theft,’ Chris Coons of Delaware told CNBC television.”

My hope is President Trump “won’t back down” from negotiations with China on trade, says Senator @ChrisCoons. “The reality is we are paying for this, this is something that is imposing a drag on the American economy.” 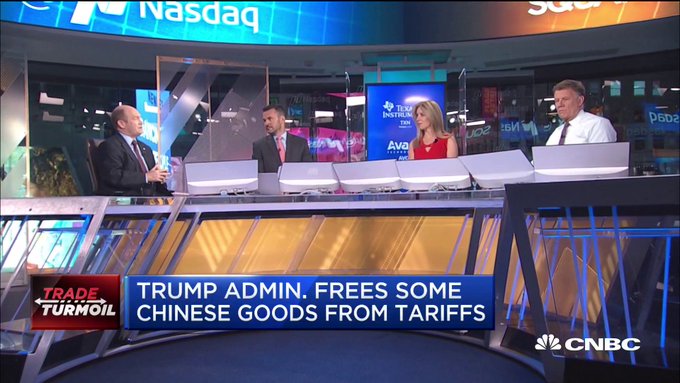 However, on Sunday, Bloomberg writers Jenny Leonard, Mike Dorning, Jordan Fabian, and Mario Parker reported that, “China’s cancellation of a planned visit to farms in the American heartland was done at the request of the U.S., people familiar with the matter said, indicating it wasn’t caused by a negative turn in the lower-level discussions held in Washington last week.

U.S. Trade Representative Robert Lighthizer’s office didn’t find out about the visit until it was set up and subsequently asked the Chinese delegation not to go, one of the people said. The Chinese were told this was because of domestic reasons, another person said.

And Reuters News reported on Sunday that, “China did not cancel planned visits to farms in the United States because of challenges in trade negotiations with the U.S., the country’s senior agricultural representative in the talks said, according to a report by state-backed media group Yicai on Sunday, who added the talks last week achieved a ‘good outcome.’”

The Reuters article pointed out that, “Last week’s trade negotiations were constructive and made thorough preparation for talks in early October, said Han Jun, the deputy director of the Office of the Central Rural Work Leading Group, at an event in Washington, D.C., according to Yicai.

“‘There was a good outcome from the negotiations in the agriculture area too. The two sides had thorough and candid communications,’ [he] said, according to Yicai.”

On Friday, Reuters writers David Lawder and Karl Plume reported that, “A U.S.-China trade deal appeared elusive on Friday after Chinese officials unexpectedly canceled a visit to farms in Montana and Nebraska as deputy trade negotiators wrapped up two days of negotiations in Washington.”

The Reuters article stated that, “The U.S. Trade Representative’s office issued a brief statement characterizing the two days as ‘productive‘ and that a principal-level trade meeting in Washington would take place in October as previously planned.

“China’s Commerce Ministry, in a brief statement, described the talks as ‘constructive‘, and said they had also had a good discussion on ‘detailed arrangements’ for the high-level talks in October.”

Friday’s article added that, “The early October meeting will include the top trade negotiators: Chinese Vice Premier Liu He, U.S. Trade Representative Robert Lighthizer and U.S. Treasury Secretary Steven Mnuchin. It is expected to determine whether the world’s two largest economies are starting to chart a path out of their 14-month trade war or headed for new and higher tariffs on each others’ goods.”