Diminished Optimism in the Corn Belt

Flooding and gloomy price prospects for corn and soybeans are diminishing optimism in the Corn Belt as spring planting nears.  Recent news articles continue to discuss the ongoing negative impacts of Midwestern floods on an already battered farm economy.  Meanwhile, corn and soybean prices fell on Friday after the U.S. Department of Agriculture released data relating to prospective planting intentions and grain stocks.

Wall Street Journal writer Jesse Newman reported late last week that, “Severe flooding in the Midwest is damaging fields, disrupting shipments and dealing a costly blow to growers and agribusinesses as a downturn in the farm economy stretches into a sixth year.

“Swollen rivers in Nebraska, Iowa and other states after months of heavy snow and rain have swamped grain bins and washed away cattle. The deluge has impeded crop shipments for U.S. grain traders and inundated roads and rail lines that companies including Hormel Foods Corp. and Tyson Foods Inc. use to move meat.”

The Journal article noted that, “The deferred corn sales will tighten [Dan Wesely’s] budget as he and other U.S. farmers navigate the steepest agricultural slump since the 1980s. Low prices for corn, soybeans and other farm goods have pressured farm incomes in recent years and boosted farm debt to the highest level in decades.

“Bankruptcy filings are rising throughout much of the Midwest, and ongoing trade disputes with big customers for U.S. agricultural commodities like China are deepening anxiety across the Farm Belt.” 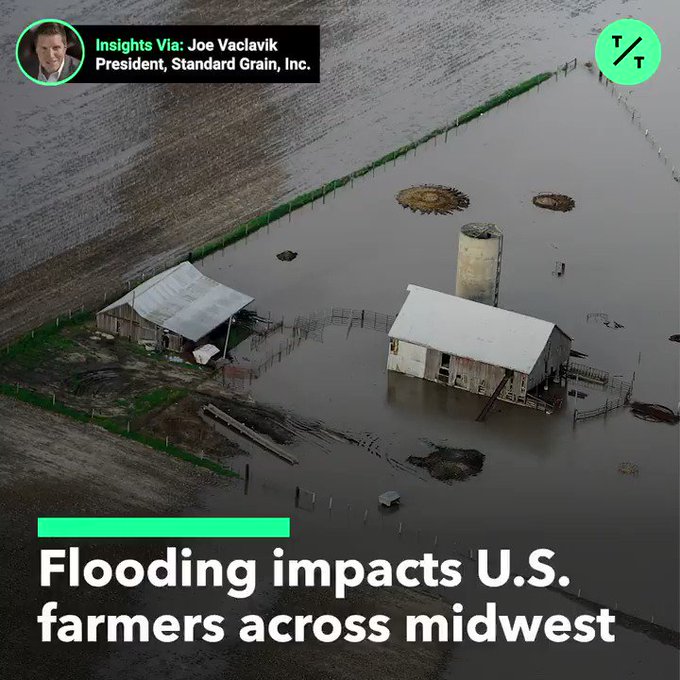 On Thursday, Bloomberg writers Shruti Singh, Michael Hirtzer, and Isis Almeida reported that, “For American farmers already struggling to navigate the U.S.-China trade war, optimism for the spring planting season is washing away.

“Floods from the Mississippi Delta to the Dakotas have inundated roads and submerged fields just as Midwestern farmers should be preparing the soil to sow this year’s seeds. If land is inaccessible much longer, growers will be forced to shift their planting decisions — likely leading to more soybeans, the crop hit hardest by a drop in Chinese demand.”

The Bloomberg writers explained that, “The timing could hardly be worse for farmers who had been trying to figure out which mix of crops would yield the most profit as trade tensions drag on. President Donald Trump’s tit-for-tat tariffs with China, historically one of the biggest customers for U.S. agricultural goods, has roiled a market already depressed by years of ballooning supplies. Growers, waiting for sales to recover, are sitting on record inventories of soybeans packed away in silos and grain bags.”

And Reuters writer Andrew Hay reported last week that, “Slammed by a trade war and low commodity prices, Midwest family farms have been in the red and in decline for the last five years. The number of U.S farms fell by 100,000 between 2010 and 2017, according to U.S. Department of Agriculture (USDA) data. 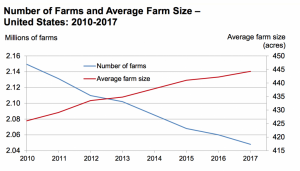 Donnelle Eller reported on the front page of Saturday’s Des Moines Register that, “Little if any of the grain destroyed in record flooding this month is insured, said Iowa Agriculture Secretary Mike Naig, who along with USDA Under Secretary Bill Northey, met with farmers struggling with flooding in Hamburg Thursday.”

“Farmers asked if the stored grain could be covered through a $13.5 billion federal disaster bill. Lawmakers are working to bring spring flooding into the disaster assistance for 2018 hurricanes and wildfires…[Sen. Chuck Grassley (R, Iowa)] said he and congressional leaders will try to cover the stored grain. But the timing might not work, given how long it will take to assess flood damage, which is likely to continue in the months ahead.

“Families hit by disasters in California, Georgia and elsewhere last year are still waiting for help, he said. Lawmakers aren’t going to hold the bill ‘while we decide how much loss we have here,’ Grassley said.”

Reuters writers P.J. Huffstutter and Humeyra Pamuk reported on Friday that, “The U.S. Department of Agriculture (USDA) forecast on Friday farmers would increase corn plantings by 4.1 percent from last year, but the estimate did not account for the flooding.

Nearly 1.1 million acres of cropland and more than 84,000 acres of pastureland in the U.S. Midwest had flood water on it for at least seven days between March 8 and March 21, according to a preliminary analysis of government and satellite data by New-York based Gro Intelligence at the request of Reuters. The extent of the flooding had previously not been made public.

“The flooded acreage represents less than 1 percent of U.S. land used to grow corn, soybeans, wheat, rice, cotton, sorghum and barley. In 2018, some 240 million total acres of these crops were planted in the United States, USDA data shows.” 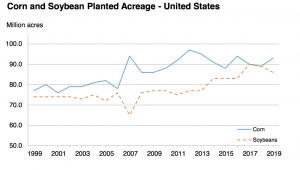 And Reuters writer Mark Weinraub reported on Friday that, “Massive supplies of both U.S. corn and soybeans remained in storage bins around the country ahead of spring planting, U.S. Agriculture Department (USDA) data released on Friday showed.”

The article pointed out that, “In its quarterly stocks report, USDA pegged domestic corn supplies as of March 1 at 8.605 billion bushels, down from 8.892 billion a year ago but still the third-biggest on record.” 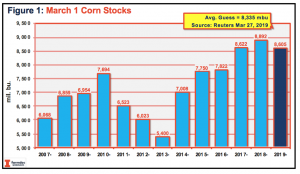 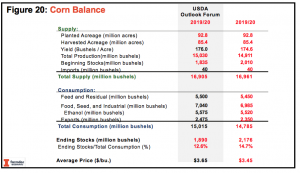 “Corn prices plunged after the report was released, with the most-active Chicago Board of Trade corn futures contract dropping 4.6 percent to a four-month low. It was the biggest daily price drop for corn in percentage terms since July 2016.”

Mr. Weinraub also states that, “Soybean stocks of 2.716 billion bushels were the largest on record for the time period and also were above market forecasts for 2.683 billion. Wheat stocks stood at 1.591 billion bushels, the second-biggest in 31 years.” 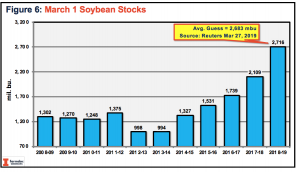 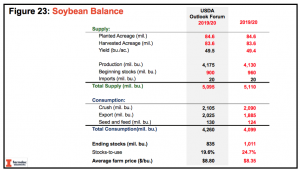 “Soybeans dropped to a three-month low while wheat futures hit their lowest in two weeks,” the Reuters article said.