“The White House blessed it anyway.

“The back and forth is revealed in newly released documents from a White House review of the Environmental Protection Agency’s biofuel proposal before its public release Oct. 15.”

2 wks ago ACE resisted the temptation to sing the praises of the WH ‘deal’ because it was short on details & dependent on a new EPA rulemaking. Simply put, EPA’s proposal fails to live up to the hype. ACE statement here http://ow.ly/tXVg50wM922 ’s-supplemental-proposal-to-2020-rvo/ 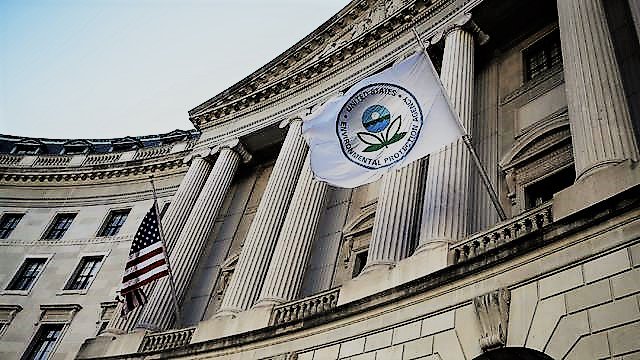 Ms. Dlouhy explained that, “The documents, uploaded to a government regulatory docket [on October 21st], show the U.S. Department of Agriculture initially argued the plan was inconsistent with an earlier White House promise to ensure ‘more than 15 billion gallons’ of conventional biofuel, such as ethanol, are required to be blended into the nation’s fuel supply beginning in 2020.
}

“The documents shed light on a last-minute fight between the EPA and the USDA that briefly delayed the proposal’s release. Ultimately, the EPA’s approach prevailed, with both agencies signing off on the measure and the White House Office of Information and Regulatory Affairs authorizing its release, according to a senior administration official.” 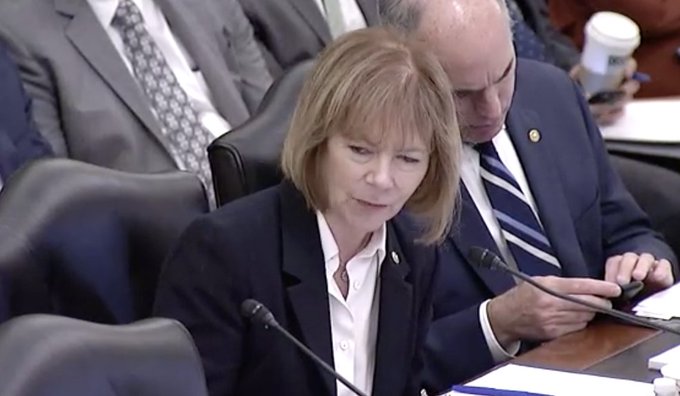 “At issue is an Oct. 1 agreement to raise biofuel-blending requirements and offset EPA waivers exempting some small refineries from the mandates. When the administration outlined the deal on Oct. 4, the EPA said it would seek public comment on ensuring more than 15 billion gallons of conventional ethanol are blended into the nation’s fuel supply beginning in 2020.

“However, the EPA’s formal proposal to codify the deal, released a week and a half later, raises the possibility that planned increases in biofuel-blending requirements will not be high enough to offset refinery waivers, effectively undercutting the 15-billion-gallon target. The reason is that EPA based its adjustment on a lower possible total — Energy Department recommendations for waivers that were sometimes disregarded — instead of higher levels EPA actually granted in recent years. The EPA also signaled it would shift practice to more closely abide by those Energy Department recommendations going forward.” 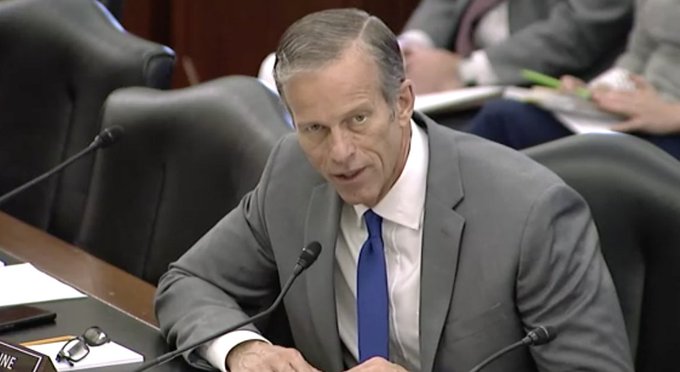 Likewise, DTN writer Todd Neeley reported last week that, “The timeline over the past three weeks has been filled with different groups, including White House officials, disputing EPA’s latest biofuels plan and its likely outcomes. The proposed rule does not include language regarding a three-year rolling average that was initially detailed. EPA’s plan also would account for only about half of the annual volume of biofuel gallons EPA has waived.

“The Trump administration initially announced a biofuels deal on Oct. 4 that would include accounting for small-refinery exemptions based on a three-year rolling average of about 4 billion gallons waived between 2016 and 2018, or about 1.35 billion gallons annually.

“The actual EPA proposal released Oct. 15 showed the agency would account for a much smaller volume of 770 million gallons based on a U.S. Department of Energy analysis.” 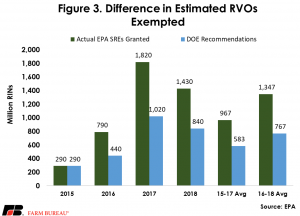 “The proposed adjustments in the notice designate that this three-year rolling average will be based on the relief recommended by the Department of Energy, not on actual exemptions granted. This is a key point of contention for the industry as there is often a disconnect between how many gallons are recommended by DOE to exempt through full or partial exemptions and what the actual exemptions end up being. Simply put, DOE recommended a lower number of RVOs be exempted by EPA, EPA disregarded that and exempted a larger number of RVOs. EPA then proposed to account for the actual lost gallons by using the lower DOE numbers it had already rejected, resulting in a certain creative irony.” (“EPA’s Small Refinery Waiver Proposal Is an Unbalanced Approach for Agriculture,” American Farm Bureau Federation (October 21, 2019- https://bit.ly/32Tat5w).

Mr. Neeley added that, “In documents posted to regulations.gov by EPA on [October 21], email exchanges between the agency and the White House Office of Management and Budget, however, show OMB interagency reviewers did not agree with the EPA proposal as it relates to the White House deal.”

‘I trust the president of the United States,’ Grassley, an Iowa Republican, told reporters. ‘I don’t trust EPA.’

“‘There’s a big public relations problem with the people in the ethanol industry, corn farmers and this senator about EPA keeping its word (after) playing footsie with big oil companies,’ he said.”

#NEW @EPAAWheeler responds to backlash from Midwest lawmakers & #ethanol producers over new #biofuel rule.
“It will get us to the 15 billion gallons of ethanol that the president promised…”- Wheeler
-“And that’s a promise you can guarantee?”
-“Yes.”- Wheeler#NexstarDC 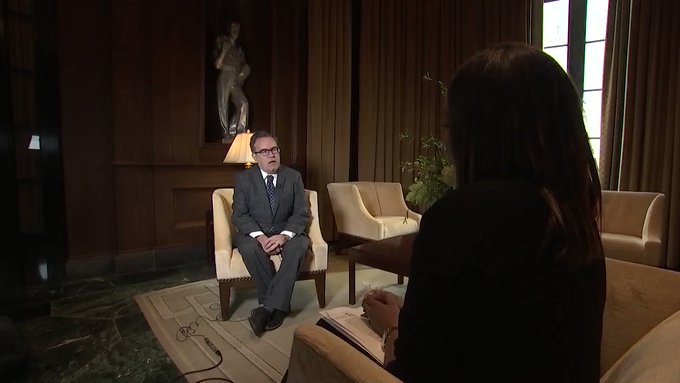 The Register article pointed out that, “Farmers, agriculture groups and renewable fuels leaders said last week they were outraged that the EPA’s proposal didn’t reflect what the administration outlined earlier in the month. The EPA said it plans to use a three-year average to account for the reduction in demand for ethanol and biodiesel resulting from the waivers, using the number of gallons that the U.S. Department of Energy recommends waiving.”

Also last week, Jerry Hagstrom reported at DTN that, “At a Cabinet meeting on [October 21st], Agriculture Secretary Sonny Perdue defended the Environmental Protection Agency’s announcement last week about how it will account for the small refinery waivers under the Renewable Fuel Standard, while President Donald Trump talked about China trade and farmers.”

The DTN article stated that, “At Trump’s request that he ‘talk about ethanol for our farmers for a couple of minutes,’ Perdue said, ‘You’ve done a couple of things, Mr. President. You’ve – you, first of all, committed to and fulfilled your promise of making the E15 year-round. That’s what’s really needed to build infrastructure. That’s a 50% increase in domestic usage there, which will happen. Good for the economy, good for the air, and good for the ag farmers in that way.

‘You’ve also balanced up the smaller refinery waivers with the farmers and RFS,’ Perdue added. ‘And once they fully understand what you’ve done here, they’ll be fine, and – as they see it implemented.’

On Wednesday, Reuters writer Stephanie Kelly reported that, “Biofuels groups have filed a petition in the U.S. court of appeals in Washington against the Environmental Protection Agency, challenging the agency’s process for granting refineries exemptions to the nation’s biofuel blending mandates, the groups said Wednesday. 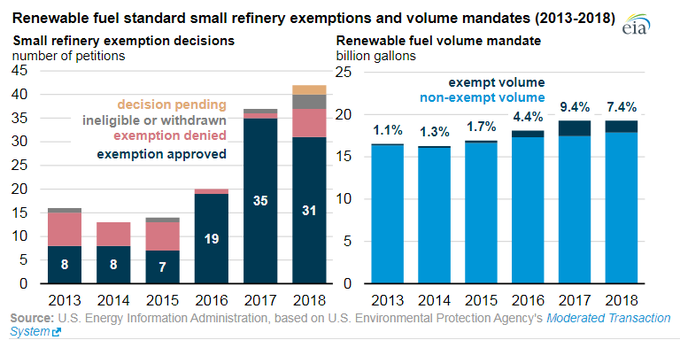 “The petition, filed by groups such as the Renewable Fuels Association, the American Coalition for Ethanol, and Growth Energy, challenges the EPA’s process for granting waivers to 31 oil refineries for 2018. The biofuels industry has criticized the Trump administration for expanding the number of waivers granted in recent years, claiming the exemptions undercut demand for fuels such as corn-based ethanol.”

The expansion of SREs by the EPA goes against the intent of the RFS & their recent announcement to try to resolve this issue does more harm than good for Illinois producers. That’s why I joined my colleagues in urging the EPA to fix their decision & keep their promise to farmers. 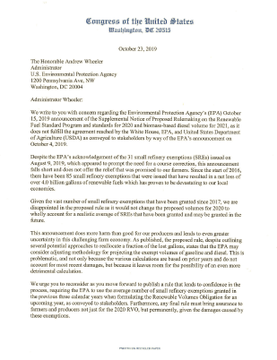 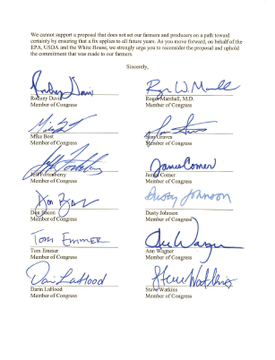 On Thursday, Stephen Gruber-Miller reported at The Des Moines Register Online that, “U.S. Sen. Joni Ernst said she’s ready to call for the resignation of the U.S. Environmental Protection Agency’s chief if the agency does not uphold an agreement restoring demand for ethanol under the Renewable Fuel Standard.

“‘If we get to a point where the EPA is not following through on what the president has directed them to do then we will have to hold them accountable,’ Ernst, a Republican, said Thursday on a call with Iowa reporters. ‘And I, at that point if we don’t see that result, that 15 billion gallons, then I’m ready to call for the resignation of Andrew Wheeler. Let’s make sure that this gets done. And if not, we’re going back to the president and saying, ‘Andrew Wheeler is the one that is not following through with your commitment to America’s farmers. You need to get rid of him.’”

“Under the Renewable Fuel Standard — a federal law — 15 billion gallons of ethanol and biodiesel are supposed to be blended into the nation’s fuel supply annually. The Trump administration issued several waivers to oil refineries, letting them off the hook for part of that total. Industry officials say the exemptions have killed demand for more than a billion bushels of corn used for ethanol.”