Reuters writers Chris Prentice and Stephanie Kelly reported late last week that, “U.S. President Donald Trump is expected to meet with Department of Agriculture and Environmental Protection Agency officials late  Thursday to consider a plan that would include boosting biofuels requirements for 2020 by 1 billion gallons, according to two sources familiar with the discussions.

“Trump has promised to deliver a ‘giant package’ to U.S. farmers related to ethanol, in response to ire from U.S. farmers and biofuels advocates over a large number of exemptions regulators have given to oil refineries to free them of requirements to blend biofuels.”

The Reuters writers explained that,

“That increase would help address ‘excess waivers,’ which have also harmed biodiesel and soy farmers, the document said.”

Also late last week, Bloomberg writers Jennifer A Dlouhy and Mario Parker reported that, “Top administration officials have developed plans to give a 5% boost to U.S. renewable fuel-blending quotas in 2020, as President Donald Trump seeks to temper farm-state criticism he has undermined U.S. mandates compelling the use of corn-based ethanol and soybean-based biodiesel.

Know this @EPA and @USDA: the only good deal for Iowa farmers is one that upholds the intent of the RFS.

“Representatives of the White House, Agriculture Department and Environmental Protection Agency have been honing final details of an initiative to encourage U.S. biofuel demand for weeks, since developing a broad framework for action on Aug. 22. Details of the drafted initiative were described in a document obtained by Bloomberg News and people familiar with the deliberations who asked not to be named before a formal announcement.”

Dlouhy and Parker pointed out that,

The Reuters article stated that, “The proposed plan would include an increase to biofuels requirements for 2020 of 1 billion gallons (3.8 billion liters), sources said.

“The plan already faced backlash during a conference call the USDA held early Friday with biofuels advocates to detail plans, sources said. The agricultural industry wants the administration to force larger refineries to make up for the exempted gallons through a process called ‘reallocation,’ but it has not committed to that yet, the sources said.”

And Bloomberg writers Mario Parker and Jennifer A Dlouhy reported on Friday that,

President Donald Trump and top administration officials were unable Friday to finalize a plan for aiding biofuel — and quelling corn-belt criticism — after agricultural groups and farm-state lawmakers said a compromise under consideration would only stoke more anger.

“Biofuel interests and their political allies warned the White House before Friday’s meeting they were disappointed with the administration’s drafted plan, which would not rescind recently issued refinery waivers and would only begin taking steps to account for those exemptions in 2021 blending quotas. They had asked the administration to formally offset refinery waivers sooner by factoring expected exemptions into 2020 blending requirements,” the Bloomberg article said. 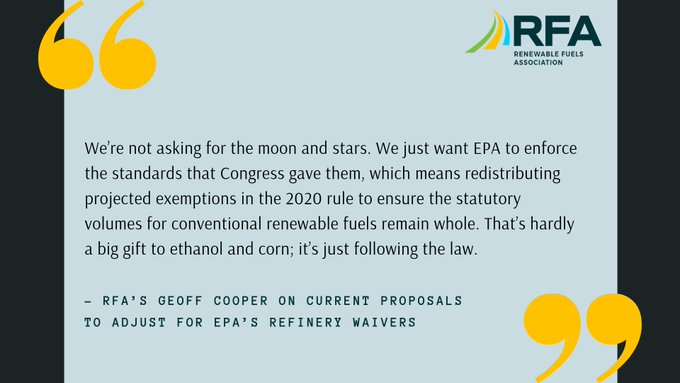 With respect to additional political background on the ongoing biofuel waiver issue, Reuters writers Humeyra Pamuk and Jarrett Renshaw on Friday that, “At a closed-door meeting at the White House on Aug. 19, President Donald Trump looked increasingly alarmed as his top envoy to China delivered evidence of rising Farm Belt frustration over his biofuel policy along with a stark warning: You’ve got a problem in Iowa.

“Terry Branstad, the former Iowa governor and now U.S. ambassador to China, told Trump that while farmers may have remained loyal to him despite the economic pain caused by the more than year-long trade war with China, they would not stomach policies favoring the oil industry at their expense, according to four people familiar with the substance of the meeting.

“The administration, he explained, was undermining Trump’s support in the battleground of Iowa and Wisconsin, by freeing too many oil refineries from obligations to add corn-based ethanol to their fuel, according to the sources, who requested anonymity because they are not authorized to discuss internal deliberations.”

As the second largest producer of ethanol, Nebraska farmers depend on a strongly enforced RFS program. Congress must hold the administration accountable. Our farmers deserve better. https://twitter.com/firefighter89/status/1169984745859616770 …

One Congressman is speaking up on the EPA https://youtu.be/al-JsH81toI  @RepDonBacon

The article noted that, “At the near two-hour meeting that also involved Trump’s top security and economy advisers, Branstad showed a map of counties that had flipped in Trump’s favor in 2016 but were now considered at risk in the November 2020 election. Branstad also listed quotes from Democratic presidential candidates assailing his biofuel policy as a betrayal of corn farmers, and headlines about ethanol plants shutting down across the Midwest, the sources said.”

Meanwhile, Mike Hughlett reported on the front page of Saturday’s Minneapolis Star Tribune that, “The Corn Plus ethanol plant in southern Minnesota this week became a casualty of increasing economic duress in the biofuel industry in the state and across the Midwest.

“Corn Plus, a farmer-owned co-op in Winnebago, suspended operations and began mothballing its plant, which had been losing about $100,000 a week.” 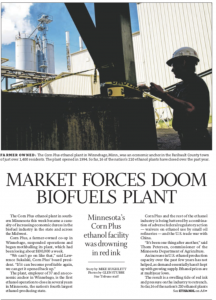 The Star Tribune article indicated that, “Corn Plus and the rest of the ethanol industry is being battered by a combination of adverse federal regulatory action — waivers on ethanol use by small oil refineries — and the U.S. trade war with China.” 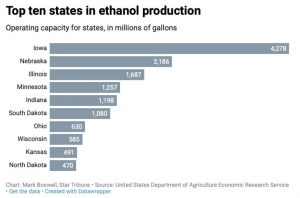 Saturday’s article pointed out that, “The ethanol industry consumes about one-third of the state’s corn crop. Lost ethanol production just adds to the strain Minnesota farmers are already feeling. Prices for corn and soybeans — many farmers grow both — are depressed. And bad weather this spring led to late planting, raising the risk of reduced crop yields.

“The Corn Plus plant shows the problem in a microcosm. The plant took in about 40 semitrailer-truckloads of corn a day. Now, the plant’s roughly 600 farmer-members will be looking for other buyers in a weak market.”