A news release yesterday from the Food and Agricultural Policy Research Institute (FAPRI) at the University of Missouri indicated that, “Pressure on farm finances appears likely to continue according to the latest analysis of national and global agricultural trends from the University of Missouri. While the analysis shows a projected net farm income increase in 2019, farm income remains below the average of 2014-17. Longer-term projections suggest little change in real net farm income over the next decade, resulting in continued increases in the farm sector’s debt-to-asset ratio.”

The release noted that, “FAPRI’s analysis shows that projected prices for U.S. soybeans and other products affected by current trade disputes remain below levels that would prevail if foreign tariffs were removed. The projected average 2019-20 prices of soybean, corn and wheat do show slight increases from 2018-19, with soybeans at $8.78 per bushel, corn at $3.81 per bushel and wheat at $5.31 per bushel. Further recovery in wheat prices could be limited by continued large global supplies, while cotton prices could fall in 2019-20 in response to increased U.S. production.

[FAPRI Director Patrick Westhoff] added that part of the reason crop prices are lower is due to recent growing conditions. He said the past six years have featured relatively solid growing conditions worldwide, leading to large crop supplies.

Before getting into additional details of the FAPRI report, recall that earlier this year USDA released its 2019 Farm Income forecast, as well as it’s 10-year projections; and USDA Chief Economist Robert C. Johansson provided a broad outlook for U.S. agriculture in late February.   Also in February, the Federal Reserve Banks of Chicago, St. Louis, Kansas City and Minneapolis each released updates regarding farmland values and agricultural credit conditions from the fourth quarter of last year.

The FAPRI baseline report stated that, “Tariffs imposed in 2018 by China and other countries have reduced U.S. exports and prices of soybeans and other products. The baseline assumes that these tariffs remain in place for the next ten years. The baseline can serve as a point of reference when examining alternative ways in which current trade disputes might be resolved.” 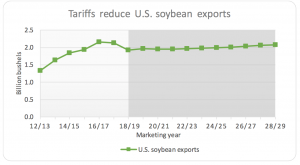 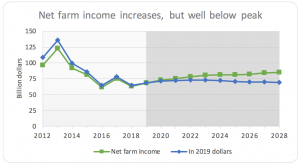 More narrowly on crop variables, the FAPRI update stated that, “The ratio of carryover stocks to an- nual use differs greatly across U.S. crops. The projected ratios for both wheat and corn decline in 2018/19 and 2019/20, as use exceeds the sum of production and imports.

Because of a large 2018 crop and reduced exports, the soybean stock-to-use ratio increases sharply in 2018/19 and takes years to return to more normal levels.

“A projected increase in production raises the upland cotton ratio in 2019/20.” 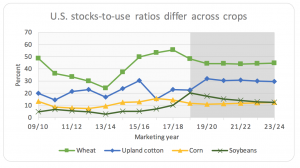 The reported explained that, “In the 2016/17 marketing year, 61 percent of U.S. exports went to China. Almost no U.S. soybeans were shipped to China in the first four months of the 2018/19 marketing year, although some sales have occurred more recently. U.S. exports to other destinations increase in 2018/19, but not enough to fully offset reduced sales to China.” 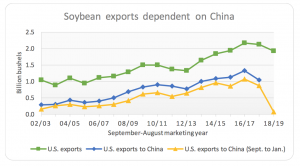 And in a closer look at prices, the report noted that, “The large increase in expected carryout stocks has weighed on soybean prices in the 2018/19 marketing year. Without a resolution to trade disputes, soybean prices could remain below $9 per bushel for a second straight year in 2019/20. Projected corn and wheat prices increase slightly in 2019/20. Average projected prices remain fairly steady in later years, but weather and other factors will cause actual prices to be much more volatile.” 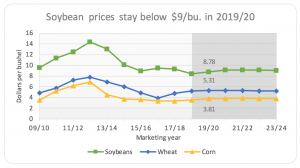 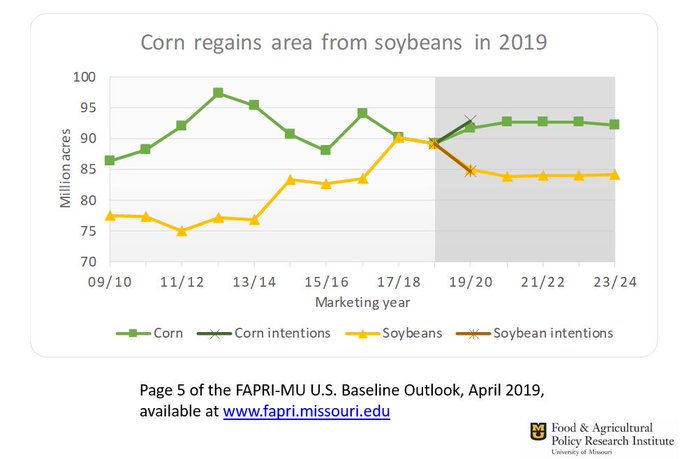 Here’s the @FAPRI_MU outlook for corn and soybean acreage, as compared to USDA’s Prospective Plantings report. Our figures were prepared in February. Flooding and other factors will affect final spring acreage. 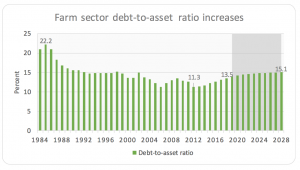 “With real farm income remaining well below the levels of 2010-2013, projected debt levels increase more rapidly than the value of farm assets. The debt-to-asset ratio increases to 15.1 percent by 2028, suggesting continued stress on farm finances.”