On Monday, the U.S. Department of Agriculture’s Economic Research Service (ERS) published an overview of the Conservation Title of the 2018 Farm Bill.  Today’s update looks at a couple key points from the ERS summary.

After highlighting several changes to specific programs in the Conservation Title, ERS turned to a broader focus on the economic implications of the new provisions.

The ERS update explained that, “For FY2019-FY2023, the CBO [Congressional Budget Office] projects mandatory spending on farm bill conservation programs that is slightly higher than projected baseline spending (spending under an extension of 2014 Farm Act programs, without modification, through 2023). For the five largest conservation programs (and predecessors), inflation-adjusted spending increased under both the 2002 and 2008 Farm Acts (2002-2013, see chart below), but was lower under the 2014 Farm Act (2014-2018). CBO projections suggest that the 2018 Act could provide slightly higher funding, on average, than under the 2014 Act. Although program funding is mandatory (does not require appropriation), spending in future years is subject to congressional review and, under past farm acts, has sometimes been reduced from specified levels.” 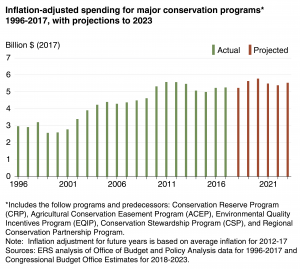 In addition, ERS stated that, “While overall conservation funding is roughly equal to baseline levels for FY2019-FY2023, the 2018 Act shifts funding among programs. The acreage enrollment cap in the Conservation Stewardship Program (CSP) is replaced with a funding cap that implies lower spending in the future. Contracts signed under the acreage-limited CSP will continue; contracts that expire before December 31, 2019 can be renewed. Going forward, the 2018 Act sets spending limits of $700 million for FY2019, increasing to $1 billion by FY2023. CSP funding was $1.32 billion in FY2018 (estimated) and was projected to be roughly $1.75 billion per year, on average, for FY2019-FY2023 according to the CBO.

Over the next several years, as spending for existing CSP contracts ramps down and spending on new contracts ramps up, CSP spending will eventually reach an overall lower level of spending commensurate with new limits.

“In contrast, the Environmental Quality Incentives Program (EQIP) funding is increased from $1.75 billion in FY2019 to $2.025 billion in FY2023, compared to an averagebaseline of $1.75 billion over FY2019-FY2023. Funding is also increased for the Agricultural Conservation Easements Program (from $250 million to $450 million annually) and the Regional Conservation Partnership Program ($100 million to $300 million annually). Conservation Reserve Program (CRP) funding is projected to decline (a total of -$189 million) over FY2019-FY2023.”

Monday’s update also pointed out that,

Changes in major conservation program funding under the 2018 Act will effectively halt the shift toward increasing the share of conservation funding for working land programs that began with the 2002 Act and continued under the 2008 and 2014 Acts. 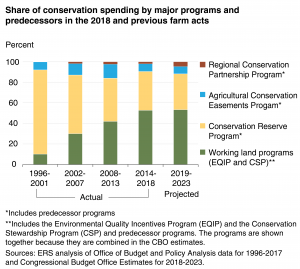