Recent news items have highlighted variables associated with the agricultural economy, including: loan repayment rates, debt levels, bankruptcy filings and agricultural production expenses.  Today’s update includes a brief recap of some of these articles and reports.

A Market Intel update last week from the Farm Bureau stated that, “Following several years of low farm income and rising debt levels, a review of Federal Deposit Insurance Corporation quarterly call report data reveals that the delinquency rates for commercial agricultural loans in both the real estate and non-real estate lending sectors are at a six-year high. 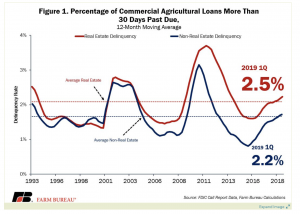 Last week’s Farm Bureau update added that, “As annual average loan delinquency rates have increased for 24 consecutive quarters, so too have farm bankruptcies over the prior 12 months. Through June 2019, and over the prior 12 months, there were a total of 535 Chapter 12 bankruptcy filings, up 13%, or 60 bankruptcies. The number of Chapter 12 filings over the previous 12 months is the highest level since 2012’s 582 filings. The increase in bankruptcy filings is a noteworthy shift given bankruptcy levels fell during calendar year 2018 compared to 2017.”

On Friday, Matt Egan reported at CNN Online that, “Banks in America’s heartland have found themselves in the crossfire of President Donald Trump’s trade war with China.

“The tit-for-tat tariffs with China ‘certainly’ have negative consequences for banks in farm states, FDIC Chairman Jelena McWilliams told CNN Business in an interview on Wednesday. McWilliams, who was nominated to her post by Trump, said the precise impact is difficult to measure.”

The CNN report indicated that, “With farmers under fire, delinquencies on agriculture loans held by commercial banks have tripled since mid-2015 to an eight-year high, according to the St. Louis Federal Reserve Bank.

“‘We may experience more delinquencies, which then become very difficult for those communities and our ag sector,’ McWilliams said.”

Meanwhile, Washington Post writer Annie Gowen reported on Saturday that, “The feed chopper was the only machine Bob Krocak ever bought new, back when he was starting out as an ambitious young dairy farmer.”

The Post article explained that, “Now, on a chilly Saturday morning, Krocak, 64, was standing next to the chopper in the parking lot of Fahey Sales Auctioneers and Appraisers, trying to sell what he had always prized. The 128 Holsteins were already gone, sold last year when his family quit the dairy business after three unprofitable years.

“Krocak needed the money to stave off bankruptcy and hold on to the land that has been in his family since 1888.

Hundreds of other farmers around the country, grappling with rising debt, dismal commodity prices and the fallout of the Trump administration’s trade wars, are facing the same fate.

“Net farm income has dropped by nearly half in the past five years, from $123 billion to $63 billion.” 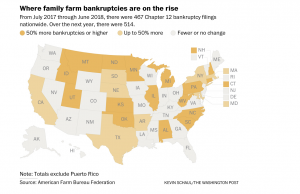 “Left Behind- Farmers fight to save their land in rural Minnesota as trade war intensifies,” by Annie Gowen. The Washington Post (August 3, 2019).

More broadly, a chart update from USDA’s Economic Research Service last month pointed out that, “Farm sector debt has reached levels near the peak levels of the late 1970s and early 1980s. 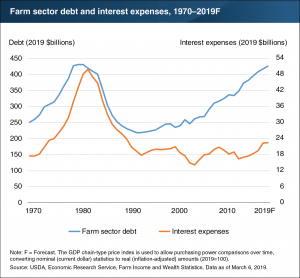 “High levels of debt increase a farm’s risk of going out of business.

“When adjusted for inflation, total farm sector debt in 2019 is forecast to be 4 percent ($4 billion) below the peak reached in 1980.”

With this background in mind, Reuters writer P.J. Huffstutter reported on Friday that,

With farm bankruptcies rising and agricultural debt loads soaring, the U.S. Senate has passed a bill that will make it easier for more farmers with larger amounts of debt to file for bankruptcy protection.

“The bipartisan bill – called the Family Farmer Relief Act of 2019 – raises the ceiling on how much debt producers who file for Chapter 12 bankruptcy can have, to $10 million from the previous $4 million.

“Chapter 12 is a part of the federal bankruptcy code that is designed for family farmers and fishermen to reorganize their debts. It was created during the 1980s farm crisis as a simple court procedure to let family farmers keep operating while working out a plan to repay lenders.”

The Reuters article noted that, “It costs far more now to run a U.S. farm than it did 30 years ago, according to U.S. Department of Agriculture data. Without this change to the law, bankruptcy experts say, farmers whose debts exceed $4.15 million are forced to use Chapter 11 bankruptcy protection, which is more costly and onerous.

“The legislation, passed by the Senate on Thursday and earlier by the U.S. House of Representatives, is headed to the White House for President Donald Trump to sign, lawmakers said on Friday.” 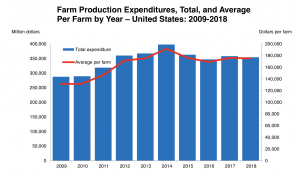