On Thursday, the U.S. Department of Agriculture released the complete set of tables prepared for the upcoming USDA Agricultural Projections to 2028 report, which is scheduled to be released on March 13th.  Recall that in November, the Department released tables containing long-term supply, use, and price projections to 2028 for major U.S. crops.  The new tables included projections for farm income and global commodity trade, which are highlighted below.

For 2019, USDA projected crop receipts to increase to $200 billion, up slightly from 2018. Direct government payments, including estimates for Market Facilitation Program payments, are projected to come down from $13 billion last year, to $10.2 billion in 2019.  Meanwhile, total expenses are set to fall by about 1.5 percent from last year.

Looking at receipts and expenses in the entirety, USDA is projecting 2019 net farm income at $77.6 billion, up from $69.2 billion last year. 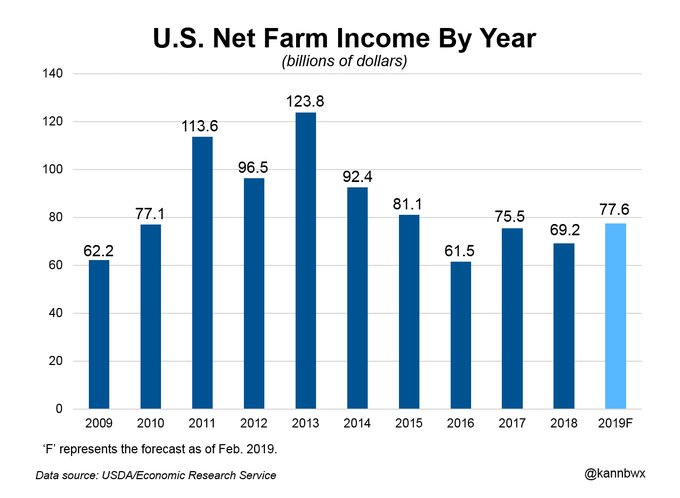 USDA sees U.S. net farm income rising to $77.6 billion in 2019, up from $69.2 billion last year, and the highest in four years. Estimates of Market Facilitation Program payments for 2018 and 2019 have been included.

Crop receipts and total expenses are projected to increase further in 2020, while net farm income is forecast to remain stable between $75.6 billion and $79.5 billion through 2028.

“That’s according to long-term projections released Thursday by the U.S. Department of Agriculture on its website. The outlook assumes China’s retaliatory tariffs stay in place. 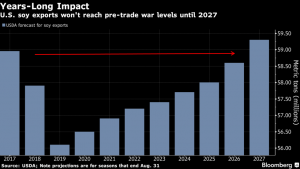 “Demand for American soy has taken a hit after China slapped tariffs on a host of U.S. farm goods as part of the nations’ trade war. At the same time, production has increased in rival producers including Brazil, the world’s largest exporter.”

‘Record production as well as trade issues are lowering our expectation for soybean exports relative to last year’s projection,’ Robert Johansson, the USDA’s chief economist, said in a telephone interview on Thursday.

The Bloomberg article added that, “‘If tariffs are lifted, the prospect would be better for higher levels of trade,’ Johansson said. ‘If we didn’t have the tariffs in place, exports would be higher and farm income would likely be higher as well.’”

With respect to global corn exports, USDA projects U.S. corn exports to fall marginally in 2019/20 to 61.6 million metric tons.  Exports from Argentina and Brazil are projected to remain stable from 2019/20 to 2021/22. 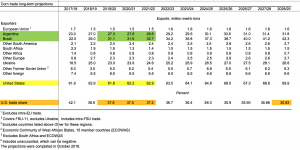 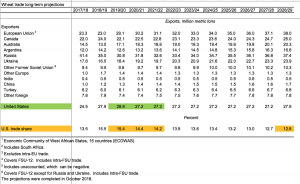 Russia, the European Union, and Canada are projected to remain strong competitors in the global wheat market.