Reuters writer Stephanie Kelly reported yesterday that, “The Trump administration, in an effort to mend fences with the powerful corn lobby, proposed a new formula on Tuesday to boost biofuels demand, but the proposal instead only provoked more consternation from the industry.

“Corn and soybean farmers have been angered by the U.S. Environmental Protection Agency’s decision to greatly expand the number of exemptions given to smaller refiners from blending biofuels into the nation’s gasoline pool. They argue the expansion undercuts demand.

“In response, the Trump administration has been negotiating for several months to find a way to boost demand for biofuels to satisfy farmers and rural voters. However, the proposed rule, issued in a supplemental notice by the EPA, was met with harsh criticism because it bases the biofuels volumes required for blending on U.S. Energy Department estimates – rather than actual exemptions.”

‘Only 11 days after President Trump’s landmark announcement, the EPA proposal reneges on the core principal of the deal,’ said Iowa Renewable Fuels Association Executive Director Monte Shaw. ‘Instead of standing by President Trump’s transparent and accountable deal, EPA is proposing to use heretofore secret DOE recommendations that EPA doesn’t have to follow.’

The Reuters article explained that, “Trump promised in early October to boost demand for fuels like ethanol. During the negotiations, it appeared the biofuels industry had won a concession that would require refiners who are not exempt from the rules to blend the additional gallons of ethanol and other fuels that smaller facilities did not.

“The proposed plan would calculate the volume of biofuels U.S. refiners have to blend by using a three-year average of exempted gallons as recommended by the Department of Energy, the Environmental Protection Agency said.

“‘The supplemental notice contains a never-before-discussed proposal to estimate small refinery exemptions, with no assurance that the estimate will come close to actual exemptions,’ the National Biodiesel Board said in a statement.”

1. Just finished reading the EPA Supplemental proposal for 2020 RVOs. I have to give credit where credit is due to the influence of the oil refiners over at the EPA. After reading this over, I am officially declaring the #Grassley rule as dead.

2. The cleverness of those oil refinery lobbyists and lawyers is truly impressive. So, now we get the supplemental rule with the much ballyhooed moving average reallocation. Straightforward right? Wrong Buddy Ruff.

Agreed, if anything it gives @EPA more discretion to continue to reduce the #RVO than simply averaging what they had been doing and not change their behavior……#RFS #ethanol

Gregor Meyer reported yesterday at The Financial Times Online that, “A brief peace between the Trump administration and US grain farmers was at risk after his environmental agency published the details of a biofuels policy they had broadly praised 11 days before.

Here’s @GrowthEnergy thank you to @realDonaldTrump @ChuckGrassley @SenJoniErnst @KimReynoldsIA — some people I talk to say the thanks is a bit premature. Time will tell. https://twitter.com/farmpolicy/status/1181997646254354432 …

“The policy deals with exemptions small oil refineries may receive from a rule requiring set amounts of corn ethanol to be blended into petrol. In early October, the administration said it would compensate for any corn ethanol sales lost to the exemptions, winning cheers from the farm and ethanol lobbies.

“On Tuesday, the applause turned to dismay after the Environmental Protection Agency released more precise information in a 20-page notice. The lobbyists said it would not buttress ethanol as promised.”

The FT article pointed out that, “About 40 per cent of the US corn crop is processed into fuel ethanol, making the biofuels industry important to rural Midwestern states that are critical to President Donald Trump’s re-election chances in 2020.” 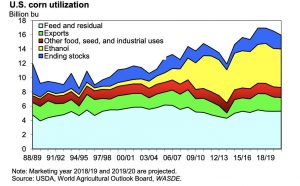 Mr. Meyer explained that, “EPA earlier said the agency would ensure that more than 15 bn gallons of corn ethanol be blended into the US fuel supply in 2020, as required by statute.

Tuesday’s notice said the agency would offset exemptions by applying any lost volumes to other fuel companies, but that it would calculate the relief based on a three-year average of past exemptions that had been recommended by the US Department of Energy.

Writing yesterday at The Hill Online, Rebecca Beitsch reported that, “The Environmental Protection Agency (EPA) announced earlier this month that it would require other larger refineries to add those exempted gallons into their fuels. But the formula unveiled by the agency Tuesday would require those refineries to add ethanol based on projections rather than the actual number of gallons exempted.”

“Ethanol producers worry there will be a major disconnect between the actual number of gallons of ethanol that are not blended into the fuel supply after the EPA doles out waivers and the number of gallons the government projects will be exempted.”

The Hill update added that, “The proposal still faces a 30-day comment period, and the EPA expects to finalize a new policy by the end of the year.” 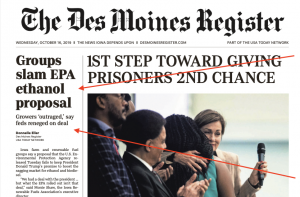 Ms. Eller indicated that, “The EPA said Tuesday it plans to use a three-year average to account for the reduction in demand for ethanol and biodiesel resulting from the waivers, using the number of gallons that the U.S. Department of Energy recommends waiving.

But the Trump administration earlier this month told farm groups it would use the average of the actual number of renewable fuel gallons that are waived, which is much larger.

“The difference between the two is significant, said Monte Shaw, executive director of the Iowa Renewable Fuels Association.

“The energy department, which provides an initial review of small refinery exemption requests, most recently recommended granting waivers for 770 million gallons of renewable fuels. The EPA, however, approved waivers for 1.4 billion gallons during its last round of exemptions.”

1. If anyone out there is interested in what a real restoration of the integrity of the RFS looks like, take a look at my #FDD from a few weeks ago. It shows how simple it would be to restore all waived gallons in three years. https://farmdocdaily.illinois.edu/2019/09/clearing-the-logjam-on-the-rfs-and-sres-a-simple-proposal.html …

Clearing the Logjam on the RFS and SREs: A Simple Proposal

Implementation of the Renewable Fuel Standard (RFS) in the U.S. has been controversial from the start. The latest controversy revolves around a seemingly obscure provision of the RFS that allows…

By relying on the Department of Energy recommendations to the EPA on whether refineries merited relief, rather than the EPA decisions on the waivers, the exemptions could still undermine quotas in the future, biofuel allies said.

“The agency is promising to finalize the measure later this year, following a public hearing on the proposal on Oct. 30, and a 30-day public comment period,” the Bloomberg article said.

Several lawmakers responded to the proposed rule on Twitter:

The @EPA’s proposed #RFS rule does not deliver what was promised. Earlier this year I introduced the #RFS Integrity Act along with Rep. Peterson to provide certainty and close the waiver loophole. Our bill looks better every day. 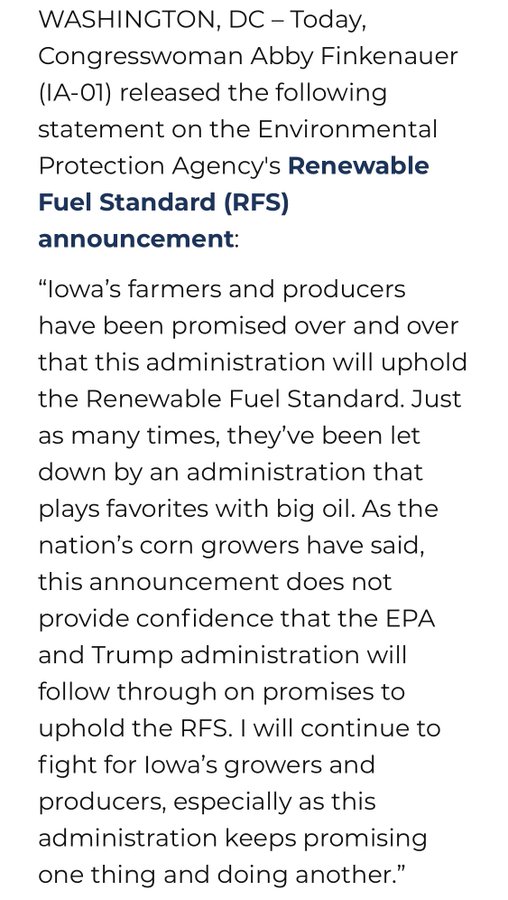 This is insulting, deeply disappointing, but unfortunately, not surprising. Time and again, this Admin comes to Iowa and pledges their support for farmers, only to go back to Washington to give hand-outs to big oil lobbyists at the expense of Iowa families and rural communities.

Today’s proposed #RFS rule from @EPA does not appear to fulfill commitments made by @RealDonaldTrump and undermines the Oct 4 announcement. I will continue working to ensure the final rule properly reallocates “small refinery” exemptions as intended.