Farmers continue to cope with difficult planting conditions that have bogged down corn planting this spring to a record slow pace.  Policy uncertainty stemming from recently announced executive branch trade assistance persists, and the House of Representatives has been stymied in its effort to pass a disaster relief bill.  Today’s update discusses these issues in more detail.

Late last week, Bloomberg writers Michael Hirtzer, Isis Almeida, and Dominic Carey reported that, “For months, traders debated which crops U.S. farmers would sow this year. That discussion is now turning to how many acres may be left unplanted as relentless rainfall sweeps the Midwest.

Rabobank is predicting an unprecedented number of unplanted acres of corn, the most widely grown American crop. A Bloomberg survey of 10 traders and analysts indicates growers could file insurance claims for about 6 million corn acres they haven’t been able to sow, almost double the record in 2013.

The article explained that, “Corn futures surged more than 20% to a three-year high over the past few weeks on fears farmers wouldn’t be able to get seeds in the ground ahead of crop-insurance deadlines. So-called prevented plant claims reached 3.6 million acres in 2013, according to the U.S. Department of Agriculture’s Farm Service Agency.” 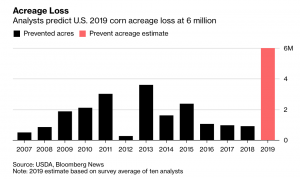 “Corn That Won’t Get Planted This Year Could Shatter All U.S. Records,” by Michael Hirtzer, Isis Almeida, and Dominic Carey. Bloomberg News (May 30, 2019).

The Bloomberg writers also noted that, “Field conditions deteriorated over the past few weeks, indicating significant corn acreage loss was a risk, according to Gro Intelligence, a New York-based analysis firm that uses satellites among other data sources. Areas with the biggest risk of acreage loss were in central Illinois, Indiana and Ohio, and the region around the borders of South Dakota, Minnesota, Iowa, and Nebraska.” 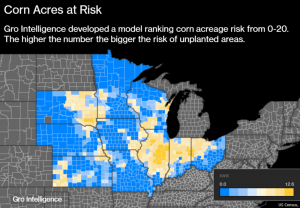 “Corn That Won’t Get Planted This Year Could Shatter All U.S. Records,” by Michael Hirtzer, Isis Almeida, and Dominic Carey. Bloomberg News (May 30, 2019).

Washington Post writer Katie Mettler reported on Friday that, “From the Rocky Mountains to the Ohio River Valley, millions of Midwesterners have endured unremitting rainfall, hundreds of dangerous tornadoes and debilitating flooding brought on by swollen waterways that are spilling into already saturated grounds — much of it farmland.”

The Post article indicated that, “The next hurdle farmers face is what to do about crop insurance. Each state has deadlines for full coverage, meaning farmers must have their crops in the ground by a certain date to qualify for assistance. Corn comes first, then soybeans. Some of those deadlines have already passed or are fast approaching.”

There has never been a spring planting season like this one. Rivers topped their banks. Levees were breached. Fields filled with water and mud. And it kept raining.

“‘You hear words like biblical, unprecedented,’ said Sherman Newlin, a corn and soybean farmer in Illinois. ‘That’s all true.’”

The Bloomberg article added that, “In Illinois, Newlin, whose farm is about a four-hour drive south of Chicago, said he has been rained out most days since he started planting on May 17. He did manage to sow about 60% of the 1,000 acres where he wanted to put down corn, but standing water and muddy conditions in those fields likely will drag down yields.”

And John Reinan reported on the front page of Sunday’s Minneapolis Star Tribune that, “Minnesota is in a historic state of sogginess after one of the coldest and wettest springs ever.” 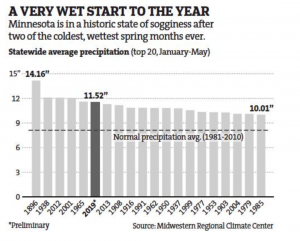 “Minnesota is in a soggy state after a historically wet spring,” by John Reinan. The Minneapolis Star Tribune (June 2, 2019).

Sunday’s article noted that, “With so much cold and rain this spring, some farmers, particularly in southwestern Minnesota, are debating whether to even plant a crop this year.

“[Tom Hoverstad, a scientist with the University of Minnesota Extension in Waseca] said roughly 15% of the corn crop in his part of the state has already been lost due to delayed planting caused by the saturated soil. And for every additional day of delay, a farmer can expect to lose about 2 ½ bushels of yield per acre at harvest time.

“Many farmers may ultimately decide not to plant corn this year and instead take the payoff from their planting insurance, Hoverstad said.”

Des Moines Register writer Donnelle Eller reported late last week that, “With the planting window closing, farmers must decide whether to push ahead with a corn crop and face diminished yields, switch those acres to potentially money-losing soybeans, or decide against planting a crop at all.

Ms. Eller explained that, “Ag Secretary Sonny Perdue said trade assistance would be provided only on acres that have been planted.

“That appears to close the door on farmers who have been inundated by rain.

“‘In order to qualify for trade aid, I have to plant a crop. But in many cases, Mother Nature isn’t allowing me to,’ said Chad Hart, an Iowa State University ag economist.

“‘It really throws a monkey wrench in what a farmer should do,’ Hart said. ‘It adds to the financial stress that farmers are feeling.’”

“Let’s talk about another key issue now, the market facilitation program payments,” Mr. Adams said.  “I know you raised questions about the timing of the announcement of them, as many others have. And now the issue is coming up, should prevent plant acres, which are going to be many, should they be part of this program. And now Secretary Perdue says he’s thinking about it. What are your thoughts on that? Should prevent plant be part of the package?”

Chairman Peterson stated: “Well, I’ve been talking to the Department, and talking to [Secretary of Agriculture Sonny Perdue], and [Deputy Secretary of Agriculture Stephen Censky]and [Under Secretary for Farm Production and Conservation Bill Northey] about this, and my concern is that the track they were on, in my opinion, was actually going to affect planting a lot more than, you know, if they’d have done a program like last year, because of this preventative planting situation. And, you know, the weather in the south part of my district, I was down there yesterday, some of those guys are not going to get the crop in at all, I don’t think.

“And so the way they’ve got this thing, you know, was heading, they were saying that it had to be planted acres. And I thought it was pretty firm, and I talked to [Under Secretary Northey] on Wednesday afternoon. That was the one thing that he was pretty firm about, that they were going to do this on planted acres. And one of the reasons he cited was that the CCC, the authorities within the CCC, I thought he said that their lawyers thought that they had to be tied to planted acres in order for them to be able to take the money out of the CCC.

“Now having said all of that, given the situation that we’re in and the dilemma farmers are in, even though it doesn’t make any sense in terms of paying people for trade damage; probably, if they’re going to use this new scheme they’ve got, they’re probably best off to not penalize the people for not planting and use some other formula, even though it doesn’t make any sense. But I don’t know.

So I told the farmers yesterday the one thing I was almost sure about, it’s going to be planted acres, and then this morning I found out I was wrong. So I think the message to farmers is I don’t even think the department knows at this point exactly what they’re going to do on either the market facilitation payments or on the disaster, because there is some latitude there as well.

In reference to the disaster aid measure, Chairman Peterson noted that, “There’s a provision put in that says that it’s a plus up when prevented planting in the disaster deal up to 90% if you had crop insurance, and they could pay up to 70% if you didn’t.”

Chairman Peterson added that, “Farmers don’t know what to do. And what I’m concerned about is the way this thing is heading is you’re going to have people not plant corn, and they’re going to plant soybeans, and we don’t need soybeans, and the whole thing is just going to be backwards from where we need to be.”

Christopher Flavelle reported on Friday at The New York Times Online that, “Corn prices are rising as surging floodwaters and soaking rains — combined with President Trump’s trade war with China — are making it an exceptionally difficult year for farmers facing risky choices about what crops to plant, or whether to plant at all.”

The Times article stated that, “To help farmers, the Trump administration has offered assistance payments designed to offset lost income from the trade war. However, those payments will be calculated on how many acres of crops a farmer plants this year — which means any cutbacks in planting due to floods or rain will hurt farmers even more, by reducing eligibility for the government assistance.

“And there is yet another complicating factor. Often, farmers who aren’t able to plant corn choose soybeans instead, which can be planted later in the year. But that strategy might not make sense this time around, given China’s retreat from buying America’s soybeans.

“The American Farm Bureau Federation has urged the Department of Agriculture to change the way it sets the assistance payments, according to John Newton, the group’s chief economist. The bureau wants acres that can’t be planted to count toward a farmer’s eligibility for federal assistance.”

And Associated Press writer Scott McFetridge reported on Saturday that, “Iowa farmer Jeff Jorgenson, 44, said it’s a puzzle trying to figure out how much land should remain unplanted and eligible for insurance payments, how much should be planted, how much money in federal aid will be available and whether those funding sources will be enough to cover his operating loan.