At USDA’s annual Agricultural Outlook Forum in February, USDA Chief Economist Robert C. Johansson pointed out that, “As farm income has fallen over the past few years, farm equity has also fallen, but it is only down about 5 percent from the peak in 2014, stabilized by high land values…with low commodity prices, farmers have increasingly tapped into their real estate equity to provide operating funds. Today, total debt is approaching record levels in real terms, and real estate debt has reached a record high in 2018.” 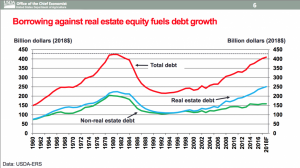 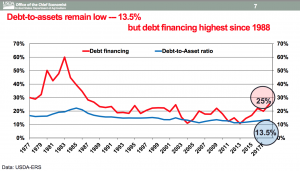 Similarly, The Financial Times reported last week that, “Some US farmers are under financial strain — partly as a result of the trade war — and [Sec.] Perdue said he was concerned that ‘working capital’ had declined among producers.

But he added that land values had held up and noted the resilience of the sector. 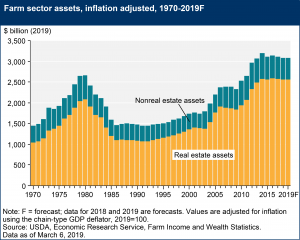 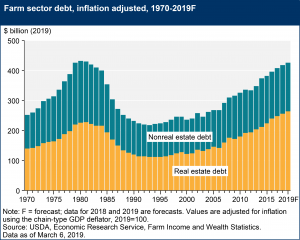 In a related item that provides additional context to the undergirding of steady of land values, Suzanne Jenkins, a senior policy analyst at the Federal Reserve Bank of St. Louis, and Nathan Kauffman, vice president at the Federal Reserve Bank of Kansas City explained recently that, “Farmland values appear to have remained relatively steady during all of this volatility. Farmland values can comprise more than 80 percent of the total value of farm assets; so, the debt-to-asset ratio, a common measure of solvency, is an important measure.”

Jenkins and Kauffman noted that, “As shown in [the figure above], the farm sector appears to remain relatively well insulated from potential solvency impacts because the debt-to-asset ratio remains relatively low by historical standards.”

With this background in mind, Daniel Grant reported on Friday at FarmWeekNow Online that, “Farmland values generally remained firm for high-quality soil across Illinois in 2018, with some softening of prices for lesser quality ground.

“But volatility in the market escalated significantly as farmers continue to deal with tightening margins and rising debt, according to members of the Illinois Society of Professional Farm Managers and Rural Appraisers (ISPFMRA).

‘High-quality land is still in demand,’ said Bruce Huber of First Illinois Ag Group in Decatur. ‘But the range in value is getting wider,’ with an average range of $5,000 per acre compared to $4,000 a year ago.

The article stated that, “Excellent quality farmland values ranged from $10,200 to $10,750 per acre in northern Illinois and $10,250 to $10,875 in central Illinois last year. There weren’t enough data samples to average excellent farmland prices in southern Illinois. However, weighted averages for good ground there stretched from $6,280 to $10,350, according to Dale Kellerman of First Illinois Ag Group in O’Fallon.”

Donnelle Eller reported earlier this month at The Des Moines Register Online that,

Iowa farmland values fell close to 3 percent over the past year, with the largest decline coming from central Iowa, a new report shows.

“The federal government’s trade bailout program, limited land and higher yields in some parts of Iowa last fall helped support farmland values, according to the Realtors Land Institute-Iowa Chapter, a group of farmland managers, brokers, appraisers and other professionals.

“The group surveys its members on the direction of farmland values every six months.”

Ms. Eller noted that, “Farmland values dropped 2.7 percent in March compared to a year earlier, the group’s report says. The statewide average was $6,794 an acre.

“Trade wars with China, Canada, Mexico and other countries weighed on farmland values, especially last fall, as did tightening cash for operations and higher interest rates.”

This marks the fifth consecutive year of downward pressure as market values have dropped approximately 20 percent since reaching a high of $3,315 in 2014. 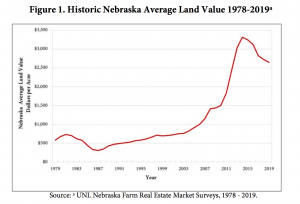 Jansen and Stokes pointed out that, “Rental rates for cropland and grazing land in 2019 reflected gradual declines across the majority of Nebraska. Many challenges exist between landlords and tenants when negotiating equitable land rental rates in 2019. As reported, many absentee or retired landowners appear to have rising property tax liabilities while trying to achieve a positive return on their assets. Agricultural operators seeking to produce commodities above break- even prices face tight margins with low prices.”