David Oppedahl, a Senior Business Economist at the Chicago Fed, explained in The AgLetter that, “For 2018, annual farmland values in the Seventh Federal Reserve District were steady overall. Yet, values for ‘good’ agricultural land in the fourth quarter of 2018 were up 1 percent from the third quarter, according to 183 survey respondents representing agricultural banks across the District. Although 75 percent of the responding agricultural bankers expected farmland values to be stable during the January through March period of 2019, nearly all of the rest expected farmland values to move down.” 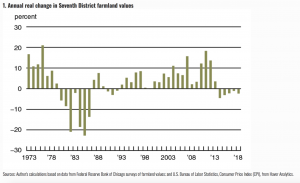 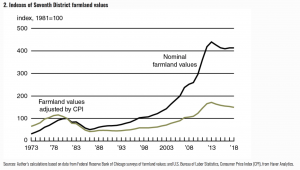 In addition, Thursday’s update noted that, “An Iowa banker remarked, ‘The soybean payment as a result of the tariffs is a big help.’ Under the Market Facilitation Program (MFP) administered by the USDA’s Farm Service Agency (FSA), soybean prices would essentially be raised by $1.65 per bushel (whereas corn prices would be bumped up only a penny per bushel). Given that 40 percent of 2018 soybean production was based in the District states, farm income in these five states should get an outsized boost from MFP payments.”

The Agricultural Finance Monitor stated on Thursday, “For the twentieth consecutive quarter, a majority of agricultural bankers in the Eighth Federal Reserve District reported that farm income had declined in the fourth quarter of 2018 compared with a year earlier. Proportionately more bankers also reported that farm household spending and capital expenditures remained below year-earlier levels in the fourth quarter. Bankers expect similar conditions to prevail for these three indicators in the first quarter of 2019.”

With respect to land values and cash rental rates, The Monitor noted that, 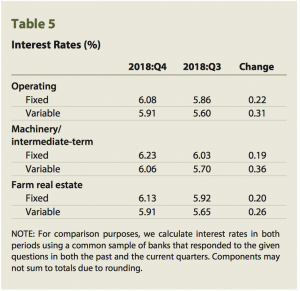 Cortney Cowley and Ty Kreitman, writing in Thursday’s Ag Credit Survey from the Kansas City Fed, noted that, “Farmland values remained stable in the fourth quarter, according to the Tenth District Survey of Agricultural Credit Conditions. Declines in the value of non-irrigated and irrigated cropland remained modest across the District, and declined only 3 percent from last year (Chart 1). On average, cropland values also declined at a slower pace in 2018 than in the previous two years.” 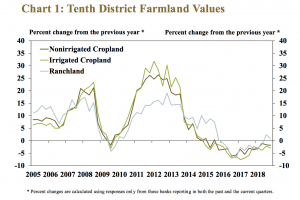 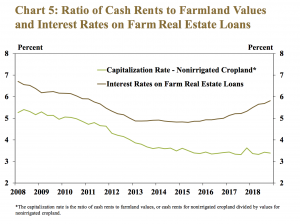 The Kansas City Fed also pointed out that,

Amid persistent stress in the agricultural economy, farm income and borrower spending continued to decline. Farm income in the fourth quarter declined for the sixth consecutive year, according to respondents throughout the Tenth District (Chart 7).

“Bankers also indicated they expected farm income to remain weak in the first quarter of 2019.” 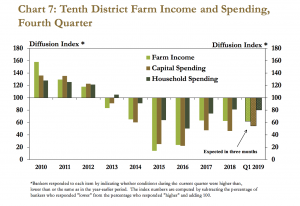 In summary, Thursday’s report noted that, “Even as risks to recent stability in farm real estate markets mounted through the end of 2018, the value of farmland continued to provide ongoing support to the farm sector and remained a key factor to monitor in 2019.”

Also last week, the Minneapolis Fed indicated in its Fourth-Quarter 2018 Agricultural Credit Conditions Survey that, “The story has become a familiar one: Farmers in most areas of the Ninth District had good growing conditions and strong yields in 2018, but low crop prices held farm incomes down and put pressure on finances.

‘We are seeing the economic stress rising significantly,’ said a rural banker in Minnesota. ‘Producers are dealing with multiple years of economic pressure, and we are seeing more operations ‘throwing in the towel.’’

“Farm incomes and capital spending continued to decrease at the end of 2018, according to lenders responding to the Minneapolis Fed’s fourth-quarter (January) agricultural credit conditions survey. Falling incomes also led to decreased loan repayment rates, while loan demand, renewals, and extensions increased. Farmland values declined slightly on average, while cash rents were more stable. The outlook for the beginning of 2019 is pessimistic, with survey respondents predicting a further declinein income and capital spending.”

The report stated that, “Given the role of strong harvests in bolstering farm incomes, some lenders expressed concerns about that luck running out. ‘A year of average yields with current commodity pricing would be very detrimental to our area’s farm operations,’ a Minnesota banker commented.”