This week, the Federal Reserve Banks of St. Louis, Kansas City and Minneapolis released updates regarding farm income, farmland values and agricultural credit conditions from the second quarter of 2019.  And earlier this year, the Federal Reserve Bank of Dallas released its Agricultural Survey for the second quarter of 2019.  Today’s update highlights core findings from the Fed reports.

The Agricultural Finance Monitor stated on Thursday, “For the twenty-second consecutive quarter, a majority of bankers who responded to the survey reported a decline in farm income compared with the same period a year ago. It was the highest proportion of bankers reporting lower income since the first quarter of 2016 when considering all observed data.”

With respect to land values and cash rental rates, The Monitor noted that,

Cortney Cowley and Ty Kreitman, writing in Thursday’s Ag Credit Survey from the Kansas City Fed, noted that, “Farm Income in the Tenth District remained weak in the second quarter, but the pace of decline slowed.” 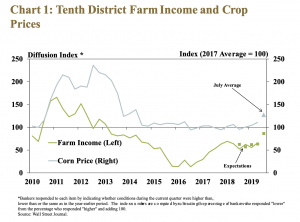 “Following a nearly 20-year low in 2016, the pace of decrease in farm income has remained relatively stable since the end of 2017,” The Survey said.  “Crop prices increased in the second quarter, and the United States Department of Agriculture announced a continuation of the Market Facilitation Program in 2019. These developments may have led to less pessimistic expectations about farm income in coming months.”

Thursday’s update stated that, “Similar to trends in farm income, the pace of decline in credit conditions also showed signs of stabilizing in the second quarter.” 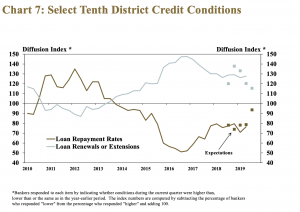 Turning to land values, Cowley and Kreitman noted that, “Farm real estate values across the District were nearly unchanged from a year ago in the second quarter. The value of all types of farmland declined modestly in Nebraska and increased slightly in all other states except the Mountain States.” 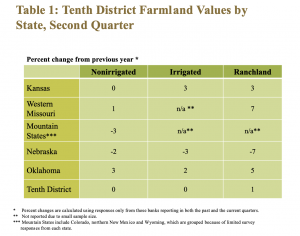 The annual change in farm real estate values was also similar to other recent quarters. The value of all types of farmland in the Tenth District has held relatively steady despite downward pressure from weak farm finances and recent increases in interest rates. Compared with the preceding period of sharp increases in the value of all types farmland, the decline since 2015 has been modest. 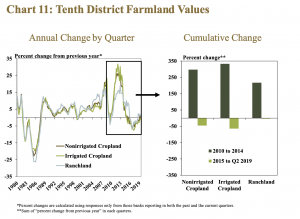 In summary, Thursday’s report stated that, “Despite some signs of continued stress, the pace of deterioration in the farm economy in the Tenth District was expected to slow in the next three months. Higher corn prices and trade relief payments likely supported less pessimistic expectations for farm income and agricultural credit conditions.”

In this week’s Agricultural Credit Conditions Survey, the Minneapolis Fed noted that, “Farm incomes fell from April through June relative to a year earlier, according to results of the second-quarter (July) agricultural credit conditions survey. Spending on capital equipment and farm household purchases also decreased. Falling incomes pushed the rate of loan repayment down slightly, while renewals and extensions increased, though a majority of lenders reported that both were flat.

Respondents noted that cropland values generally increased slightly. Although the third-quarter outlook is for continued contraction, fewer respondents predicted decreases in income, capital expenditure, and household spending over the next three months than in the past three months.

The Fed update explained that, “Consistent with surveys in recent quarters, the second-quarter results generally pointed to a moderate decrease in land values. Cash rents for agricultural land also fell slightly. The average value for nonirrigated cropland in the district decreased by 1.7 percent from a year earlier, according to survey respondents. Irrigated land and ranchland values were nearly flat, with the former decreasing and the latter increasing less than half a percent. The district average cash rent for nonirrigated land decreased by less than 1 percent from a year ago, while rents for irrigated land fell more than 3 percent.”

Earlier this year, the Federal Reserve Bank of Dallas released its Agricultural Survey for the second quarter of 2019, which stated that, “Demand for agricultural loans plummeted, with the loan demand index falling to its lowest reading in six years. Loan renewals and extensions increased, and the rate of loan repayment continued to decline. With the exception of operating loans, loan volume fell across all major categories compared with a year ago.” 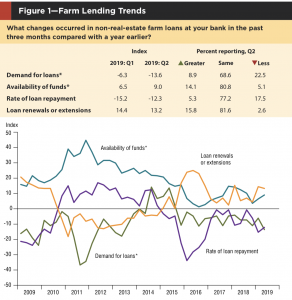