On Wednesday, the Federal Reserve Board released its January 2019 Beige Book update, a summary of commentary on current economic conditions by Federal Reserve District. The report included several observations pertaining to the U.S. agricultural economy. 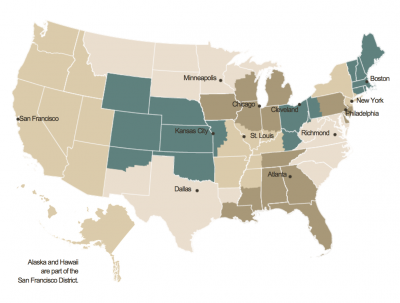 * Sixth District- Atlanta– “Agriculture conditions across the District were mixed. Recent reports showed most of the District was drought-free with the exception of parts of south Florida where there were abnormally dry to moderate drought conditions. 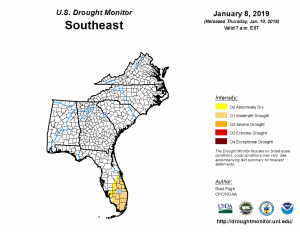 “The USDA designated some counties in Alabama, Florida, Georgia, and Mississippi as natural disaster areas due to damages and losses attributed to Hurricane Michael, Tropical Storm Gordon, and flooding. The December forecast for Florida’s orange crops was unchanged from the prior month, but up significantly from last year’s production. In mid-December, weekly cash prices for corn, cotton, and beef were up while rice, soybean, broiler, and egg prices were down on a year-over-year basis.”

* Seventh District- Chicago– “Prices for corn, soybeans, and wheat moved higher over the reporting period, supported in part by news that trade talks between the U.S. and China had resumed and that China had purchased some U.S. soybeans. A second round of payments from the Federal Government’s Market Facilitation Program also supported farm incomes (primarily for soybean producers), although payments have been disrupted by the government shutdown. 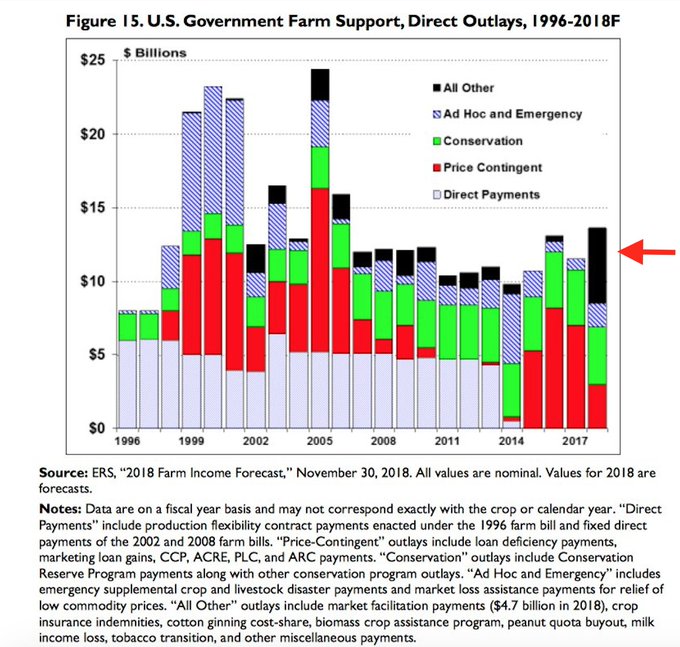 Along w/ several other categories, the “All Other” outlays depicted in this CRS chart (black shaded area) include market facilitation payments ($4.7B in ’18)

“The shutdown also slowed the release of government reports on agricultural market conditions, leading to greater uncertainty for market participants. Contacts noted that the profitability of the 2018 harvest was still unclear as a large amount of the harvest remained unsold.

Lower ethanol prices weighed on ethanol producers, and there were reports of plant closures as well as expectations of more closures in the future. 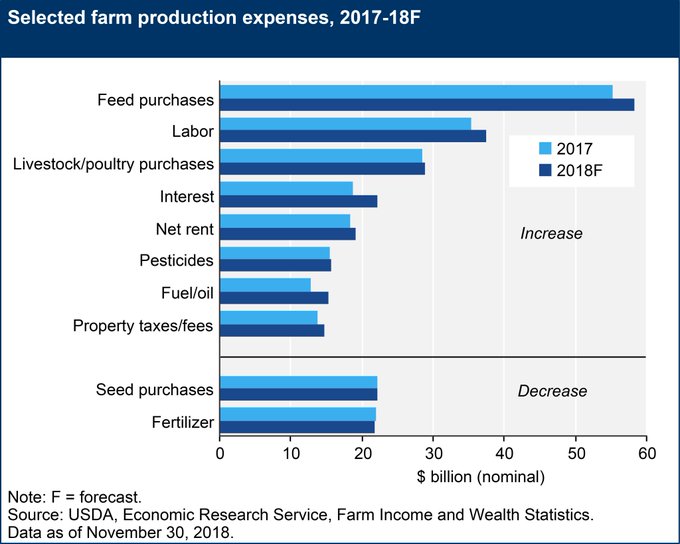 * Ninth District- Minneapolis– “Agricultural conditions in the District were stable at low levels.”

* Tenth District- Kansas City– “The Tenth District farm economy remained weak despite a slight improvement in prices of some agricultural commodities. In the crop sector, prices increased slightly from the prior period. Corn and wheat prices were slightly higher than year-ago levels, but soybean prices remained lower as uncertainty surrounding trade persisted.

“The #farm sector is in a prolonged downturn as a result of declining #agricultural prices, made worse by retaliatory #tariffs on U.S. farm products.”

“Although good yields contributed to higher 2018 corn and soybean production in Nebraska, below average yields in Missouri could put downward pressure on farm income. Cotton prices fell sharply since the prior period on expectations of lower ginning activity which, combined with lower 2018 production in Oklahoma due to poor yields, could also reduce revenues. In the livestock sector, cattle prices increased slightly compared to the previous survey period while hog prices were slightly lower.”

* Eleventh District- Dallas– “Ample soil moisture has boosted agricultural producers’ outlook for 2019, although prices for several crops remain low. The new farm bill offers farmers greater flexibility in choosing coverage options and reintroduced cotton as a covered commodity after it was removed in the 2014 farm bill.

This cotton safety net is meaningful for many cotton growers as they secure financing for the upcoming crop season.

“Conditions in the livestock sector generally remained favorable, but milk prices have fallen over the reporting period and may cause strain on dairies.”

* Twelfth District- San Francisco– “Conditions in the agriculture sector deteriorated slightly. Many contacts cited trade policy changes and the appreciation of the dollar as drivers of weaker sales in the sector. Demand from abroad for a variety of crops declined noticeably, hurting profitability for certain growers across the District. A few contacts reported higher inventory levels for crops such as soybeans and perishable fruits, while growers sought alternative markets for their products. A contact in California noted that the outlook for crop yields in the new year improved modestly after rainfall beat expectations over the reporting period.”