Five Things Everyone Should Know About A2 Milk 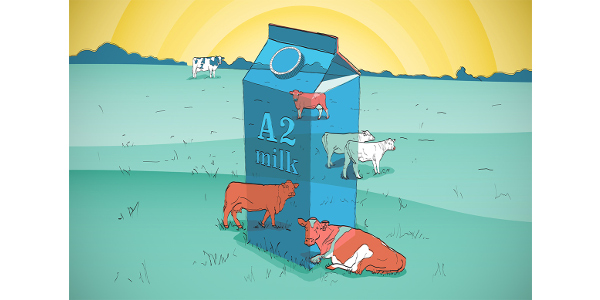 A2 milk comes from cows with a natural genetic variation that gives their milk a slightly different protein ratio than conventional milk. (Illustration by Danielle Lamberson Philipp)

1. A2 milk comes from cows with a natural genetic variation that gives their milk a slightly different protein ratio than conventional milk. All milk contains proteins, including whey and casein, and about 80% of the proteins in cow’s milk are caseins. There are four types of caseins (αs1, αs2, β, and κ), and each type has different genetic versions. The β-casein protein has two principal genetic variations — A1 β-casein and A2 β-casein — which differ in their structures by a single amino acid. Conventional milk contains a mixture of both genetic variants, while A2 milk comes from cows genetically selected to produce only A2 β-casein.

2. All cows produce at least some A2 β-casein, but certain breeds have predominantly A2 in their milk.This includes the Guernsey, Jersey, Charolais, and Limousin breeds. Other animals, such as sheep, goats, buffalo, camels, donkeys, and yaks, also produce milk that mostly contains A2 β-casein. Holstein, Friesian, Ayrshire, and British Shorthorn cows produce milk with roughly equal amounts of A1 and A2 β-casein.

3. All milk contains an amino acid sequence known as β-casomorphin-7 (BCM-7), which has been implicated in a number of negative health outcomes. However, digestive enzymes in the small intestine find it harder to derive BCM-7 from the A2 β-casein protein. In other words, drinkers of conventional cow’s milk will be exposed to more BCM-7 than drinkers of A2 milk. To suggest that their product is a healthier choice, some A2 milk companies claim that BCM-7 can worsen gastrointestinal motility, absorption, secretion, and immune function in humans.

4. There is a general lack of definitive human trials that support the various health claims made for A2 milk. Suppliers of A2 milk products mention that people who experience discomfort when drinking conventional cow’s milk may be able to drink A2 milk “without the downsides.” However, the existing scientific evidence is inconclusive. Meanwhile, researchers continue to investigate the effects of A2 milk.

5. “Designer milks” like A2 milk could be the beginning of something big for the dairy industry. Health debate aside, these new products could be a source of renewed growth and differentiation. Through advanced breeding techniques and other new technologies, farmers could produce milks with express characteristics, such as fewer allergens and specific nutrient profiles. We are already seeing this trend with the rise of milk from grass-fed cows.

Don Otter is an educational outreach specialist at the UW–Madison Center for Dairy Research (CDR). Shelby Anderson is the CDR’s communications specialist. The CDR provides education, research, and technical assistance to the dairy industry. More at cdr.wisc.edu.