A Reuters news article this week stated that, “Frustration is building across farm country at what feels like a never-ending season of bad news.”  And an update from the Federal Reserve Bank of Minneapolis recently noted that, “Farmers are dealing with a host of compounding problems.”  As spring planting in the Corn Belt approaches, today’s update looks at recent news items that shed light on the condition of the agricultural economy.

An update last week from the Federal Reserve Bank of Minneapolis (“Farmers heading to fields hoping for better days,” by Ronald A. Wirtz) stated that, “The Ninth District’s farm economy might generously be described as struggling to tread water. The blame for this is mostly low prices, which have fallen significantly from high levels generally seen from 2011 to 2013, and longer for some commodities. But it’s also only part of the story. While prices are significantly lower than they were earlier this decade, many commodity prices are above those seen in the previous decade. Corn, for example, averaged about $3.50 a bushel in 2018; it was below $2 for a period in the early 2000s.

But farmers are dealing with a host of compounding problems, including production costs that have remained stubbornly and usually high.

“For example, total costs for inputs like seed, fertilizer, pesticide, fuel, and electricity have risen by 50 percent (inflation-adjusted) since 2006 for Minnesota farmers.” 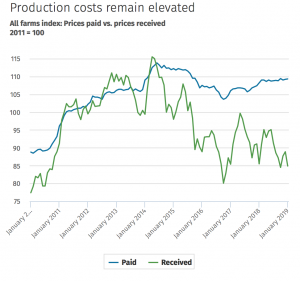 Mr. Wirtz explained that, “Farmers are also a victim of their own success. High yields in recent years have created record or near-record harvests in many commodities, and demand has not increased in kind. Tariffs have also created some trade-induced interruptions in international demand for U.S. commodities. Data from the U.S. Department of Agriculture show soybean exports to China since September are down by more than 80 percent.

“Add it all up, and many commodities are looking at high inventories.”

The Fed update noted, “Not surprisingly, another year of low prices is compounding stress among farmers. For example, chapter 12 bankruptcies in the Ninth District have increased steeply since 2014, and much more so than in the nation as a whole. 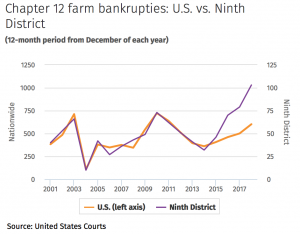 “Bankruptcies are rising in all district states, but are particularly pronounced in Wisconsin and more notably in the western half of the state.”

However, last week’s update added that, “There about 260 ag banks in the Ninth District and, while conditions have deteriorated some, most metrics suggest that ag banks are still in decent shape.”

Meanwhile, Adam Belz reported on the front page of Tuesday’s Minneapolis Star Tribune that, “The trade war and bad spring weather hit Minnesota farmers while they were already down in 2018, leaving them with their least profitable year in three decades.

“Median farm income in 2018 was $26,055, down 8 percent from 2017, capping off a half-decade run of poor years for farming after the boom of the early 2010s, according to a new report from the University of Minnesota Extension.” 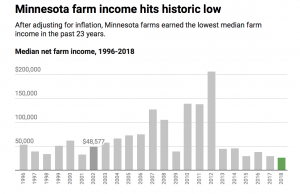 The article noted that, “Profitability varied by type of farm — beef and dairy farmers were worse off and crop farmers were better off — but overall 2018 was the worst year for farmers in Minnesota since the Farm Crisis in the early 1980s.”

Nonetheless, the Star Tribune article indicated that, “The news, however, is not all grim. The average farm’s debt-to-asset ratio increased slightly to 36 percent, but that’s still a relatively strong financial position supported by farmland that has maintained its value. Until more farmers are mired in deeper debt, fears of widespread bankruptcy may be overblown.” 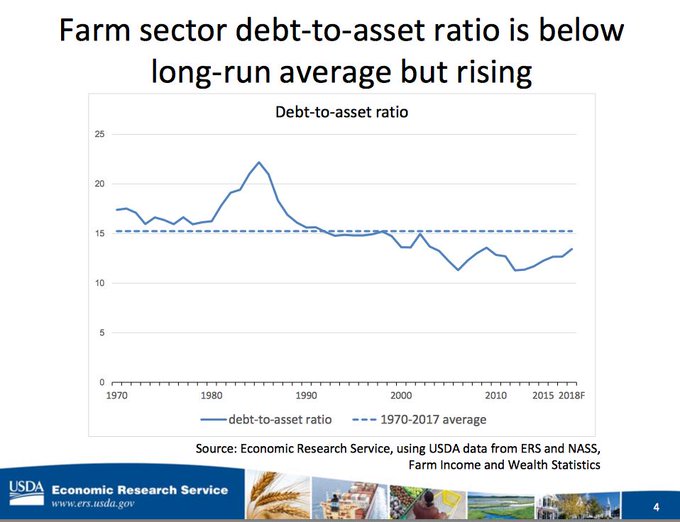 And in Sunday’s Washington Post, Annie Gowen and Frances Sellers reported that, “Before the terrible ‘bomb cyclone’ sent warm rain down on frozen ground, resulting in catastrophic flooding throughout the Midwest and displacing thousands, American farmers were already struggling after several seasons of low commodity prices and the continuing trade war with China. In towns along the overflowing Mississippi and Missouri rivers, farmers are seeing their crops — and their futures — swept away by floodwaters.” 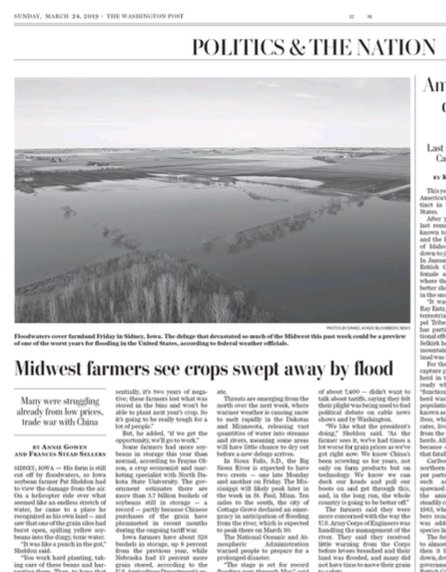 The Post article pointed out that, “In Nebraska, Gov. Pete Ricketts (R) has called the flooding ‘the most widespread destruction we have ever seen in our state’s history.’ Iowa has more than 100,000 acres of farmland still underwater. Officials from both states say the damage estimates are more than $1 billion and counting.”

On Tuesday, Reuters writers Humeyra Pamuk and P.J. Huffstutter reported that, “Frustration is building across farm country at what feels like a never-ending season of bad news.”

Pamuk and Huffstutter indicated that, “Soybean exports to China hit a four-year low in February because of the trade war. China is the biggest buyer of U.S. soybeans, which are the largest single U.S. agricultural export. A near halt in exports has hit a rural economy already struggling after years of oversupply cut farm incomes by 50 percent in the past five years.

“Debt in the agrarian economy has hit levels last seen during the U.S. farm collapse of the 1980s.” 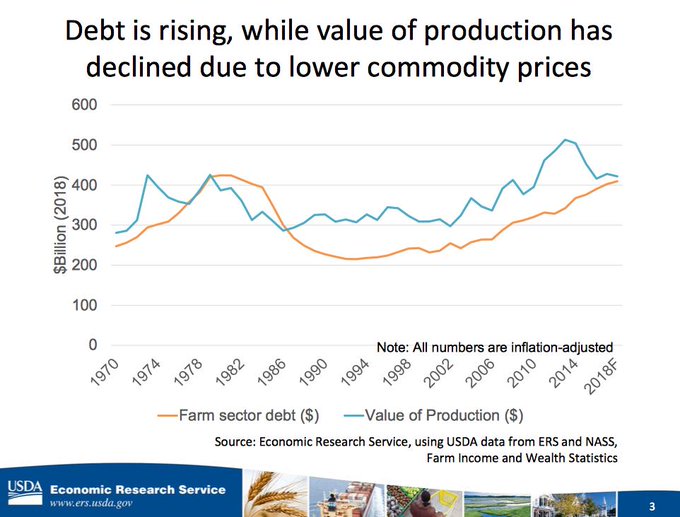 #Debt is rising, while value of production has declined due to lower #commodity prices (Christopher Burns, Economist, @USDA_ERS, https://goo.gl/PQL1QX )

Also this week, Bloomberg writer Mario Parker reported that, “Already suffering from low crop prices and the U.S.-China trade war, Mother Nature has delivered yet another blow to the beleaguered American farmer. Growers in the heartland this year have seen arctic cold blasts, been blanketed by snow and just in the last week were inundated by floods. Archer-Daniels-Midland Co., one of the world’s biggest agribusinesses, said Monday that it expects weather disruptions to have a negative pretax operating profit impact of $50 million to $60 million for the first quarter.”

In other developments, Bloomberg News reported Tuesday that, “China may increase U.S. pork imports to a record this year as part of a commitment to bolster purchases of American farm goods to resolve the trade war, according to people familiar with the situation. 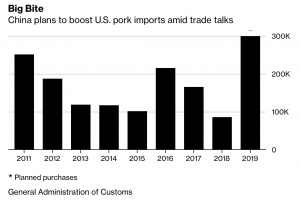 The article noted that, “The final volume will depend on the outbreak of African swine fever in China, according to one of the people. The disease, which is fatal to pigs and is proving hard to contain, has been devastating hog production since it was first reported in August. It’s already slashed the sow-breeding herd in the world’s No. 1 pork market by 15 percent. 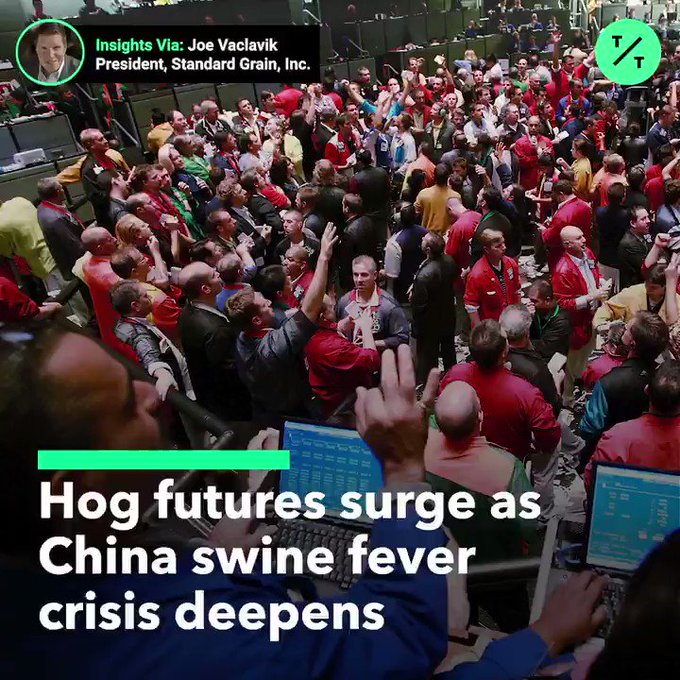 Tuesday’s article stated that, “The estimate for China’s imports may be ‘quite conservative,’ given the losses from the swine flu outbreak and the Asian nation’s appetite for pork, Rich Nelson, chief strategist at Allendale Inc. in McHenry, Illinois, said in a telephone interview.

“‘My estimates, and some of the others I’ve seen, are actually calling for a tripling, if not even quadrupling,’ he said.”