Foliar Corn Diseases and Beetles on the Move 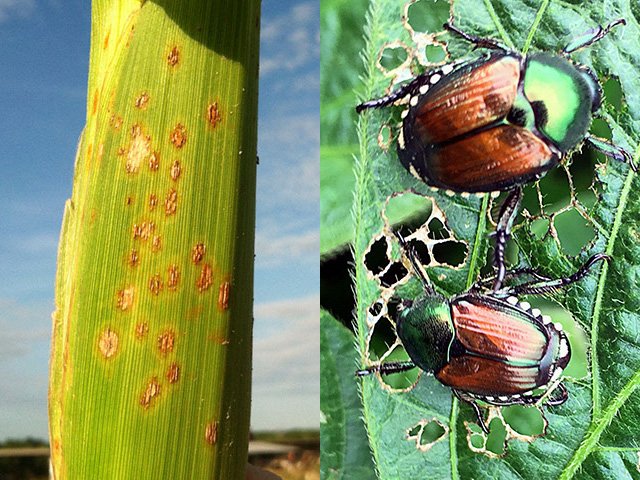 Southern corn rust, on the left, has moved into some Midwest states this week. Japanese beetles, on the right, have been active for weeks in both corn and soybean fields. (Photos courtesy Bob Kemerait, UGA, and DTN’s Pamela Smith)

Bad news, crop scouts. As the heat and humidity cranks upward, crop experts are urging growers to walk corn and soybean fields more often than ever in the coming days and weeks.

“Not letting the insects stage a sneak attack on you and build up for next year is really important,” noted Joe Spencer, an entomologist with the Illinois Natural History Survey, who tracks and analyzes western corn rootworm populations in Illinois each year. “Because this is really also about next year right now, and making sure you’re aware of the populations you have out there.”

Nathan Kleczewski, University of Illinois Extension plant pathologist, agreed, particularly since southern corn rust has been spotted in the Midwest states of Indiana and Illinois this week. “This disease can blow up from the South and build up really quickly, so people do need to be looking,” he warned.

Both Spencer and Kleczewski were trooping through blazing hot crop fields and scouting for their respective pests as they doled out this advice, so they feel your pain.

“For a year that’s probably not going to be very profitable, it sure has required a lot of extra work and worry just to make the best of the bad situation,” Spencer remarked.

For this week, southern corn rust, gray leaf spot, Japanese beetles and western corn rootworm beetles made the top of the scouting list in the Midwest. Here are some details on each:

This tropical corn disease thrives in high temperatures and high humidity, so it is loving the Midwest this week, Kleczewski noted. The spores blow up from the Gulf Coast each year, and recently got a boost from Tropical Storm Barry.

“The spores can move miles on air currents,” Kleczewski explained. “It only needs about six hours of leaf wetness to infect, and then within a week to 10 days, you will see pustules showing up.”

Plant pathologists have confirmed the presence of these rust pustules in Missouri and Indiana, and recently, Kleczewski fielded a likely sighting from southern Illinois. “The issue is for our late-planted corn,” he said. “We still have corn that is in the V8 or V10 growth stage and that is what I’m most concerned about.”

The disease develops fastest in temperatures between the mid-70s to low 80s, with plenty of moisture, which Midwest nights can usually provide this time of year, Kleczewski noted. Look for small, round, yellow-to-orange pustules, usually located only on the upper sides of corn leaves, often surrounded by a halo of light-colored chlorotic tissue. Don’t confuse it with common rust, which has darker red pustules, with a more oblong shape, he added.

Under the right conditions, the disease is famous for its ability to spread rapidly through a field, often taking growers off guard.

“Each pustule can produce thousands more spores,” Kleczewski noted. “If you haven’t scouted for a week, and then you take off for vacation for another week, you can leave a nice field behind and come back and have missed your window for control entirely.”

You can use the new southern corn rust IPM pipeline website to track its spread here: https://corn.ipmpipe.org/…

See more on managing it from the Crop Protection Network here: https://crop-protection-network.s3.amazonaws.com/…

Gray leaf spot was common in parts of the Midwest last year, and it left plenty of inoculum behind for 2019, Kleczewski noted. The disease thrives in warm, humid conditions and has been spotted in Illinois, particularly the west-central region, he said.

“If you have 5% to 10% severity on one or two leaves below the ear leaf, and you’re not quite at tassel, you probably need to think about managing it,” he said. “Because it will be moving from the bottom of the canopy up, and you want to make sure the ear leaves and above are protected through the critical phases of grainfill.”

Look for gray, brick-shaped lesions, not to be confused with the brownish, cigar-shaped lesions of northern corn leaf blight, he said. “Some people describe them as little matchsticks and they can expand to a couple inches long,” Kleczewski said.

It’s true that some western corn rootworm larvae may not have survived the soggy and delayed planting season, Spencer noted. “The larvae are highly susceptible to being killed if you have saturated soils during egg hatch,” he explained. “And there were probably a lot of larvae that– if they didn’t drown — found no corn roots when they emerged, because the field was not planted yet or the plants weren’t large enough so support much larvae.”

That said, conditions at egg hatch, which generally ranges from late May into early June by geography, varied across the Corn Belt this year. Scouting for adult corn rootworm beetles, which are emerging now, is a good way to gauge how high or low your populations will be next year as well as estimate potential root injury, Spencer noted.

“If your corn was planted in a timely fashion, you may be starting to get some silks and tassels showing up, and that’s a good place to look for beetles,” Spencer said. “They’re highly attracted to the volatiles that come off the silks.”

If you spot some beetles or spy some corn plants leaning, consider digging roots, he added. “Dunk them in a bucket of water, shake dirt off carefully and see if you can see evidence of missing roots,” he said. “You’ll see roots that have irregular missing tissue — they’ll look chewed up.”

You can use the Handy Bt trait table here to assess what rootworm traits your hybrids use and how effective they remain in the face of resistance: https://agrilife.org/…

Spencer recently witnessed a neighbor’s entire linden tree be skeletonized by Japanese beetles, and entomologists across the Midwest are reporting that they are invading corn and soybean fields this month.

The iridescent, bronze-colored beetles tend to cluster together when feeding, often along field edges, which makes them both easy to spot and very alarming. “They’re attracted to the volatiles given off by feeding beetles,” Spencer explained. “That’s why you’ll walk rows and see nothing and then suddenly see 30 beetles on a single plant.”

The beetles will eat both soybean leaves and corn leaves, but they really prefer corn silks. Soybean leaves can handle a surprising amount of defoliation before it becomes economically damaging — up to 30% in vegetative stages and 20% in reproductive stages, which can look quite distressing on a leaf surface. “People overestimate the amount of feeding they see tremendously,” cautioned Spencer.

See a guide to estimating leaf defoliation from the University of Nebraska here: http://extensionpublications.unl.edu/…

In corn, Japanese beetles do their most damage by trimming corn silks so severely they jeopardize pollination. Entomologists recommend treatment if you find three or more Japanese beetles per ear, with silks clipped to less than 1/2-inch and pollination in the field under 50% complete.

See more on Japanese beetle management from the University of Nebraska here: https://cropwatch.unl.edu/…