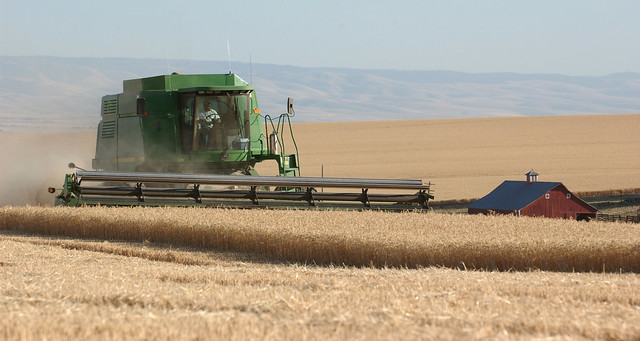 Many farmers now use standard soil tests to determine fertilizer amounts and they often apply the same amount uniformly over thousands of acres. But it could be that they are wasting money by over-fertilizing areas that produce low yields and not putting enough fertilizer on high-yielding areas, says Merle Vigil, who is acting research leader. (Oregon State University, Flickr/Creative Commons)

A few years ago, Agricultural Research Service (ARS) scientists in Akron, Colorado began noticing a pattern to their wheat harvests: yields were higher in low-lying areas.

That by itself was no surprise. Soils at low-lying spots in a field capture run-off from higher spots, often have more organic matter and are better at holding water, which is critical in the soils of eastern Colorado, where water is scarce, and crops are strictly rain-fed.

But it was the extreme variability in yields that surprised the researchers. Yields varied from 17 bushels per acre to 110 bushels per acre—sometimes in the same field in the same year. The numbers also showed that the yield potential dropped by about 35% for every three-foot increase in elevation, and elevations can vary by up to 15 feet in some fields of eastern Colorado. “We knew elevation was a factor, but we didn’t realize that the differences in yield could be this dramatic,” said Merle Vigil, who is acting research leader of the Central Great Plains Resources Management Research Unit in Akron.

Vigil, Francisco Calderon and their ARS colleagues in Akron have been sharing their preliminary findings with area farmers at workshops and in meetings and they have started work on a project to see if they can help farmers save on fertilizer costs and increase yields of both winter wheat and summer corn, which are often rotated in the region. The researchers have set up three management zones in 12 fields and over the next five years they plan to apply different rates of fertilizer in each zone to see how yields are affected by elevation. The results should help farmers better target fertilizer needs for crops produced on 26 million acres of cultivated dryland in the Central Great Plains.

The amount of nitrogen fertilizer applied affects the protein content of the wheat, so the researchers plan to set a target of producing wheat with 11.5 % protein in deciding how much fertilizer to apply to their test plots. (Wheat flour needs to have at least 11.5% protein content for a loaf of bread to rise adequately. The wheat will sell at a lower price if protein levels fall below that.)

Many farmers now use standard soil tests to determine fertilizer amounts and they often apply the same amount uniformly over thousands of acres. But it could be that they are wasting money by over-fertilizing areas that produce low yields and not putting enough fertilizer on high-yielding areas, Vigil says