On Tuesday, the House Agriculture Livestock and Foreign Agriculture Subcommittee held a hearing highlighting agricultural trade issues. Lawmakers discussed the USMCA, the ongoing trade negotiations with China, and the impact that trade conflicts are having on U.S. farmers.  Meanwhile, recent news articles have discussed the potential progress of trade related legislation.

In his opening remarks, Subcommittee Chairman Jim Costa (D., Calif.) noted that, “This Administration’s trade policies have made tough times for American farmers and ranchers worse. I am glad that the President has abandoned his ill-conceived plan to put a new tariff on Mexico. I, however, remain concerned that this whole exercise has slowed down the positive momentum that existed after the Administration finally agreed to lift the 232 tariffs on Mexico and Canada only a few weeks ago. I hope there won’t be any more surprise policy changes from the Administration if we want to continue productive conversations on the U.S.-Canada-Mexico-Agreement.” 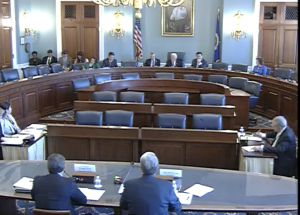 Rep. David Rouzer (R., N.C.), the Subcommittee Ranking Member, stated that, “It is vital that we approve USMCA quickly so that the fine folks at USDA and USTR can open up even more market access for U.S. food and fiber in Japan, China, and elsewhere around the world.”

Ted McKinney, the USDA Under Secretary for Trade and Foreign Agricultural Affairs, pointed out in his opening remarks that, “The USMCA is a top legislative priority of the Administration just as it is a top priority of much of U.S. agriculture. It is important for Congress to pass the USMCA so American farmers can begin to benefit from the agreement.”

Precisely what we discussed in today’s hearing.

Passing #USMCA is the best thing we can do for American Agriculture! #agtrade #USMCANow

On my way to Iowa – just heard nearly 1,000 agriculture groups signed a letter urging Congress to approve the USMCA. Our Patriot Farmers & rural America have spoken! Now Congress must do its job & support these great men and women by passing the bipartisan USMCA Trade Agreement!

And Ambassador Gregory F. Doud, from the U.S. Trade Representative’s Office, explained on Tuesday that, “[P]assage of the United States – Mexico – Canada Agreement is an absolute necessity for U.S. agriculture.” 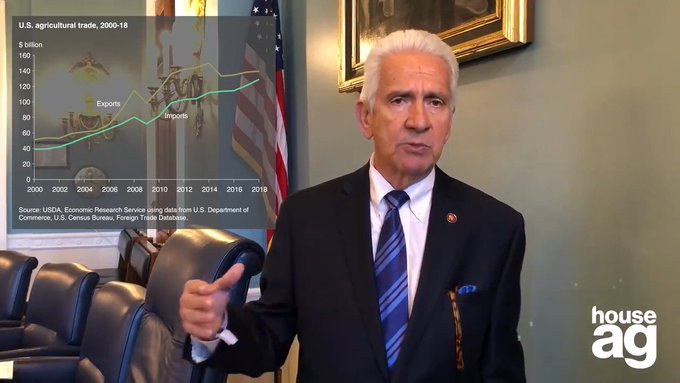 After today’s hearing, @RepJimCosta talked about what he heard from our witnesses.

Amb. Doud added that, “I hope that China will make real structural changes across the range of unfair policies and practices that yield actual, verifiable, and enforceable results. If we are able to have an acceptable agreement, President Trump expects substantial and immediate purchases of U.S. agricultural products, as well as the removal of technical and regulatory barriers that impede such purchases.”

During the discussion portion of Tuesday’s trade hearing, Mike Conaway (R., Tex) asked, “Could you both talk to us about the consequences of not getting the USMCA done?”

Under Secretary McKinney stated that,

Well, we just must get it done. I don’t even want to think of the alternative. And it’s not just because of its reach and its importance—USMCA, we’re speaking of—across three nations that goes well beyond agriculture. I mean, our interest here is, of course, agriculture. We’re…it is just crucial. The message to the world and to those other many, many, many countries that we want to do some sort of an agreement with would be disastrous.

Amb. Doud indicated that, “I would just simply add that we’ve got plans to move forward in a lot of different places in the world, and if we don’t get USMCA done it halts the entire trade agenda of the entire administration.” 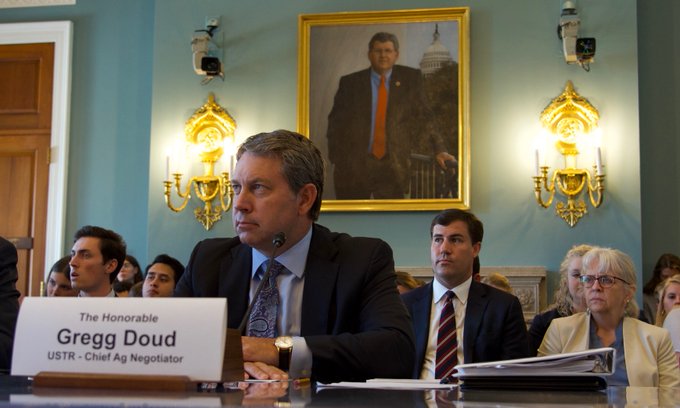 “Whether it’s poultry & beef to N. Africa, pork to S. America, grains & horticulture to Asia, dairy to Chile, & the list goes on, the Administration is focused on opening markets for America’s farmers & ranchers.” –Amb. Doud, testimony before the House Committee on Agriculture

With respect to China, Rep. Angie Craig (D, Minn.) asked, “Looking down the road, what can our producers realistically expect in terms of reopening market access? Do you think we can make up enough access in other markets or do you see those markets opening back up to us any time soon?”

Amb. Doud stated that, “I want to describe our situation with China a little bit because I think it’s very important. Yeah, we do sell a lot of soybeans to China. But in the case of poultry, we haven’t had an access and haven’t sold China a pound of poultry since 2015 due to high path avian influenza. We now sell China a thimbleful of beef after being blocked out of the market due to BSE for 15 years. We have Codex and MRL issues with pork and ractopamine. We can’t sell them pet food, rice, dairy, animal feed, seafood, potatoes, nectarines, blueberries, barley, alfalfa, almond meal, Timothy hay. We don’t have access.

“And in fact my biggest frustration—and we’ve spent hours with China talking about this—is in terms of biotech approvals.

China is the only country in the world that requires that you send them the seed and they have to cultivate that seed in China before they approve the biotech trade. We know what happens once that happens. This is the frustration, and we’ve had Ted and I and an enormous team at USDA and USTR have spent hours and hours and hours with China trying toresolve these structural, non-tariff trade barriers.

And in response to a question from Chairman Costa on China, Under Secretary McKinney indicated that, “I would say that Ambassador Doud and I and our teams were having great progress as we talked with China, including many of the commodity and the products that you referenced. But when that point in time came that there was backsliding—and it was very distinct, it was obvious—the decision was made that we could not see that happen.

“And I might add that we were not seeking things that were so out of line that they weren’t being treated with same accord to other countries. China was providing access to other countries. We were seeking same, similar…yeah…we were pushing the boundaries on a couple of things. So I think the decision was made to step back and revisit this, and so we’re in this, I’ll call it, ‘cooling off‘ period. I hope that the presidents will meet on the margins of the G20 and get this going again.” 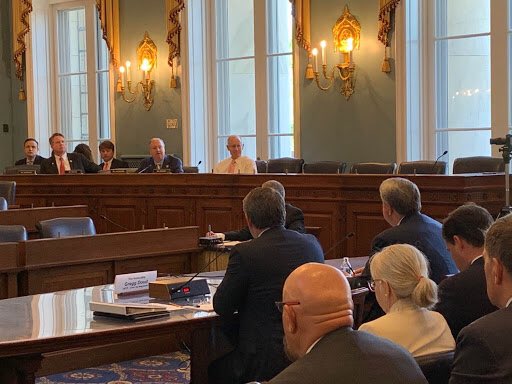 Today in @HouseAgGOP we heard from Ambassador Doud and Undersecretary Ted McKinney. We need to pass #USMCA to support jobs dependent on trade with our North American neighbors! – JH

More broadly, Chairman Costa queried, “Do you feel that our agriculture interests are being well represented as these negotiations are taking place in the West Wing?”

Amb. Doud stated that, “Absolutely. There is absolutely no question about it. And you see the President referencing agriculture on a repeated basis with regard to this. And I can tell you in the building we are constantly talking about the need to remove these barriers.”

Under Secretary McKinney responded by saying,

Mr. Chairman, there is no doubt in my mind the White House has our and the ag community’s back. And I think we can see this with many tweets. We can see this in his statements, with his actions. Now how we’re going about it clearly is an issue because we’re in choppy waters. But if you’re asking the question does the White House have our back, the answer is yes.

And on the issue of MFP program payments, Rep. Vicky Hartzler (R., Mo.) stated that, “Farmers last week were trying to make a decision between taking prevent plant and wondering about if they should try to hope that the water gets off and they’ll be able to plant something so that they get the market facilitation program payment, because that’s only going to be on planted acres.”

Addressing this issue, Under Secretary McKinney noted that, “I can say that last night, 6:30 or 7:00, the Secretary issued a statement that tries to clarify at least a little bit, without giving…without disobeying the law. Basically what that was is to try to encourage farmers again to make the decision based on their own right best farm soils, conditions, etc. And I think it was basically a statement that says the 3 billion that you all passed on disaster payments and the 16 billion, 14 and a half would be market facilitation, we’re going to maximize as best as we can, as the law allows, to address these kinds of things.

“So that’s coming as quickly as we can, ma’am. And we’ve got the farmer at heart. We understand that these are different dynamics all sort of piling on each other, and we want to try to make it as flexible, but also, ma’am, as easy as possible. We got good feedback from mitigation one that it was a fairly simple program. Not perfect, but a fairly simple program. So we want to try to keep it in that vein, ma’am.”

Trade Issues in the News

DTN Ag Policy Editor Chris Clayton reported Tuesday that, “In the effort to pile on numbers supporting the U.S.-Mexico-Canada Agreement, 950 agricultural groups and businessessent a letter to leadership and members of Congress on Tuesday calling on lawmakers to quickly consider and ratify the agreement. 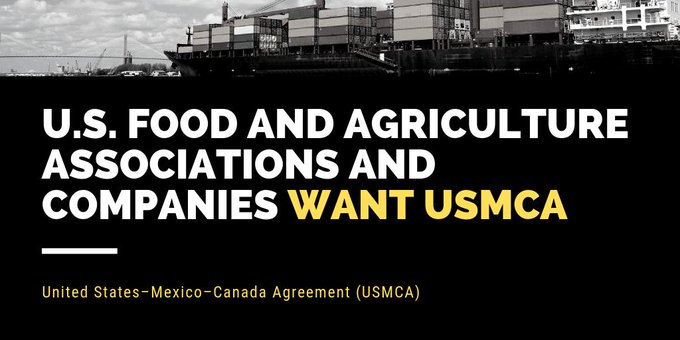 food and ag associations and companies that announced their support for #USMCA today. Read the letter here: http://ow.ly/ha3a50uBGzh

“The timing of the letter coincided with a House Agriculture Subcommittee hearing on trade early Tuesday as well.”

Also Tuesday, Bloomberg writer Erik Wasson reported that, “House Democrats are expressing optimism as they begin what could be the final stage of negotiations to approve the U.S.-Mexico-Canada trade agreement, paving the way to vote on President Donald Trump’s top legislative priority.

“Speaker Nancy Pelosi on Tuesday is expected to formally name lawmakers to the working groups that will work with the administration on the labor, environment and pharmaceutical provisions that Democrats are seeking to strengthen. Pelosi has also emphasized the need for strong enforcement mechanisms in the accord that will overhaul the North American Free Trade Agreement.

“Ways and Means Chairman Richard Neal, the Massachusetts Democrat leading talks with U.S. Trade Representative Robert Lighthizer, said Monday he hopes a deal can be finalized within 30 days. The Trump administration has signaled plans to send a bill implementing the USMCA to Congress by the end of the month to prod lawmakers to vote on it before the August recess.”