House Agriculture Subcommittee Hearing-“Reviewing the State of the Farm Economy”

On Thursday, the House Agriculture Subcommittee on General Farm Commodities and Risk Management held a hearing titled, “Reviewing the State of the Farm Economy.” Today’s updates provides a brief recap of some of the issues that were discussed at the Subcommittee meeting.

In his opening remarks at the hearing, Subcommittee Chairman Filemon Vela (D, Tex.) stated that, “Every one of us seated up here has heard from farmers in our districts about the bad farm economy. Commodity prices are low, input costs are rising, and financial pressure is mounting on farmers across the country.” 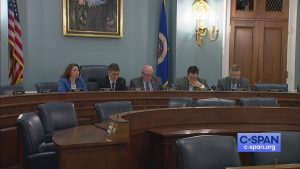 The numbers paint a rough picture: USDA forecasts net farm income level for 2019 to be only 77 percent of the annual average for 2000 through 2017. It’s down 50 percent from 2013 alone. Inflation-adjusted farm debt is the highest it has been since 1980 and the debt-to-asset ratio for farmers is rising steadily. 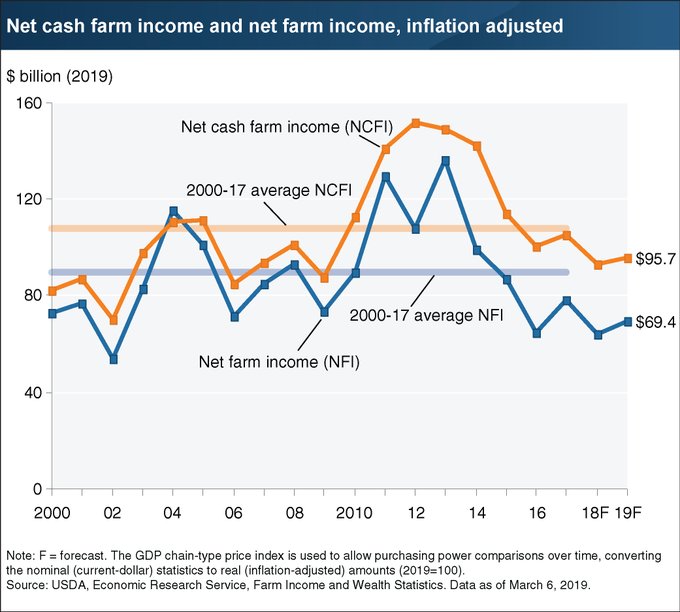 If 2019 forecast increases are realized, net #farm income and net cash farm income would be 22.9 percent and 11.5 percent below their respective averages calculated over the 2000-17 period. @USDA_ERS 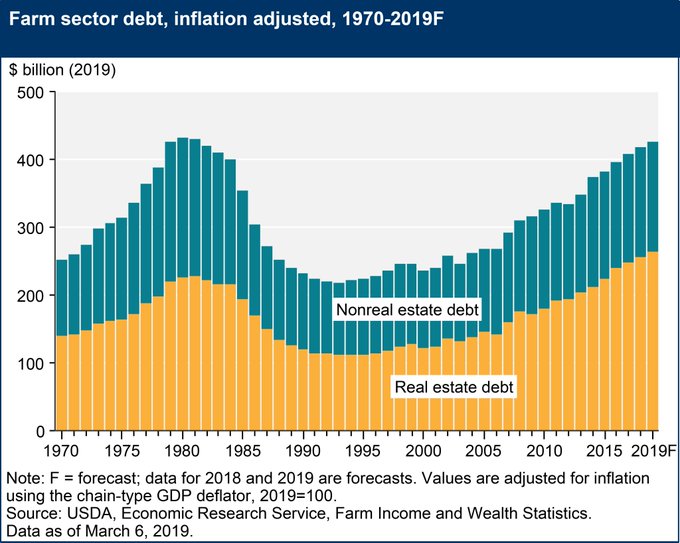 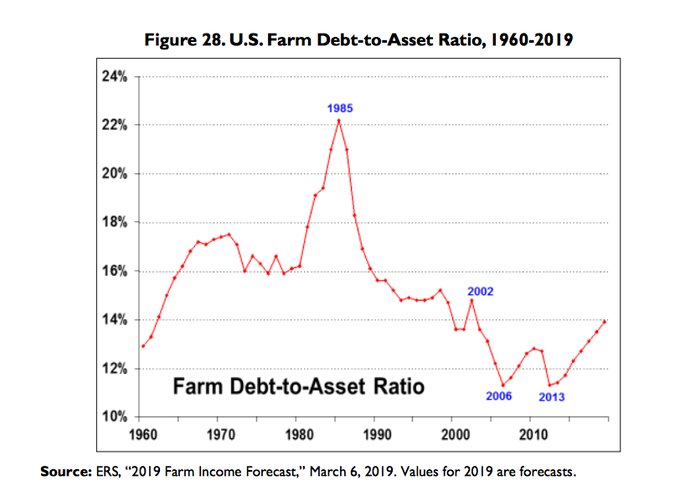 The #farm #debt-to-#asset ratio is forecast up in 2019 at 13.9%, the highest level since 2002 but still relatively low by historical standards (CRS- Congressional Research Service).

Chairman Vela added that, “We should not stand down just because the economic indicators today don’t look exactly like the run-up to the 1980s. We’re here to consider what can still be done to help struggling farmers and truly make this an economy that works for everyone.”

Subcommittee Ranking Member Glenn ‘GT’ Thompson (R., Pa.) pointed out on Thursday that, “Unfortunately, as those involved in agriculture know all too well, markets are cyclical and Mother Nature is unpredictable. Now, the rest of the economy is booming, but for our farmers, prices have fallen lower, and have stayed there longer than anyone could have predicted. To add insult to injury, over the past couple of years, almost every region of the country has seen its share of widespread devastation from natural disasters, including hurricanes, floods, fires, drought and even volcanic eruptions, just to name a few.”

Ranking Member Thompson also noted that, “The current recession in the agricultural economy is a sobering reminder that farm policy, while incredibly helpful, does not make our farmers and ranchers whole. In talking to many folks in my district, there are a lot of farmers who are either already getting out of the business or are one bad crop away from being forced to call it quits.”

Texas farmer Matt Huie stated in prepared remarks at the hearing that, “This year, we entered into the sixth straight year of recession for agriculture, encountering a roughly 50 percent drop in net farm income over this period, the largest drop since the Great Depression. This long, ongoing recession is taking its toll across the country and across all commodities.

In South Texas, the stress in the air is like the humidity: so thick you can feel it.

“Few in agriculture are immune.” 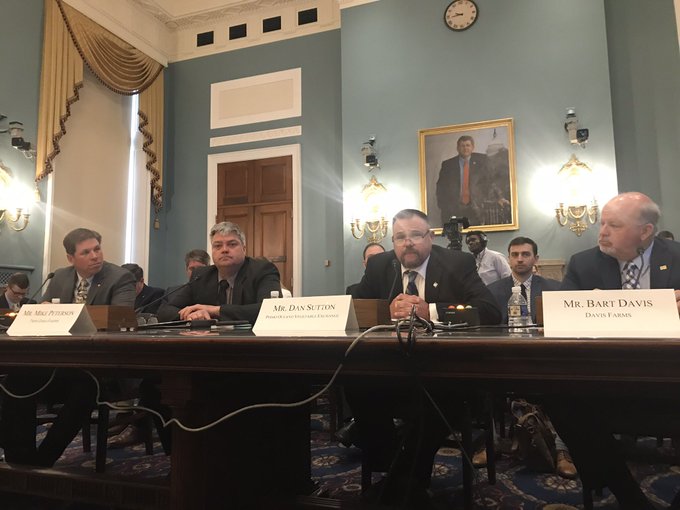 Thanks to Matt Huie, Mike Peterson, Dan Sutton & Bart Davis for their valuable testimony at today’s subcommittee hearing on the state of the #FarmEconomy.

Mr. Huie also indicated that, “Based on my conversations with lenders, there has already been an uptick in the denial of credit to farmers seeking financing to produce a crop and this is expected to significantly increase in time for the next planting season unless conditions improve.”

Mike Peterson, a farmer from Minnesota, stated in prepared testimony Thursday that, “The last five years have been incredibly challenging on my farm and on farms across Minnesota. In 2018, median net farm income in the state was at its lowest level in the past 23 years. In southern Minnesota, corn prices have been at or below the cost of production for five consecutive years. Strong soybean yields and fair prices had kept many farmers profitable until the trade dispute with China took its toll on the market last year.”

During the discussion portion of Thursday’s Subcommittee hearing, Chairman Vela stated that, “Most of us on this subcommittee represent pretty large swaths of land. And I can’t go to any farmer in the 270 mile stretch of South Texas that I represent without hearing about how difficult it is for farmers to get loans and financing and things like that. What I’d like to hear from each of you is given the geographic diversity that is represented here today, what you are seeing and what your fellow farmers are seeing on that front.”

Mr. Huie responded by saying, “As you said, credit is a challenge right now. A couple of fundamental reasons that that’s a problem relate directly to the market. The first is that most credit in our area is calculated based on your historical production times a given price. And that’s what the beginnings of loans are built out of. And as those prices decrease, so does your ability to finance up to that level. Secondly, as crop insurance values decrease, and the ability to collateralize crop insurance therefore decreases, that changes your ability to borrow. And so both of those have put a squeeze on.”

Mr. Peterson explained the lending situation with his local bank by saying, “It’s basically on equity of past generations, our diversification in our livelihood, and their ability to believe in us. We can’t present them with favorable numbers. We’re just…we’re trusted friends, I guess, because the numbers aren’t working.”

Mr. Peterson added: “So I guess what I’m trying to say is if we were across the desk, we’d either have to believe in the individual or we’d have to make the decision from some other means because we just don’t have the numbers before us to present positive cash flow.”

Rep. Angie Craig (D., Minn.) focused most of her remarks during the discussion portion of Thursday’s hearing on trade issues, and stated that,

To me it’s just undeniable that this administration has continuously used our family farmers as political bargaining chips in a senseless trade war.

“When I talk to farmers in my district, the notion that this is short-term pain for long-term gain is getting old. As our farmers are planning for the year ahead, the threat of withdrawing from NAFTA continues to loom and there is still no resolution with China. Just this week we saw the impact of the administration’s trade actions play out in real time.” 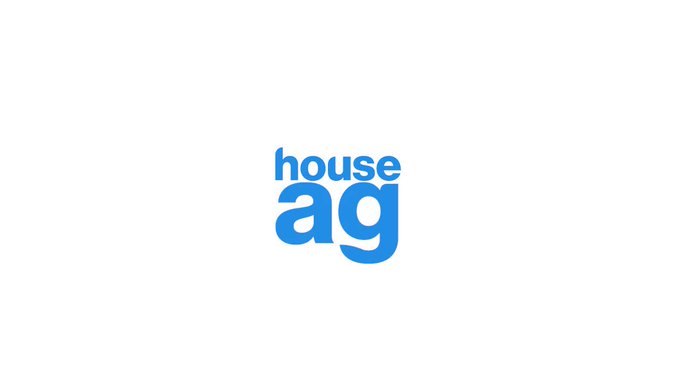 After our hearing today on the State of the Farm Economy, @RepAngieCraig had a few words (and charts) on the trade war. Soybean farmers want certainty, and she’s going to work to get it for them.

Rep. Craig indicated that, “Ahead of negotiations with China, the President, in a tweet, threatened a new round of tariffs on China, going as far as to say that these tariffs are, ‘partially responsible for our great economic results.’ This tweet sent soybean futures plunging to record lows, all part of a sustained period of market volatility and sharp decline of soybean prices over the last year.

Even if the administration reached a deal tomorrow, we may never regain our international market share for U.S. crops.

“If we don’t reach an agreement quickly, stocks will continue to grow and prices will continue to fall. This market volatility is threatening to change the makeup of rural America for years to come. Farmers are resilient and hardworking people who just want a fair shot at a market and a fair price.

“So with that, I do want to start with you, Mr. Peterson. You mentioned in your testimony that you originally supported the goals of securing better trade agreements to hold China accountable. I too supported that. Do you feel our rural communities, places like Northfield and those surrounding rice county towns and townships, have received the great economic results that the President claims?”

Mr. Peterson noted in part that, “So to answer your question, you know, and put it into numbers, I’m not going to speculate or guess, but it’s…when farmers don’t have money, they can’t spend it in town, and not having the markets that our checkoff dollars and all of our negotiations in the past had negotiated for, we need to get ships tied up to docks in foreign countries. That’s just the way it is. And I don’t think we can accomplish that by telling our customer how to act.”