The 2018 Farm Bill provides landowners the opportunity to update program yields for the Price Loss Coverage (PLC) program and we recently examined the impact of crop rotation on the calculation for the option (farmdoc daily, January 17, 2019).  We discussed a concern that the formula does not address a fairness issue for farmers that use a crop rotation in which only one crop is planted to a Farm Service Agency (FSA) farm in a given year.  Specifically, the formula further narrows the 5-year update window, magnifying the impact of both yield-increasing and yield-reducing events on the updated yield and very different potential payments may result.  In this analysis, for a representative central Illinois case farm with a 50-50 rotation of corn and soybeans we find the average payment difference exceeds $3,000/year, on average with the only difference being the years in which corn and soybeans are planted in rotation.

PLC is one of the safety net program options available to farmers, authorized in Title 1 of the 2018 Farm Bill. PLC provides fixed-price based income assistance.  If triggered, payment calculations include a program yield; the difference between the reference price and marketing year average prices is multiplied by the program yield and 85% of the base acres for the payment amount.  A provision in the 2018 Farm Bill provides farm owners with base acres for covered commodities a one-time opportunity to update PLC program yields. The formula includes two steps: (1) 90% of the average yield for the 2013 to 2017 crop years on the farm, excluding any crop year in which the crop was not planted; and (2) reduced by a ratio that compares the 2013 to 2017 national average yields per planted acre to the 2008 to 2012 national average yields, limited to a range of 0.9 to 1.0.  Table 1 provides an initial estimate of the expected yield update formula for corn and soybeans (farmdoc daily, December 12, 2018).

Historically, when a provision in the Farm Bill provides the option for a yield update, the window for calculating the yield update has been either four or five years. Use of a small window amplifies the impact of yield altering weather events on the updated yield. The drawback to using a small set of years is also augmented by a crop rotation on an individual FSA farm; rotation means there are even fewer years within the already small window with yields for a particular crop to calculate in the average. For example, if a two-crop rotation such as corn and soybeans is used and only one crop is planted in a given year on an individual FSA farm, then the 5-year update window would only have two years of yields for one crop and three years of yields for the other crop.

As an example, a central Illinois case farm, located in McLean County, with 1,700 acres split evenly between corn and soybeans is created using averages of actual FBFM data for central Illinois farms with 1,500-2,000 acres. Financial and tenure characteristics of the farm are based on actual farm data. A farm of this size will likely include several individual FSA farms. A farmer using a 50-50 corn-soybean rotation may plant each individual FSA farm to half corn and half soybeans each year, or divide the corn and soybeans acres over total farmed land and plant all corn on some FSA farms and all soybeans on other FSA farms each year.

The yield update will be evaluated separately for each FSA farm, comparing actual yields from 2013-2017 on that specific piece of land to U.S. yields. In some cases, farmers will not have yields for a given crop on an individual FSA farm for all five years and the yield update will be calculated using only the years in which yield data for the crop is available for the FSA farm. The farm yields are an average of actual yields reported annually on McLean County farms enrolled in Illinois FBFM.

Looking at the 2018 Farm Bill update period from 2008, the impact of the 2012 drought on the 2014 farm bill corn update yield is clear.  In addition, the rotation with corn in the drought year benefited from having corn in the two highest years during the 2018 farm bill update window: 2014, 2016.  In contrast, the rotation without corn during the 2012 drought had corn in the 2 lowest years during the 2018 farm bill update window:  2013 and 2015.  Although soybean yields were lower in 2013 than the other four years, there was less variation in soybeans yields over the five-year period so the averages have less variability than corn. 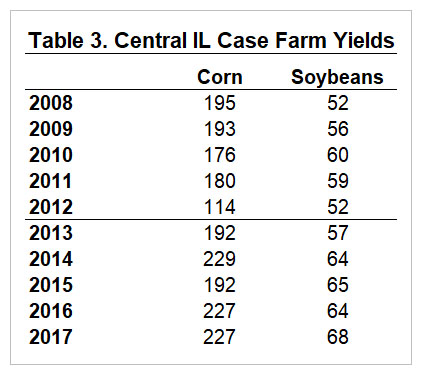 The Gardner Farm Income and Policy Simulator (GFIPS) is used to evaluate the farm level impact of policy changes to the PLC program yield update formula. All starting variables and all other projection period variables are held constant. With 2017 as the model base year, PLC payments are estimated for the case farm for the 2018 through 2022 crop years under 10,000 different price and yield sets for the model’s five-year forecast period. Although 2018 Farm Bill policy will be implemented beginning with the 2019 crop, the one-time option for yield update will not take effect until the 2020 crop. Therefore, results are shown for 2020 through 2022.

The incidence of a payment depends on the relationship between marketing year average (MYA) price and the reference price, shown in Table 4, not the payment yield. Therefore, the number of instances triggering a PLC payment is the same for all scenarios in a given year. Although program yield is not a factor in occurrence of payment, as a multiplier in the payment calculation, it does influence payment amount.

The per acre payments are made on 85% of the base acres on the farm and the total PLC payment a person or legal entity can receive for the sum of all covered commodities, with the exception of peanuts, is $125,000. With this limit on total PLC payment imposed, the average total payment will not have the same percent variability as yield or the per acre payments. For this analysis we assume that base acres are evenly divided between corn and soybeans.

The average PLC payment by year for all instances and for instances triggering a payment is shown in Table 6. The total payment for instances triggering a payment is more than $3,000 higher, on average, when a corn and soybean rotation had corn in 2008 compared to soybeans in 2008. This advantage extended more than $11,000 under some price and yield scenarios each year. As a comparison, in the approximately 10% of instances that had soybeans in 2008 and a higher total farm payment, the largest advantage recorded was under $300 in all three years.

This analysis illustrates how the PLC program yield update formula is heavily reactive to variation in yields over a short window of time.  It demonstrates how crop rotation further narrows the update window and magnifies the impact of yield altering events on updated yield. The average payment difference across alternative corn-soybean rotations exceeds $3,000/year, on average, for a representative central Illinois farm when PLC payments were triggered. Some 2020 through 2022 price and yield scenarios show a more considerable rotational advantage with PLC payment more than $11,000 depending on which years a farm had corn or soybeans planted in the rotation. This high payment difference was observed in a low price year during which government program payments may have a disproportionately large impact on farm profitability and perhaps even survivability of the farm if it is highly leveraged.  Because the case farm had considerable variation in corn yields throughout the update window from 2013 through 2017, and very little variation in soybean yields in the same period, the crop rotation had a large impact on corn payments but little impact on soybean payments. On a given farm, any crop could fall into either scenario.