Wall Street Journal writer Lauren Silva Laughlin reported earlier this month that, “Losses are popping up in farmers’ income statements and the pain can be seen in the share prices of the companies that depend on them.

“After a challenging planting season due to wet weather, trade uncertainty has ravaged farm profitability. Flooding throughout the spring caused what JPMorgan Chase deemed a ‘planting season from hell.’

In addition to uncertainty, “inconsistent” is another word used to describe Cron Belt crop conditions after this year’s growing season.

Bloomberg writers Isis Almeida and Michael Hirtzer reported earlier this week that, “Inconsistency is the one constant coming out of a major U.S. crop tour that kicked off on Monday as scouts get to see first hand the impact of wild weather on Midwestern corn and soybean fields.

“In Ohio and South Dakota, development is well behind last year after excessive rain delayed planting before conditions turned dry in recent weeks, according to the first day of the Pro Farmer Midwest Crop Tour.” 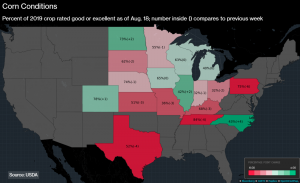 “U.S. Crop Conditions Are ‘Hit or Miss’ as Tour Kicks Off,” by Isis Almeida and Michael Hirtzer. Bloomberg News (August 20, 2019).

The article pointed out that, “Planting in many fields was at least two to three weeks late, making a long autumn necessary for crops to reach full maturity before a frost threat. Storms in the past few days left standing water in some fields.”

Oct. 15 is a critical date for corn farmers concerned about “killing frost.” Insights via @CMEGroup 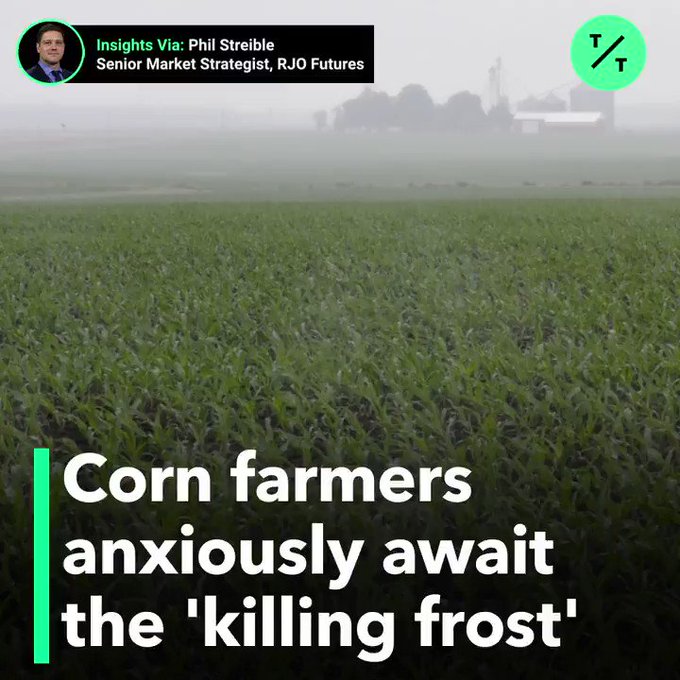 While crop concerns pushed up prices earlier this year, giving farmers an opportunity to sell, bigger harvests in South America and Europe have undercut American supplies in global export markets. The loss in demand and increased variability in the development of corn and soy has added to frustrations for growers already grappling with the yearlong trade dispute with top global soy buyer China.

The Bloomberg writers added that, “The crop-scouting task this year is also made difficult by record amounts of acres that couldn’t be planted due to relentless rain.” 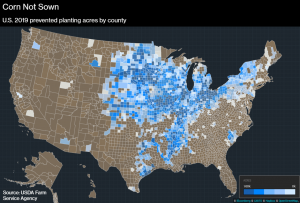 On Wednesday, Kirk Maltais reported at The Wall Street Journal Online that, “The 2019 planting season has been among the most volatile in memory for many farmers, making any insight into the size and condition of the coming crop more valuable than ever. Record rainfall this spring slowed or blocked many farmers from planting. That will weigh on the incomes of farmers who planted less, but expectations for a smaller harvest also pushed up crop prices overall.

“Meanwhile trade tensions exerted downward pressure on prices over the past year, including a steep slide since the U.S. and China ramped up their tariff fight this summer. Corn prices rose 31% this year into May but have since fallen 20% again as the trade fight intensified.

December corn futures hover just above contract lows. What factors might be the catalyst for a rebound in the market? Insights via @CMEGroup 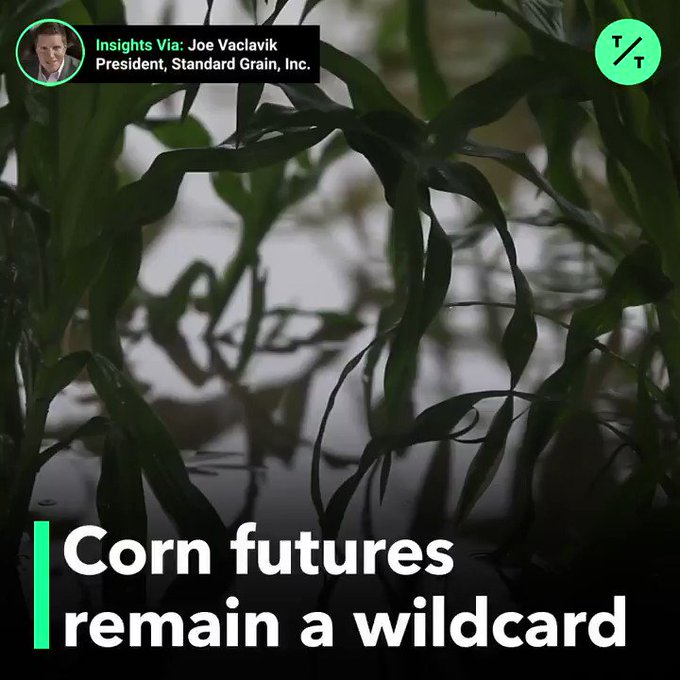 The Journal article pointed out that, “Since June, the weather in Michigan and much of the rest of the Farm Belt has turned drier than usual, leaving weak crops to fry in the sun.”

And Reuters writer P.J. Huffstutter reported this week that, “Corn farmers in west-central Illinois are facing potentially smaller corn yields this fall in what has been a challenging growing season after extreme weather and heavy rains delayed plantings across much of the U.S. Midwest, scouts on an annual tour said on Wednesday. 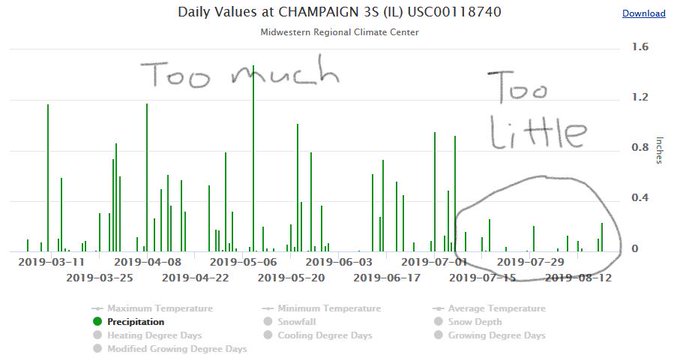 “The farm community and commodity traders are closely watching the four-day crop tour after grain futures prices plunged in the wake of a U.S. Department of Agriculture report earlier this month that forecast a larger-than-expected corn crop.”

The article stated that, “On Wednesday, corn yield potential averaged 175.56 bushels per acre (bpa) through eight stops in the Illinois counties of McLean, Tazwell, Peoria, Knox, Stark and Henry.

Here’s a look at #pftour19 #corn yields in Illinois by district. The Northeast district saw the largest YOY departure and the Central district had the smallest. Overall, the tour yield of 171.17 bu/acre is down 11% from last year’s findings. See below for a district map. 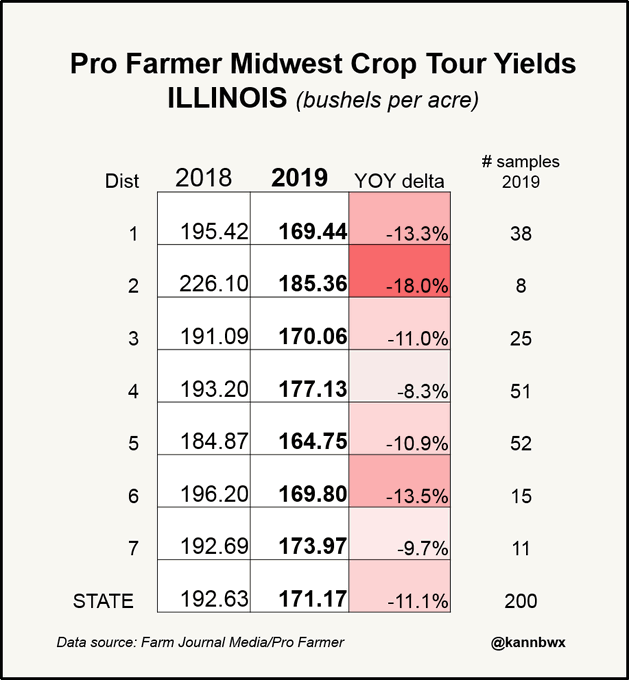 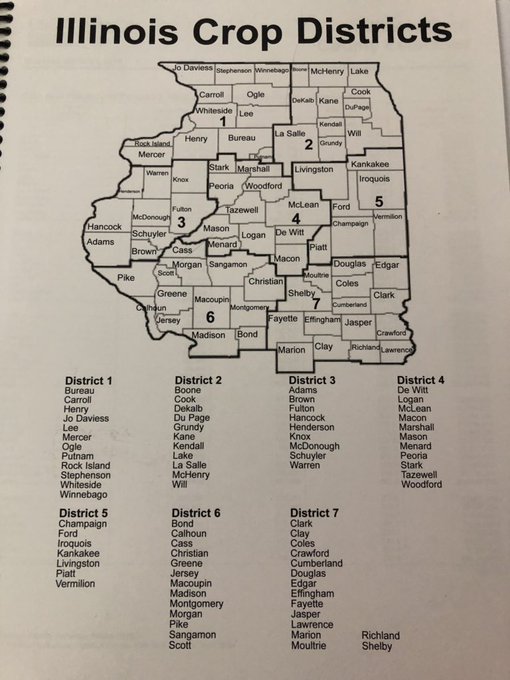 Ms. Huffstutter explained that, “A second leg that scouted six counties in Illinois – Bureau, Carroll, Marshall, Putnam, Woodford and Whiteside counties – with 10 stops found soybeans averaged 688.76 pods. That was below last year’s 1257.83 pods and the three-year average of 1246.61 pods. 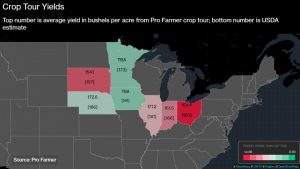 The Reuters article added that, “The trade publication Pro Farmer, which organizes the annual tour, will crunch the collected data and release its U.S. crop production and yield forecasts on Friday.”

Parts of Iowa are shaping up as one of the few bright spots in an otherwise lackluster corn-growing season in the U.S. Midwest, with some fields in the central western regions of the state even healthier than last year.

“That’s according to partial data collected on the third day of the Pro Farmer Midwest Crop Tour. While official results for the state, the top U.S. corn grower, will be released later Thursday, some early indications are positive.”

The article stated that, “But there’s also an east-west divide shaping up in the corn belt, with fields in better shape the further west you move. Iowa stands out as a particular example of this, since results in the state itself look to be splitting along geographic lines.

“Early results Thursday continued to underscore the east-west divide. Corn and soybean crops in east-central Iowa were heading for below-average harvests after farmers were unable to sow crops during the optimal window for planting, scouts found on the fourth and final day of the Pro Farmer Midwest Crop Tour.” 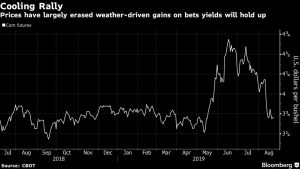 Almeida and Hirtzer pointed out that, “Amid the mixed results from the tour, corn futures in Chicago are heading for a weekly loss. While yields in some stretches are down from last year, conditions don’t appear to be as bad as some had feared, with tour scouts describing crops to be in relatively average shape.”