When cotton farmers meet at the Aubrey Country Store & Grill, a lunch spot surrounded by farmland in the Mississippi Delta, the talk inevitably turns to global trade these days.

Cotton exports to China have tumbled, and the domestic price for the crop has fallen roughly 30% since China slapped retaliatory 25% tariffs on U.S. farm commodities last summer. Stockpiles of U.S. cotton are forecast to be the highest in a decade.

“If China decided it was going to start buying some cotton it would be a game changer,” said Ramey Stiles, a 60-year-old cotton farmer who lives in nearby Marianna, Ark., in Lee County, an hour southwest of Memphis, Tenn. 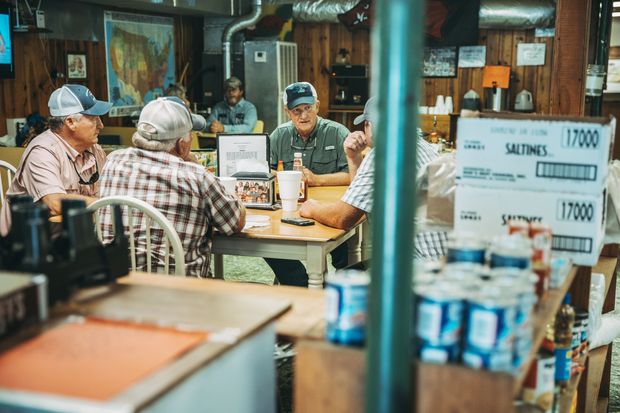 Cotton farmers gather around a table at the Aubrey Country Store & Grill in Aubrey, Ark.

He and other farmers talking over hamburgers and salads at the country store recently said they are hoping for a swift resolution to the trade spat with China, the world’s biggest importer of cotton.

Progress toward a trade deal with China has appeared stalled as the Trump administration determines how to address Beijing’s demands that it ease restrictions on Huawei Technologies Co., The Wall Street Journal has reported.

Farmers have been promised some help in a $16 billion package of aid to protect them from the impact of the trade dispute, but cotton growers don’t know how much aid they will get.

By mid-July, many cotton farmers who would have normally sold half of the current year’s crop have yet to market any because cotton prices are hovering in the low-60-cent-per-pound range, below the cost of production in many cases, farmers said. 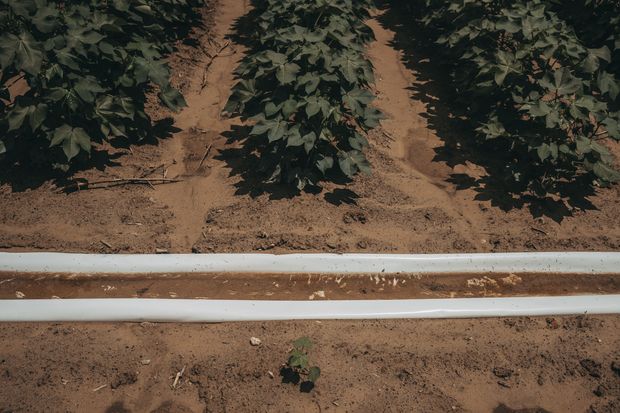 Ramey Stiles’ cotton plants on his farm in Aubrey, Ark.

Jim Jones, who farms 4,500 acres of cotton with his son Caleb in Palestine, took out loans to buy two used baler pickers, for $450,000 each, earlier this year when news of a potential trade deal between the U.S. and China temporarily sent cotton prices higher.

“Chunk of money, isn’t it?” said the elder Mr. Jones of the machines he purchased. “It’s going to be a struggle.” He said he hasn’t been sleeping well for weeks.

Farmers who said they voted for President Trump remain supportive. They back his decision to place tariffs on a range of Chinese products, but if there isn’t a deal this year many won’t survive, they said.

“I haven’t heard anyone start cussing Trump about these tariffs,” said Billy Don Hinkle, who grows 6,000 acres of cotton in Aubrey with a crew of eight men. 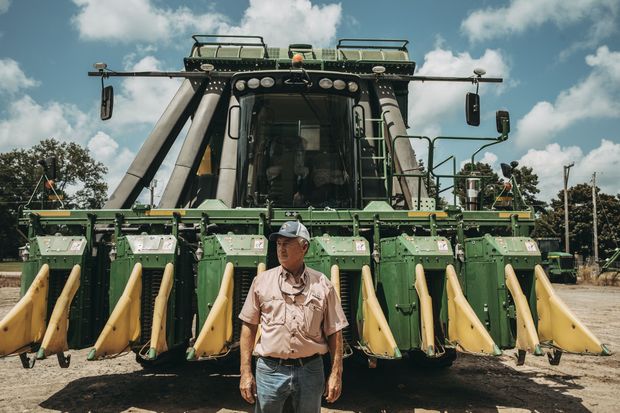 Billy Don Hinkle in front of a cotton picker at his farm.

Meanwhile, farmers are saving money any way they can.

Harris Swayze, a cotton farmer in Yazoo County, Miss., drove three hours to Aubrey last week to buy a used water tank for a cotton picker at Bennett Tractor Parts, which has used machinery lined up on the grass outside the store.

“If you need a part and don’t want to pay the extraordinary prices of the dealer, you come up here,” Mr. Swayze said.

Gary Bennett, a co-owner of the parts company, said his business is up about 20% from last year. “They’re saving a buck every way they can,” he said of farmers in the region.

Mr. Hinkle said he saved labor costs by having his own workers repair a 67,000-pound cotton picker, rather than have it done at the dealer. 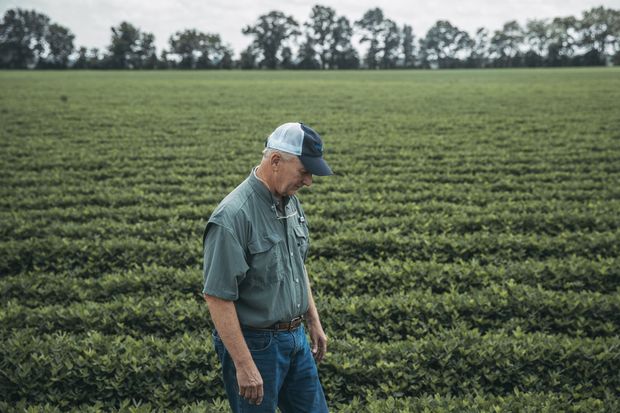 Ramey Stiles walks through his peanut crops, a recent addition to his farm, where he also grows cotton.

Mr. Stiles planted peanuts for the first time this year and invested in a shelling facility being built in Jonesboro. He is now hoping that diversifying his crops will help if cotton prices don’t recover fully.

Larry McClendon, who co-owns a big cotton gin in Marianna and grows the commodity himself on 12,000 acres, said 90% of the cotton he processes is grown by farmers who borrow money each year to farm.

Sitting in his office with a window looking onto the gin’s machinery, he said current conditions are especially hard on a farmer with a young family. “He wakes up under pressure and goes to bed under pressure,” Mr. McClendon said. “If he lets his foot slip, he’s done. He’s got a gun to his head.”