The most recent crop forecast from the U.S. Department of Agriculture revealed that unprecedented spring weather has already negatively impacted production prospects for corn.  Meanwhile, recent news items highlight the ongoing production uncertainty that stems from later than normal planting.  The sluggish pace of corn and soybean crop development, along with planted acreage uncertainty, is also clouding the production forecast.

Earlier this month, Financial Times writer Gregory Meyer reported that, “The US government predicted the lowest domestic corn crop in four years in its first estimates to account for relentless rains that delayed planting across the Midwest. 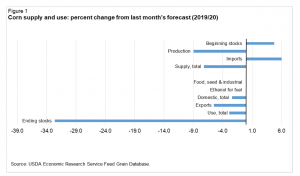 The FT article added that, “Forecasts could decline further as the season unfolds.”

Wall Street Journal writer Kirk Maltais also discussed this month’s USDA report in a recent article, and pointed out that,  “Crop yields per acre, expected to be a new subject of intense speculation by traders over the summer, were estimated at 166 bushels an acre for corn, down 10 bushels an acre from the Agriculture Department’s forecast last month.”

Adam Belz reported this month in the Minneapolis Star Tribune that, “This year will go down as one of the latest plantings in memory. Just over half of the corn acreage in the 18 major corn-producing states was planted after May 25, the USDA says. In a typical year, less than one-fifth is planted that late.

“When planting reaches mid-May, corn and soybean yields drop a little at fall harvest time. But when planting happens after that, yields drop dramatically in the fall since plants have fewer hours to soak up the sun’s energy.

Past studies show farmers can lose up to 24% of their harvest if they don’t plant corn until June 4, and up to 31% if they wait five days longer, according to the University of Minnesota Extension.

The Star Tribune article also noted that, “Soybean planting can happen later, but a June 9 planting loses farmers roughly 24% of their harvest and a June 14 planting loses them 30%.”

Meanwhile, the June Iowa Farm Outlook from Iowa State University Extension indicated that, “For corn, the years with the slowest planting progress were 1983, 1993, and 1995. 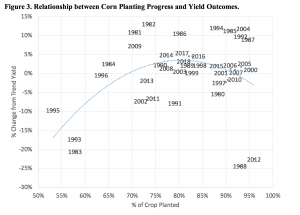 “In those years, yields were at least 10% below trend, and in the case of 1983, 20% below. Based on the estimated relationship, the 2019 national corn planting progress of 50% would point to a 21% decline in yield from trend. The simple linear trend yield for 2019 corn is 173 bushels per acre. The 21% decline would put the national yield in 135 bushels per acre range, with a yield loss similar to the drought of 2012.” 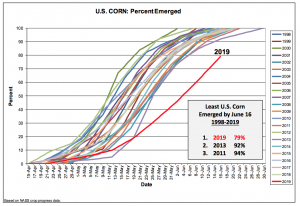 With respect to planted acreage, Bloomberg writers Michael Hirtzer and Isis Almeida reported recently that, “American farmers, already set to leave a record number of acres without corn, now face the prospect of also failing to plant soybeans because of rampant rainfall.

“Growers are expected to file insurance claims on 2.2 million unplanted soybeans acres, or about 890,000 hectares, according to the average estimate among analysts. While some farmers still have time to plant, the estimate would be just below the record of 2.23 million acres that couldn’t be plant with soy in 2015.” 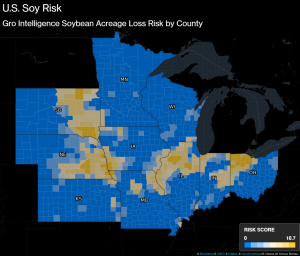 And Laura Reiley reported in Wednesday’s Washington Post that, “Jonathan Kleinjan is an extension crops specialist, someone who educates farmers about scientific research in agriculture, at South Dakota State University. He describes the current situation as unprecedented. In the southeastern part of the state, he says that 30 to 40 percent of corn has been planted, with standing water hurting the likelihood of a decent outcome for acreage planted in May.

“‘The prevent-plant insurance will be enough money to keep you in business for a year unless you were in trouble already,’ he said. But farmers’ decisions to forgo planting will have ramifications for many of the businesses that furnish farmers with equipment and supplies.” 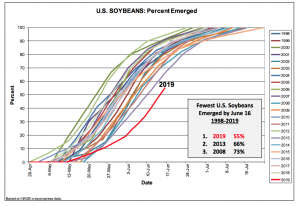 The Post article added that, “On June 6, Trump signed the supplemental appropriations bill that includes disaster aid for farmers and has a provision that would allow payments to farmers for prevented planting. Because details for both the disaster and trade relief packages remain scant, farmers are frequently unsure of which course to chart.”

Corn prices have been on an epic run. Now, soybeans could soon be catching up.

“With more rains forecast for the U.S. Midwest, oilseed plantings are under threat and hedge funds are backing away from their bearish wagers. Meanwhile, corn is heading for its best quarterly advance since 2010 and the funds are betting there’s more room to run, raising their net-bullish holdings to the highest in a year.” 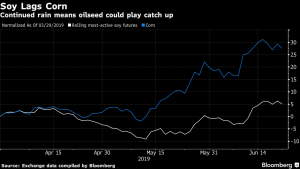 “Soybeans Could Be Next Market to Surge as U.S. Showers Drag On,” by Michael Hirtzer. Bloomberg News (June 21, 2019).

“Fields are still flooded, keeping farmers from seeding and threatening yields. Cooler and wetter-than-normal weather remains in the forecast. The U.S. Department of Agriculture will update its plantings estimate on June 28, but analysts and traders are already concerned the agency’s numbers will be too high and not fully reflect the impact of the deluge.”

Mr. Hirtzer added that, “For soybeans, the trade outlook will also loom large. Donald Trump and China’s Xi Jinping are expected to meet on the sidelines at the Group of 20 summit held in Japan starting June 28. Any signs of an easing in tensions could also spark a move higher in prices. China is the world’s top soy importer.”