Three of the last four farm bills (2002, 2014, and 2018) have authorized an update option for the yield used to determine payments by the price support program.  Each updated yield was calculated using a 4 or 5 year historical window (1998-2001, 2008-2012, and 2013-2017).  Use of a small window amplifies the negative impact of yield-reducing weather events on the updated yield.  This issue was clearly a factor in the House of Representatives’ farm bill.  It authorized a yield update for farms located in a county in which the US Drought Monitor reported a D4 (exceptional drought) in any area of the county for 20 or more consecutive weeks during the 2008 through 2012 calendar years (farmdoc daily, October 2, 2018).  The enacted 2018 farm bill contains a different update provision, but analysis of yields from the Illinois Farm Business Farm Management (FBFM) program finds strong evidence that the enacted update disproportionately increases Price Loss Coverage (PLC) payment yields impacted by the 2012 drought.  However, the analysis finds the 2018 farm bill update does not address an issue tied to rotations.  An option that addresses both issues, a 10-year update window, is examined.

Why Rotation Is an Issue

A 2-crop rotation, such as corn-soybeans (likely the most common rotation), means a 5-year update window has 2 years of one crop and 3 years of the other crop.  A 3-crop rotation, which likely is not a trivial practice, results in a 5-year window having 2 crops with 2 years and 1 crop with 1 year.  Fewer observations magnifies the impact of either poor or good production factors, such as drought.  Moreover, farmers with large operations usually farm over a number of separate locations.  To minimize “production transaction costs,” such as travel time and wear and tear when moving machinery, they often plant a single crop in one location.  Interacting with these considerations is that farmland owners outnumber farmers. In its summary of the sign up for the 2014 farm bill, the US Department of Agriculture, Farm Service Agency (FSA) reports 1.36 million FSA farms with corn base acres and 1.06 million FSA farms with soybean base acres.  In contrast, the 2012 Census of Agriculture reports 0.36 million farms with corn and 0.30 million farms with soybeans.  FSA farms outnumber census farms by 1.0 million for corn and 0.76 million for soybeans.  To summarize, given a 5-year update window, it is likely that a large number of FSA farms have far fewer than 5 years of yield observations for an individual crop, which in turn magnifies the impact of poor and good crop production years in determining PLC program yield.

Owners of farms with base acres for covered commodities are given a 1-time opportunity to update PLC program yields used in determining payments by PLC.  The following formula for updating yields is specified in the 2018 farm bill.

Rationally, an owner will choose the updated yield only if it exceeds existing program yield.  Hence, the update decision is effectively, higher of current PLC base yield and 2018 update base yield.  This choice was similar in all previous updates, including 2014.  The 2014 yield update formula was:

Note, the analysis focuses on the core update formula, not the decision to update PLC base yield.  The analysis does not consider the PLC base yield at the time of the update option.  Nor does it consider that, in the 2014 and 2018 yield updates, an FSA farm’s yield for a given year could be no less than 75% of the average county yield for 2008-2012 and 2013-2017, respectively.

The 2014 farm bill update formula created a clear division across the 3 rotations, especially for Illinois corn.  Update yield for the 50-50 rotation with no corn in 2012 was 10% or 14.4 bushel/acre higher than the update yield for the 50-50 rotation with corn in 2012 (see Figure 1).  The division for soybeans was much smaller:  2% or 1.1 bushel/acre (see Figure 2).  These divisions underscore why the occurrence of droughts in the 2014 farm bill yield update period sparked a desire for a follow-up update in the 2018 farm bill. 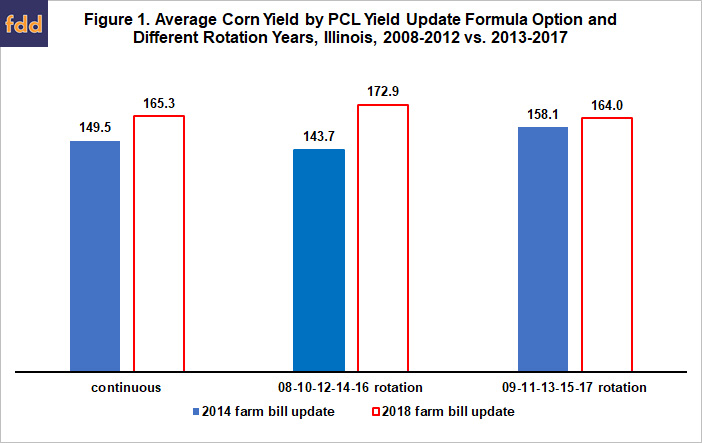 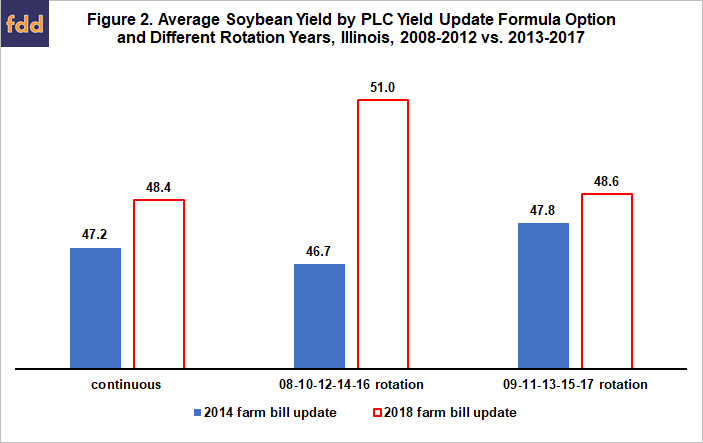 Compared with the 2014 farm bill formula, the 2018 farm bill formula increases the corn update yield by 29.2 and 15.8 bushels/per acre, respectively, for the 50-50 rotation with 2012 corn and continuous corn (see Figure 1).  The comparable increases for soybeans are 4.3 and 1.2 bushels/acre (see Figure 2).  Updated yields increased only 5.9 (0.8) bushels/acre for the 50-50 rotation without corn (soybeans) in 2012.  The 2018 yield update formula thus does disproportionately increase core PLC update yields negatively impacted by the 2012 drought.  In contrast, the definition of drought used by the House farm bill to trigger yield updates would not have permitted an update in the Midwest for the 2012 drought in most situations (farmdoc daily, October 2, 2018). 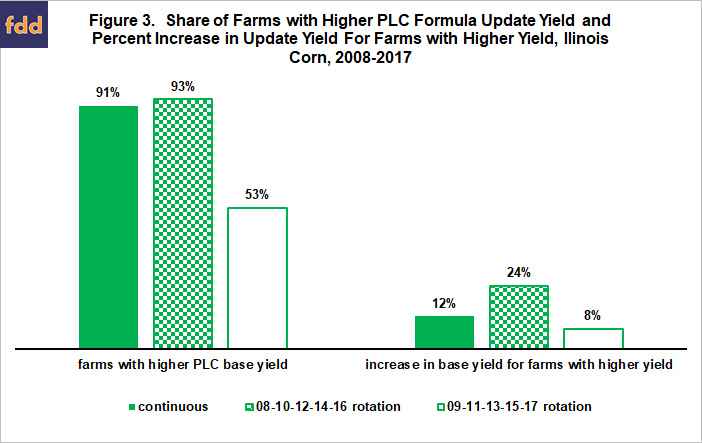 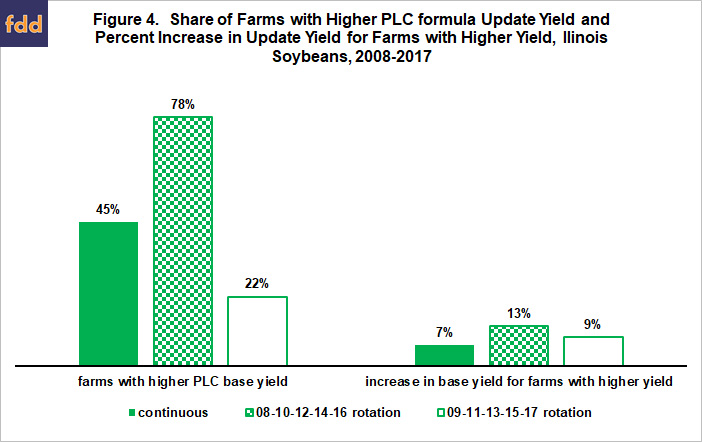 A 3rd update option, a 10 year window of 2008-2017, is examined.  This option reflects the classic statistical response of adding more observations to dampen variation.  With a 10 year update window, both crops in a 50-50 rotation have 5 years of yield in their update calculation instead of 3 or 2 years.

Consistent with Analysis I, the 2018 farm bill yield update formula on average generates a more similar yield than the 2014 farm bill yield update formula across the 3 rotations for corn but not for soybeans (see Figure 5).  However, for both crops, the 10 year update window generates the most similar yields across the 3 rotations. 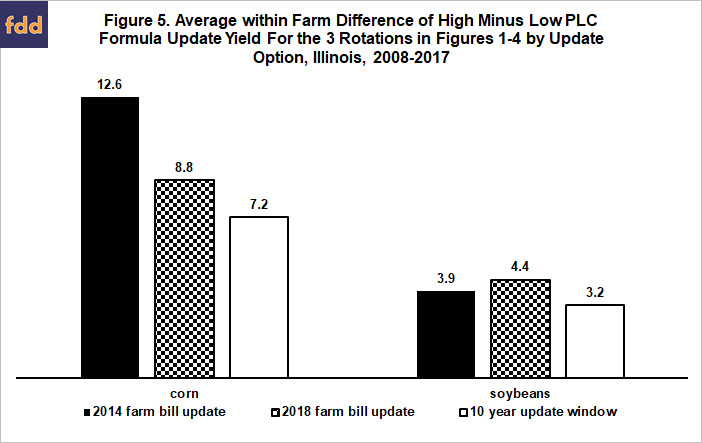