Recent news items have focused on the impacts that African Swine Fever (AFS) in China is having on pork and soybean markets.  Today’s update looks briefly at these issues in more detail.

A recent article in the Agricultural Policy Review from Iowa State University (“African Swine Fever in China: An Update,” by Minghao Li, Tao Xiong, Yongjie Ji, Dermot Hayes, and Wendong Zhang) stated that, “ASF has continued to ravage China’s hog industry with 62 new cases from November 1, 2018 to March 27, 2019, resulting in a total of 114 cases.  The total inventory of hog factories with ASF outbreaks has increased from 61,214 to 319,726 (view our animated map of ASF cases in China). The pace of the outbreaks has somewhat slowed down from more than 20 cases per month in November and December last year to less than 10 cases per month this year. It is possible that the number of cases is greater than that reported, in part because provinces and producers do not have the economic incentive to report.”

The Iowa State University (ISU) update noted that, “According to official reports, the number of culled pigs is modest—916,000 as of January—but recent inventory statistics show a much larger impact. In December, January, and February, hog inventory dropped by 3.7 percent, 5.7 percent, and 5.4 percent respectively, a total of 14.1 percent, or 45 million pigs(see Figure 1  below). During these three months, sow inventory, which determines production capacity in the next year, also decreased by 13 percent, or 4 million sows.” 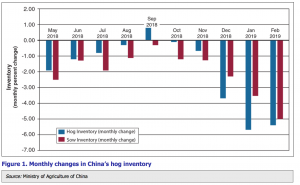 With respect to market impacts, the ISU report explained that, “The damage of ASF has already significantly influenced China’s pork imports. After the initial tariff increase on US pork in April 2018 , pork exports to China reduced to a trickle. In December 2018, US exports to China started to pick up with 7,823 metric tons of pork exported by the first week of January 2019. After several weeks of zero exports, trade resumed with 17,215 metric tons exported in the second week of February 2019.

The net sales of 23,846 metric tons in the first week of March was the third-largest weekly sale since USDA started publishing weekly country-specific export data. 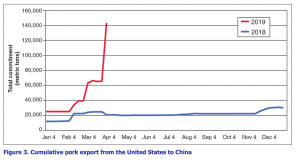 In more detailed reporting on the AFS impacts on the pork market, Bloomberg writers Irene Garcia Perez and Aine Quinn reported on Thursday that,

Meat processors around the world are selling more pork to China to make up for shortages caused by an outbreak of African swine fever.

“The consequence is tighter supplies in the U.S. and Europe, which is pushing up prices. The trend is likely to continue as the disease quickly spreads throughout China, the world’s largest producer and consumer.” 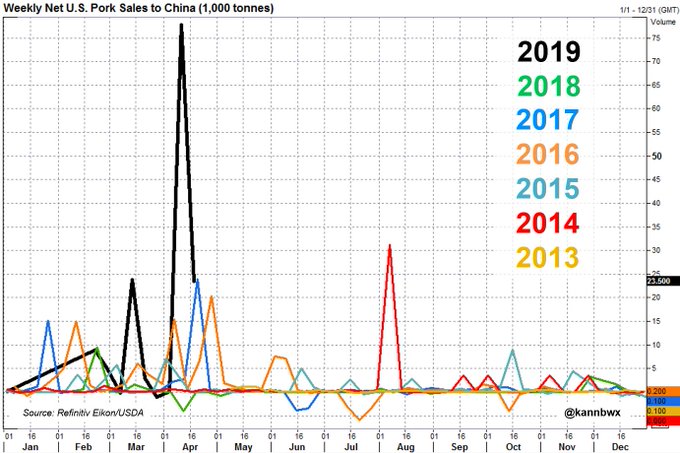 #China made its 5th largest ever purchase of U.S. #pork in the wk ended April 11 of 23,500 tonnes, despite huge tariffs. Last week was the largest ever at 77.7k, and the week ended Mar. 14 was 4th with 23.8k. They are clearly experiencing or anticipating a meat shortage from ASF.

The article indicated that, “The extra demand will likely benefit farmers, who can sell their hogs for higher prices. Producers may start to breed more livestock, but the process takes time.” 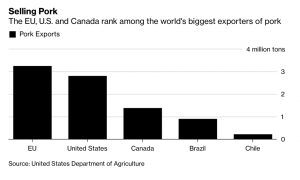 Also last week, Reuters writer Dominique Patton reported that, “Chinese pork prices are set to jump 70 percent in the second half of the year, a senior official said on Wednesday, after data showed an outbreak of African swine fever cut the world’s largest hog herd by 10 percent in the first quarter.

China’s pork output slumped in the first quarter of this year. It is the world’s top producer of “the other white meat” as it’s called. It continued its battle against the spread of African Swine…

“China’s pork production fell 5 percent in the first three months of 2019 and much bigger declines are expected in coming quarters, analysts said, as the country struggles to contain the spread of the deadly disease.”

And Wall Street Journal writer’s Zhou Wei and Lucy Craymer reported in Thursday’s paper that, “The world’s largest consumer of pork, China has been forced to turn increasingly to the U.S., Europe and elsewhere to meet demand. The U.S. confirmed last month that China had made its largest purchase of American pork since April 2017. And since the beginning of March, U.S. lean-hog futures on the Chicago Mercantile Exchange have risen 59%.”

“Getting rid of the disease and rebuilding the herd in a nation that consumes half the world’s pork will take three to five years, curbing demand for soybeans used in feed, according to analysts.”

The article noted that, “Given China is the largest soybean importer and most of its shipments usually come from the U.S., the oilseed has been the poster-child for the tit-for-tat tariff spat. While trade tensions have prompted China’s feed makers to curb the oilseed’s usage, it’s the pig virus that will upend the market. The U.S. Department of Agriculture and INTL FCStone Inc. are already forecasting a decline or slower growth in Chinese soy imports for the next couple of years.”

Last month, an update from the USDA’s Foreign Agricultural Service (“China- Oilseeds and Products Annual“) stated that, “China’s demand for oilseeds and oilseed products will continue to climb in MY19/20, albeit at a slower pace due to African Swine Fever (ASF). The projected MY19/20 demand recovery is attributed to increased meal demand as chicken, cattle, and aquaculture production is forecast to grow to meet rising consumer demand for alternative animal proteins. Although pork remains the preferred meat for most Chinese consumers, the ASF outbreak has bolstered demand for chicken, beef, and seafood out of unfounded health fears, price considerations, and a desire to diversify the diet. Domestic production will remain sluggish, and China will continue to require oilseed imports to meet demand.”

The FAS update also pointed out that, “China continues to diversify its basket of soybean suppliers. The addition of Ethiopia to the list of countries with market access to export soybeans to China brought the number on this list up to nine, including Argentina, Brazil, Canada, Ethiopia, Kazakhstan, Russia, Ukraine, the United States, and Uruguay. However, Ethiopia’s limited production will mean negligible Ethiopian exports to China for the foreseeable future. According to an August 2018 report by Chinese industry, the Russia government intends to cooperate with China in the far-east region to expand land for soybean planting by 1 MHa. This may provide an additional 3 MMT of soybeans to the market in the long term.

“As [the chart below] indicates, the United States had about a 28.7 percent share of China’s total MY17/18 imports, while Brazil’s share was about 58.2 percent.” 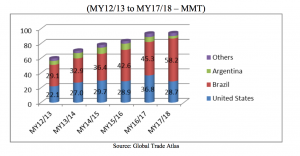 In addition, the April “Oilseeds: World Markets and Trade” report from USDA’s Foreign Agricultural Service stated that, “For the week ending March 29, 2019, U.S. 2018/19 soybean export commitments (outstanding sales plus accumulated exports) to China totaled 12.9 million tons compared to 28.7 million a year ago. Total commitments to the world were 43.6 million tons, compared to 51.5 million for the same period last year.” 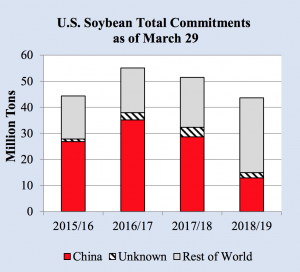 More broadly, Bloomberg writers Michael Hirtzer and Dominic Carey reported that, “Shipments of American soybeans are at the lowest level since before the U.S.-China trade war in what could be a worrying sign for growers hoping for the Asian giant to accelerate purchases ahead of a trade deal.” 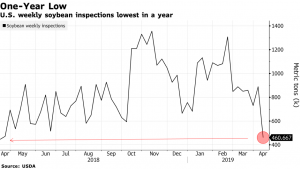 The Bloomberg article noted that, “Total U.S. soybean exports reached 460,700 metric tons last week, down from 888,700 tons in the previous week and just above 446,500 tons in the same week a year ago, according to weekly inspection data released by the U.S. Department of Agriculture on Monday. Of the soy shipments last week, 130,200 tons were loaded for China.”